10 Artworks That Perfectly Capture The 1990s In Barcelona 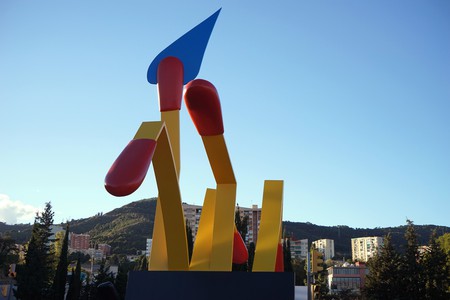 Any work of art gives invaluable insight into life at the time of its creation, and any understanding of Barcelona in the 1990s must necessarily pass through its artistic realm. The final decade of what was a hugely tumultuous century for Barcelona was fittingly transformative, since by this time the tide had finally seemed to be turning in the city’s favor. The unprecedented economic, social and cultural impact of the 1992 Olympic Games has been well documented, and it will be no surprise that much of the works included were the direct result of the games. However, whether commissioned or otherwise, one thing is for sure – the cultural revolution in 1990s Barcelona did not occur in galleries, it took place on the streets. 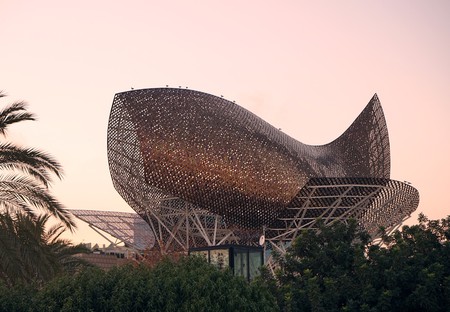 Elusive in a simmering semi-translucent structure, an undulating form of a fish rises in between two towers, as though presiding over the newly constructed port on a temporary sojourn on land, before diving back into the Mediterranean. Catch it at a certain angle in certain lighting, it’s as though the previous illusion is broken and you see the structure as a flat surface of material forever caught in the moment the wind has caused it to billow, and coincidentally appear as a fish, or bird, or whatever form the viewer perceives in that fleeting frozen moment. The renowned Canadian architect Frank Gehry was commissioned by the Olympic committee as part of the construction of Port Olympic. The fish signifies a change from a city which previously ‘had its back to the sea’, to one that looks out towards the coast proudly. Constructed from intertwining gilded stainless steel strips, the shimmering gold of the 56-metre-long fish can represent the ‘gold effect’ of the economic post-Olympic upturn.

Look away from the coast towards the mountains that encircle the city and you’ll be greeted with space age structures soaring into the sky alongside the domes and turrets of the traditional castles and palaces. These towers were conceived with functionality, as well as form, at their core, and they illustrate the desire to address practical concerns (in this instance, how to transmit the games) in a manner which contributed to the iconography of the city. 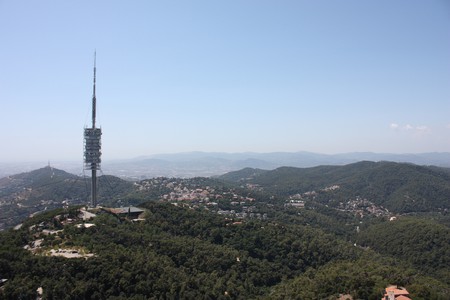 The renowned English architect was commissioned to design this, the highest point in Barcelona. The multitude of satellite dishes suggest extra terrestrial communication, while the structure is physically anchored to the mountain by cables acting like guy ropes, as though to inhibit the possibility of interstellar movement. 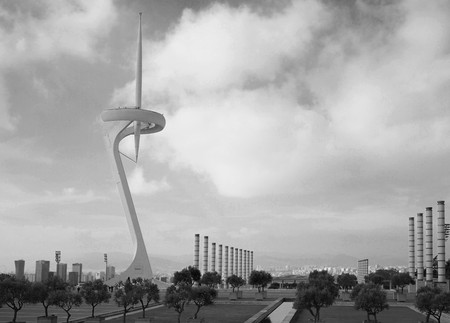 The inspiration for the Montjuïc tower was an image of an athlete carrying the Olympic flame, but the pristine white marble-like form could easily be a minimalist sculpture. Reminiscent of skeletal forms or marine life, the base of the structure is covered in glazed tiles, elements that pay homage to Gaudi, fusing the contemporary with the history of the region. 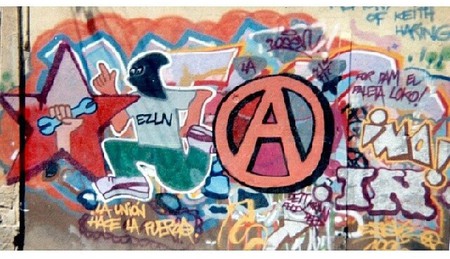 Perhaps in part a direct reaction against the imposition of art and architecture on the city from the government and Olympic committee, the 1990s marked the beginning of the street art revolution which was to take hold of the city well into the new millennium. The notion of communicating via the city walls was nothing new to a city where the streets had been used by the fascists and communists alike to disseminate propaganda, but now for the first time it was the regular people who were speaking. Amongst a crew of many, protagonists included Sixe Paredes, a self-proclaimed ‘primitive futurist’, whose work references symbols of the primordial, ancient cultures and the natural world, and Zosen, a prolific artist since the early 1990s whose murals were typified by neon colours, geometric shapes and playful characters. 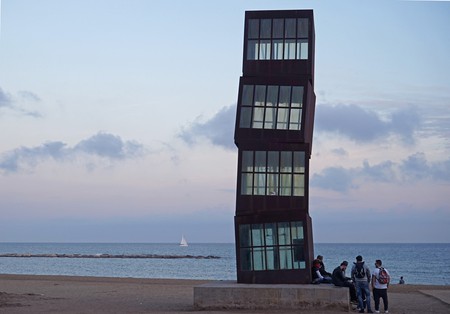 ‘Los cubos’, ‘Homage to a wounded star’, call it what you will, most people who have visited Barceloneta beach will have seen the four cubes precariously balanced on top of one another, designed by German contemporary artist Rebecca Horn. Apparently paying homage to the recently disappeared ramshackle chiringuitos (beach bars) from the pre-Olympic run down beach, the structure also echoes the small jumbled apartment buildings of the traditional fisherman quarters in Barceloneta. The fact that the structure looks out over the sea has led some to compare it to a lighthouse, but despite the windows, there are no viewers within to keep watch over the coast, giving a melancholic mood to the piece. In spite of this, it has become a structure firmly rooted in its surroundings, with beach goers using it as a meeting place, and today it has become a symbol of the newly revamped beach. 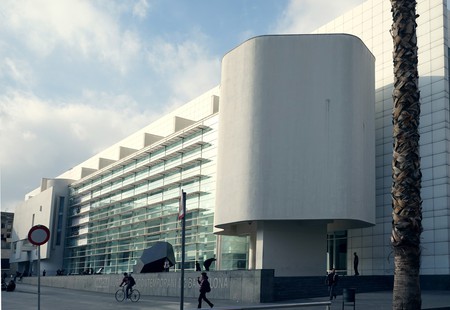 All modern cultural capitals need a contemporary art museum, and although the idea for one in Barcelona was conceived of in 1959, it wasn’t until the 1990s that the city was granted one. As was the style of the 20th century, gone is the notion of an austere stone mausoleum, the contemporary art building is as much a piece of art as that contained within it. Designed by architects Richard Meier and Renny Logan, MACBA rises as a beacon of white geometry out of the dark narrow medieval streets of Raval. Meier states that building projects are essentially ‘an effort to create order out of chaos’ and the choice to place the new cultural capital in the chaotic, underprivileged immigrant area illustrates this. The design of the interior echoes the linear organization of the winding Gothic streets with natural top lighting as though the sun is making its way through the balconies from the narrow street openings, while the exterior provides a light-filled cultural and social heart for the much-maligned barrio, a place for culture lovers and skaters alike.

Up in a suburban barrio hidden in the hills, close to a hospital, sports stadium and little else, the humble match emerges unexpectedly and takes on a new life. Very much within the artists’ oeuvre, where the everyday becomes the monumental, the work, showing 22-metre high box of matches, plays with scale, movement and pop-art style simplicity. Giving physical form to the energy present in the city at the time, we catch one match at the point of ignition, the blue flame forever at the point of starting to burn, perhaps predicting the longevity of the Olympic legacy. Nearby spent matches are discarded and scattered on the pavement. It is unlikely a coincidence that the yellow and red lines of the matches are topped with the blue flame, visually echoing the Catalan flag of independence. 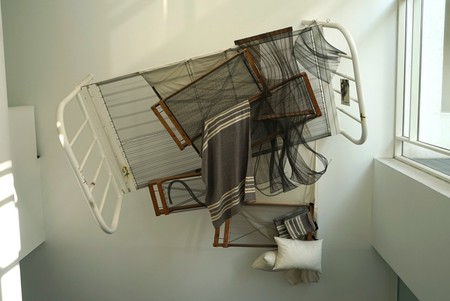 Originally conceived for the Spanish Pavilion at the 1993 Venice Biennale by Tapies, one of the most influential Catalan artists of the 20th century, this work is now housed in the MACBA. Consisting of an upturned hospital bed attached vertically to one of the gallery walls, a large painting and rows of chairs outside on the terrace, the work was apparently inspired by a childhood memory of the artist but the symbolism evoked by the crosses and scrawled words, including ‘sàbat’ (Sabbath), suggests more collective themes of religion, conflict and war. The title orginates from the Japanese for ‘sudden awakening’, and the empty chairs and bed eerily encourage meditation on an unseen event which may have occurred, with unknown consequences.

Deuce Coop | By Enfo (Own work) via Wikimedia Commons

Turrell’s contribution to the Olympic public art commission features his iconic use of light and colour applied to an 18th-century building in the heart of the medieval centre. This acknowledgement of the past is essential in a city with such a wealth of well-preserved architecture, here transformed in a neon bath of light. Turrell’s work focuses on the transformative capabilities of light and space, and in this installation an otherwise overlooked doorway becomes a transcendental, meditative space. Turrell’s piece can be read as a symbol of how the historic and contemporary can co-exist, and even improve on one another. 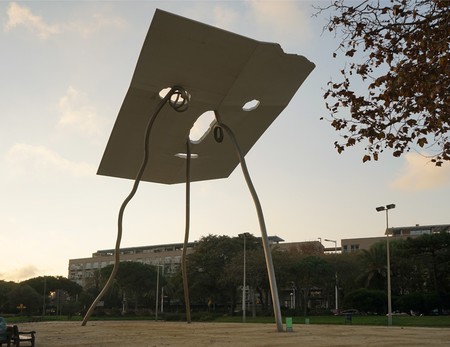 Ironically, this public sculpture aimed to criticise the very Olympic urban planning project which indirectly led to its creation. As the name suggests, the work aims to champion the underdog, and stands as an ‘anti-monument’ to the locals who had little say over the re-structuring of their surroundings. Standing in a park that had once been a residential neighbourhood, the structure is at once monumental and ephemeral, rooted to the ground and seemingly caught at the point of flight. A paper-like cut-out ’mask’, representative of drying laundry from balconies long demolished, is supported by delicately winding spindles. Standing uncertainly yet proudly, this David dominates the stark, impersonal surroundings.