10 Paintings and Artworks By El Greco You Should Know

Doménikos Theotokópoulos, better known as El Greco (Spanish for “the Greek”), was a Greek painter who spent most of his life in Spain. He broke away from the traditional Renaissance style to embrace an aesthetic that was entirely his own, imbuing his works with incredible emotion, distorted bodies, dramatic color and arresting light. He was very much ahead of his time with an unusually modern eye, and his work served as the precursor to 20th century Expressionism and Cubism. Here are ten extraordinary paintings and works by El Greco to know.

One of El Greco’s earlier works, Christ Healing the Blind was painted during the artist’s time in Italy – either Venice or Rome. For many years, the painting was attributed to Tintoretto and then Veronese; it wasn’t until the late 1950s that experts finally declared that it was actually an El Greco. One of three paintings he did of the same subject matter, the work depicts Christ, robed in pink and blue, healing a blind man who is knelt in front of him. There are two groups to his left and right, plus two men and women in the foreground and background. The artwork was never finished, but it can nevertheless be seen in all of its brilliance at New York City’s Metropolitan Museum of Art. 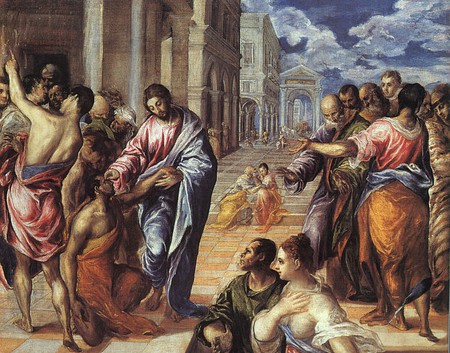 The Disrobing of Christ is located in the Sacristy of the Cathedral in Toledo, Spain. El Greco moved to Toledo in the mid to late 1570s, and shortly after his arrival, church officials commissioned him to paint The Disrobing, which has hung in the cathedral ever since (except when it was restored at the Prado Museum in Madrid). The artwork has a strange modern quality with El Greco’s signature distortion and use of bright colors. This work is somewhat subdued with a shadow blanketing most of the figures surrounding Christ to draw the viewer’s undivided attention to the painting’s foremost subject. Christ’s radiating light illuminates three women below, all of whom are thought to be Mary. 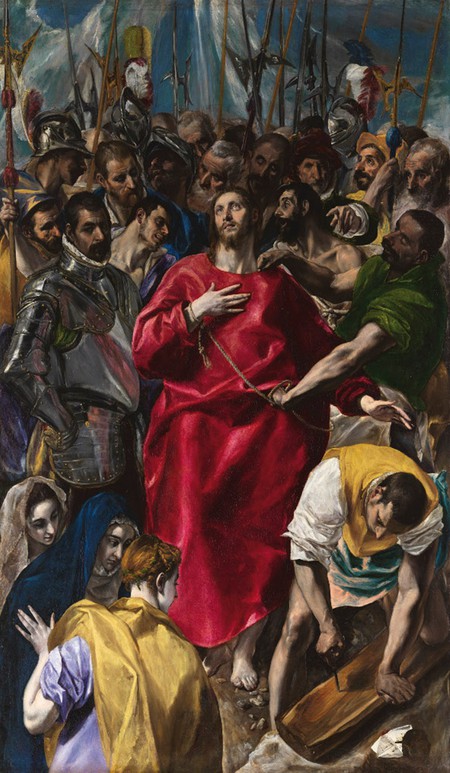 While El Greco is best known for his religious works, he also produced several portraits. One of his finest examples, The Nobleman with his Hand on his Chest is a bust-length portrait depicting a gentleman around the age of 30. Donned in traditional Spanish clothing, the subject, who stares intensely at the viewer, has his right hand resting on his chest. The painting is void of the artist’s usual bold colors, instead utilizing muted, dark tones, with the white of the ruffs standing out the most; however, the exaggerated, elongated fingers are present. This artwork currently resides in the Prado in Madrid. 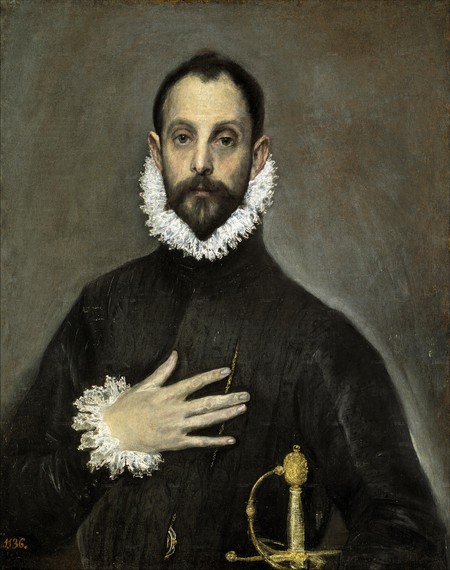 The Burial of the Count of Orgaz is seen as the best-known work by El Greco. The large painting, a little over 15 by 11 feet, is found in the Iglesia de Santo Tomé in Toledo and depicts the well-known legend of Don Gonzalo Ruíz, a charitable man. The story goes that when he passed away, both Saint Augustine and Saint Stephen came from the heavens to bury him, with everyone who attended the burial standing in awe. The painting features two contrasting parts: the static bottom half with the local townspeople, priests, saints and the body of the Ruíz and the top half, which is an organic, free-flowing vision of heaven. 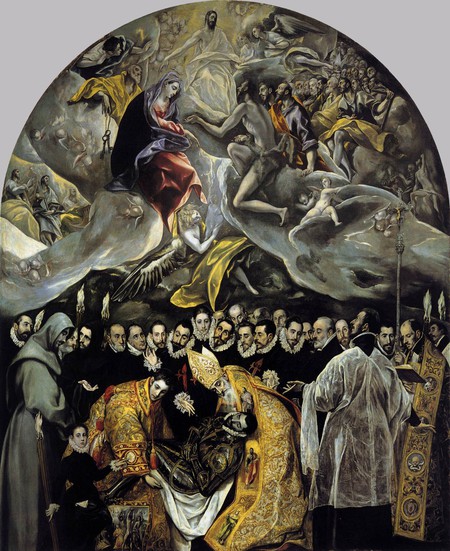 Madonna and Child with Saint Martina and Saint Agnes (1597-99)

Once placed opposite of Saint Martin and the Beggar (see below) in the Chapel of Saint Joseph in Toledo, Madonna and Child with Saint Martina and Saint Agnes depicts just that. On view at the National Gallery of Art in Washington D.C., this is a lovely work with Mary and baby Jesus seated on fluffy clouds in the skies surrounded by angels along with Saint Agnes on the bottom right and Saint Martina on the bottom left. The painting is a wonderful display of El Greco’s use of vibrant colors that he was known for, complete with pinkish-reds, greens, blues, yellows and reddish-oranges. 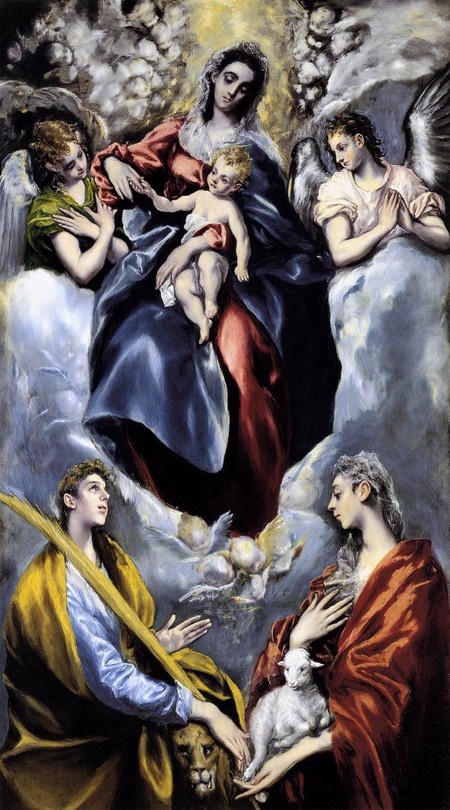 Also in the collection of the National Gallery of Art, Saint Martin and the Beggar depicts Martin of Tours, a soldier who shared half of his cloak with a poor man (beggar) he came across. Christ visited Martin in a dream telling him that what he did for that man, he did for Christ himself; after that, Martin dedicated himself to Christianity. Commissioned by Martín Ramirez for the Chapel of San José in Toledo, the painting has a monumental quality to it with the saint on a powerful white horse, both of whom almost fill up the entire space. To the left is the nude beggar, whose body is distorted, partially covered with a bright green piece of fabric. 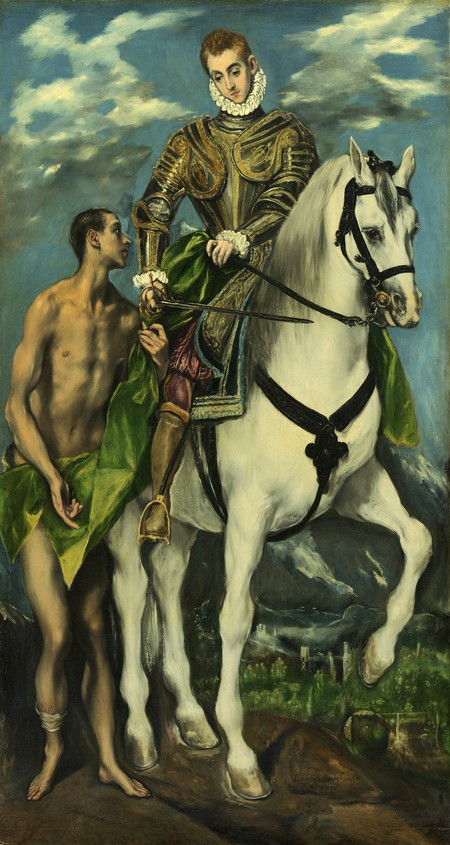 In addition to religious artworks and portraits, El Greco also created incredible and rare landscapes, such as the View of Toledo, a masterpiece and best representation of his work in this genre. When looking at this piece, viewers might have a sense of panic as the painting features menacing, dark clouds rolling in from beyond, with the ability to create a powerful storm battering the verdant land below. As one of the only surviving landscapes by El Greco, not a lot is known about its beginnings except for inventory records, and unfortunately, nothing concrete can be deduced from those. Like Christ Healing the Blind, this artwork can also be found at The Met. 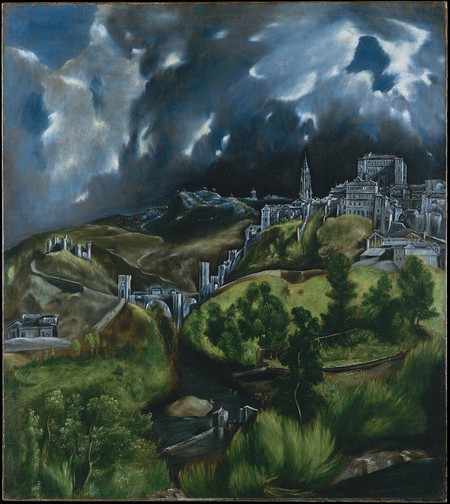 The Opening of the Fifth Seal, also known as The Vision of Saint John, is another wonderful example of modern-like qualities present in El Greco’s work. Depicting a biblical story from the Book of Revelations, the figure of Saint John, who is in a state of ecstasy and dressed in a blue robe with sharp folds, stands out in the painting. Behind him are a series of nude figures who are in the process of being draped with colorful robes in yellow, green and white. A great example of his late style, the painting was, indeed, one of his last works and remains unfinished. A fragment from an altarpiece, the painting was an inspiration to modern greats such as Picasso. It is also located at the Met. 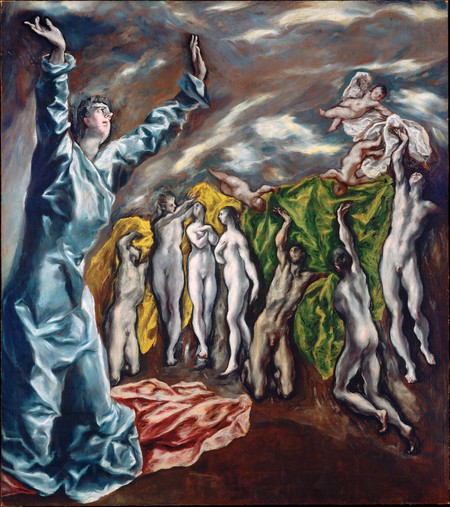 El Greco, The Opening of the Fifth Seal, 1609-14 | © Metropolitan Museum of Art/WikiCommons

Another late work, Laocöon is El Greco’s only painting that survives depicting a mythological theme. Another artwork housed in the National Art Gallery’s permanent collection, the painting shows the dramatic moment when Laocöon, who was a Trojan priest, and his sons were killed by sea serpents after warning his fellow countrymen about the Trojan Horse. The gods were not pleased, thereby, setting up the family’s demise. With a backdrop of Toledo, the artwork exudes emotion as one son is dead and Laocöon and his other son are fighting the serpents with everything they have. The figures are pale gray in color, alluding to the fact that life is slowly being drained from their bodies. It is a powerful piece that can be viewed at the National Gallery of Art. 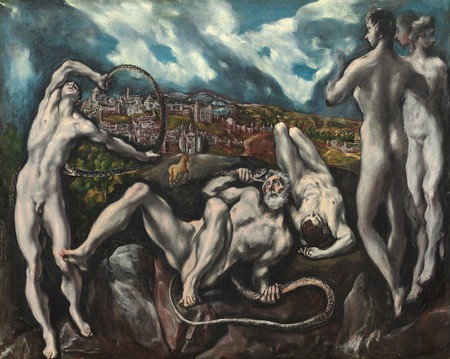 The Adoration of the Shepherds is often referred to as El Greco’s last work, as he died on April 7, 1614. In a nighttime, grotto-type setting, Mary is holding baby Jesus while Joseph and the three shepherds surround them, lovingly gazing at the newborn, completely devoted and enchanted. The entire group, along with the angels overhead, are washed in a brilliant and beautiful glow. Until 1954, the painting hung in the Monastery Santo Domingo El Aniguo in Toledo – a befitting place as it was the locale where El Greco had his first commission in the country – before being purchased by the state. Art lovers can view this masterpiece in the Prado. 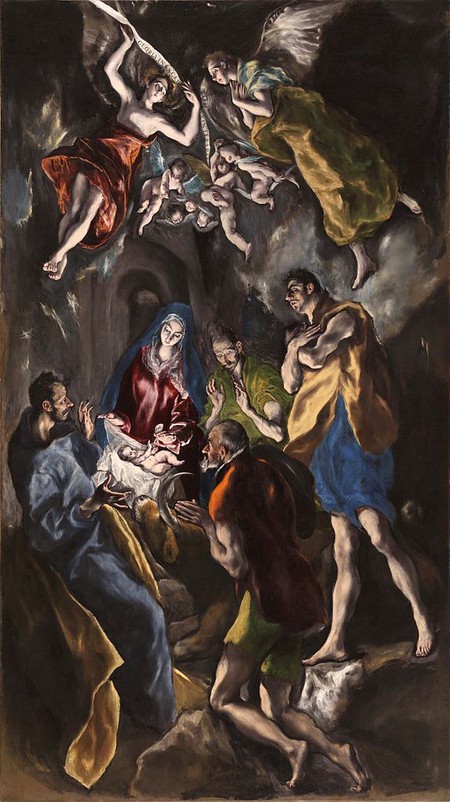 El Greco, The Adoration of the Shepherds, 1612-14 | © Museo del Prado/WikiCommons
Give us feedback