10 Amazing Things To See & Do in Almería 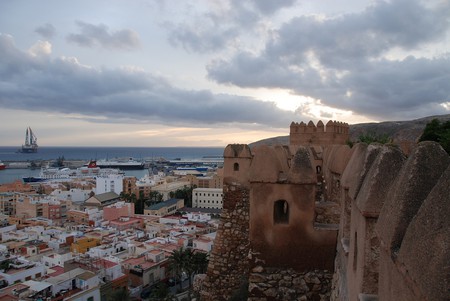 Located in the sunny Andalucía, in the south of Spain, the city of Almería perfectly combines historical beauty with modern charm. Between the historic quarter, sightseeing attractions, shopping hubs and gorgeous museums, this city offer many diverse attractions to intrigue every type of traveler. Here is our list of the ten most amazing attractions that you can’t miss while visiting Almería.

The Alcabaza is probably the most famous and most visited attraction of the city of Almería. The name of this magnificent old fortress comes from the Arabic word al-qasbah, or fortified city. The construction of the Alcazaba began in 955 when Almería was named medina (“city”) by the Caliph of Cordoba. This fortress was meant to be the seat of the local government, so houses, squares, and a mosque were also built within its system of defensive walls and towers. There is a total of three walled layers of fortification, constructed in different eras for different purposes. The first enclosure was built as a shelter for the population in moments of extreme danger. The second was the residence for the governors and their families, while the third and most recent was commissioned by the monarchs Isabella of Castile and Ferdinand of Aragon to create the most secure area in the city.

Price: free admission to citizens of EU countries, £1.50 for travelers from non-EU countries

Perched on a hilltop across to the North of the Alcabaza you’ll spot a second fortified structure, the Castillo de San Cristobal. The hill on which it resides is called the Cerro de San Cristobal today but was once known as Laham Hill in the Muslim era of the neighborhood’s history. The hill is ringed by ancient ruins of protective walls built in the 11th century in the Kingdom of Jairán, and studded with old towers reflecting this area’s eclectic military history and resulting changes in culture. Of the seven towers on this hill, you’ll see three square ones constructed by Ancient Muslim architects, and four semicircular ones built by Christian Templars after Afonso VII’s Christian conquest of the city in 1147. The Castillo itself was constructed as a Muslim military fortress and is now a historic ruin protected under Spanish Heritage laws. This is a great place to examine the rich, varied layers of Almería’s history and take in an impressive view of the modern city.

Watch out for: a large marble pedestal representing the Sacred Heart of Jesus, a gift from the nearby village Macael to bless Almería 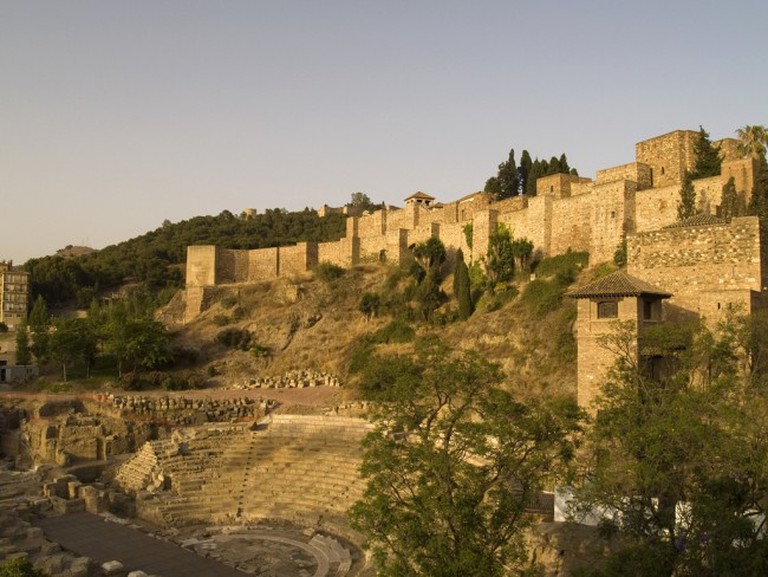 The Alcazaba of Almería | © Fernando Vivar/Flickr

These air raid shelters are a testimony of the brutal conditions Almería’s population endured throughout the Spanish Civil War. From 1936 to 1939, the city suffered up to 52 bombings from air and sea, which amounted to a total of 754 bombs. The air raid shelters could protect up to approximately 40,000 civilians and equipped with a surgery,- and a food storage room. They also kept Almería’s people safe during the Second World War, which overlapped with the Spanish Civil War in 1937 when the city was extensively bombed by the Nazis. These shelters saved and preserved many lives in a time of horrific conflict, and in return, the citizens of Almería have kept the structure itself impeccably preserved to this day.

The Cathedral of Almería

The Cathedral of the Incarnation of Almería is the seat of the Diocese of the city of Almería. This site was holy ground long before the Cathedral was built, as a mosque once stood in the same place until it was destroyed by an earthquake in 1522. Two years after that, the construction of the Cathedral began in 1524. Completed almost 40 years later, the building’s architectural style reflects a combination of Gothic and Renaissance influences. The two towers visible from the façade, together with the merlons and protected paths, make it look more like a fortress than a cathedral. This is no accident. These forbidding defensive features were intended to protect the cathedral from pirate raids.

Watch out for: the defensive details like the merlons and watchtowers 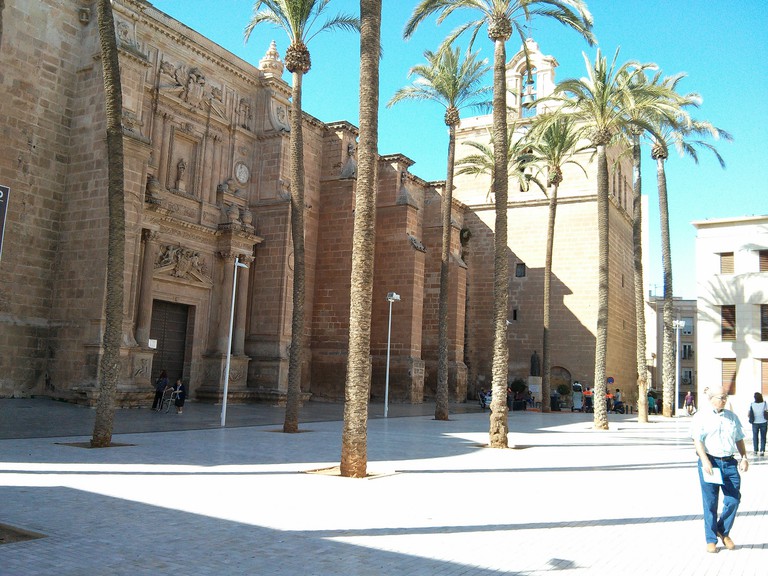 The Cathedral of Almería | © Martin Stone/Flickr

Housing the region’s largest collection of priceless archaeological remains, the Museum of Almería is easily one of the most important museums in the whole province. The building itself is nearly as impressive as its contents. Designed by Ignacio Garcia Pedrosa and Angela Garcia de Paredes in 1934, this 80-year-old architectural feat was freshly recognized with a series of awards and honors in the mid-2000s and became the new home of Almería’s most treasured artifacts in 2006.

Watch out for: stunning architecture outside and one-of-a-kind ancient relics inside

Sightseeing and shopping on Las Ramblas

Las Ramblas are a series of rambling, walkable routes combining the main avenues of the city, beloved by locals and tourists for its tree-lined sprawl of bustling shops and cafés. Avenida de Federico Garcia Lorca offers many cafés and playgrounds for children en route to Almería’s port and beaches, along with several picturesque water fountains. Avenida del Mediterraneo is a central hotspot because of its bus and train stations. Conveniently, it also hosts the most beautiful hotels in the city and the popular Mediterraneo shopping center. Paseo de Almería is also all about shopping, packed with malls and an abundance of little boutiques which overflow onto neighboring side streets. For those who want a peaceful promenade surrounded by nature, head down Calle de Coches to stroll past beautiful gardens and shady palms while admiring the sparkling seaside.

A trip to any major Spanish city is not complete without visiting its plaza de toros, or bull ring. The Plaza de Toros of Almería was built in 1888, and its two levels can host over 9,000 excited spectators during one of its thrilling corridas. The ring was built using only the finest materials available, resulting in a beautiful building which has stood the test of time to attract new admirers today. One peculiarity of the corridas in Almería’s Plaza de Toros is that they incorporate the Spanish afternoon snack time merienda into their bullfighting schedule, taking a thirty-minute intermission during the corrida between the third and the fourth bull appearance.

Price and hours vary by event: check the website for the full schedule and ticket pricing

Watch out for: Dazzling matador outfits and leisurely meriendas 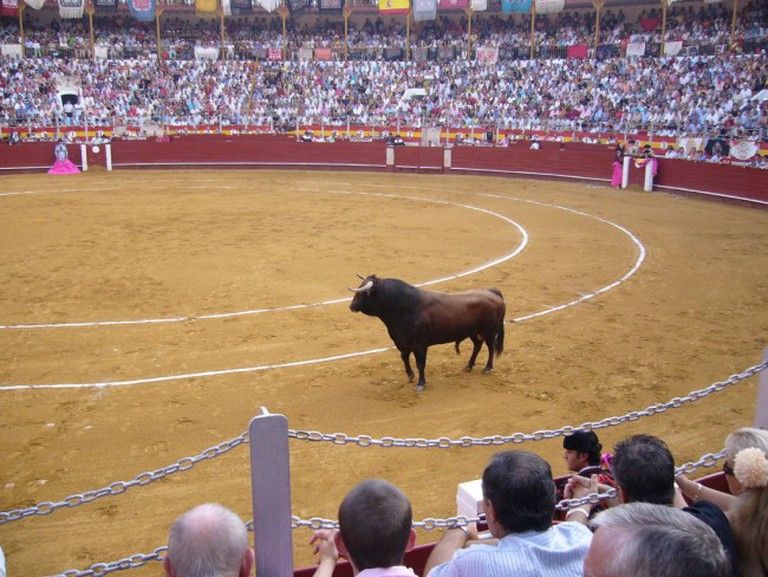 Part of Almería’s old town today, this barrio was once known as the cave area of the city. Even today, some people continue to live in these dimly-colored little houses which are partly carved into the rocky hillsides of the Alcazaba. Many artists have chosen this area as the subject of their impressions due to its particular, nostalgic beauty. On the weekends, tourist trains out of Plaza de Emilio Perez offer an easy, relaxing ride in and out of the Barrio de la Chanca, as well as to the port quarter if you’d like to continue your trip. Check the departure timetable at the official Almería tourism website to plan your own excursion.

Also located in the old quarter, the Aire de Almería stands as a reminder of the underlying Arabic influence on the culture and society of these Spanish coasts. What used to be an Arabic souk has been restored and transformed into traditional Arabic baths, where the ancient ritual of Arabic bathing combines with a luxurious environment for a day of blissful relaxation.

Almería’s beaches are among the most popular in the whole Spanish coast. The most well-known shores are the Southwest Poniente beaches and the Southeast Cabo de Gata cape. Though these beaches attract many tourists and locals, it’s still possible to find quiet stretches of sand between the crowds. The smooth, welcoming sands of the Poniente beaches to the west are the biggest crowd pleasers, while the beaches to the east along the Cabo de Gata are more rural and wild, leading into the Cabo de Gata Natural Park. However, it’s also possible to pamper yourself on the cape, since the El Toyo and Retamar resorts are both located here.