In 2012, the Museum of Modern Art in Ljubljana held a retrospective of Metka Krašovec’s work in celebration of her 70th birthday, giving such an honour to a female painter for the first time. Pik-Shuen Fung explores the work of this exciting artist and the duality that can be seen in her art. 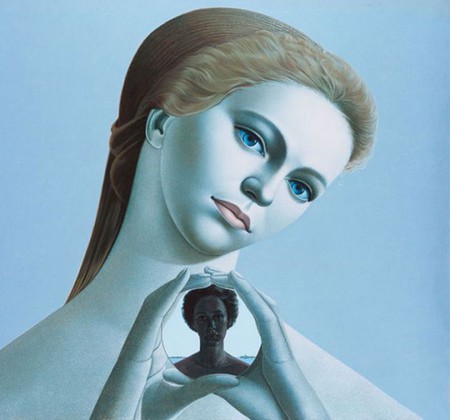 Though relatively unknown to the rest of the world, Metka Krašovec is one of the most important painters in contemporary Slovenian art. In 2012, the Museum of Modern Art in Ljubljana celebrated her 70th birthday with a comprehensive retrospective of her work. This marked the first time such an honour was given to a female painter. The exhibition showcased four decades of uninterrupted work, spanning four artistic periods in her life. Though the subject and style of her art have changed significantly over the years, Krašovec’s work is fundamentally an introspective inquiry, driven by her search to reconcile two opposing internal voices.

Born in 1941 in Ljubljana, Krašovec constantly moved with her family during her childhood. She lived in Belgrade, San Francisco, and New York before returning to Ljubljana, and saw herself as a foreigner wherever she went. To this day, she has said that she feels she can easily live anywhere and feels at home nowhere. Despite disapproval from her family of her decision to pursue a career in art, she graduated in 1964 from the Ljubljana Academy of Fine Arts, having studied painting under the influential Professor Gabrijel Stupica. She went on to complete postgraduate studies in painting and a Masters of Graphic Art, before continuing her education at universities in the US and the UK. After returning to Ljubljana, she joined the faculty at her alma mater, becoming one of the youngest professors to teach there.

In the 1970s, Krašovec worked intensively with the colour red. In her early red paintings, her subjects were the exteriors of imposing churches and cathedrals, but these eventually evolved into austere interiors of homes, and finally, hospital beds. There is an unsettling quality about these monochromatic paintings; a strange contrast between the impact and intensity of the red and the lifeless structures and objects depicted with highly controlled brushwork. The absence of people in these paintings is pronounced, and the result is a haunting emptiness. In her autobiography, Krašovec notes that she wanted to stay with the colour red for as long as she could, and get as much out of the hue as possible. For her, the period of red paintings was a time of great love, but also, because of her mother’s impending death, a period of great pain. 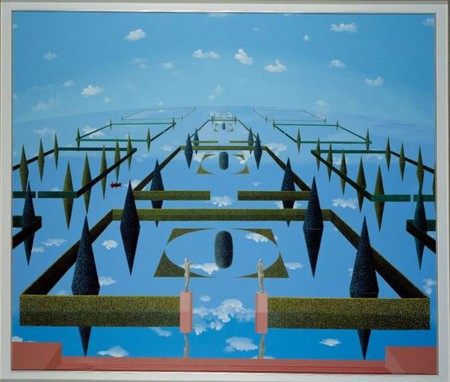 By 1978, Krašovec felt suffocated by the rules she had imposed on herself, and was deeply troubled and depressed. In a fortunate turn of events, she traveled to Mexico and fell in love with the Slovenian poet Tomaž Šalamun, who later became her husband. Her adventures in Mexico and her new state of happiness inspired a dramatic change in her work, and brought forth the body of work now known as her New Image period of the 1980s. Krašovec created a series of drawings with a playful and strange sense of humour, using felt-tip pen to depict naked men, women, and animals in unusual situations. Besides her drawings, her paintings of figures also had a relaxed, dreamy quality and free-flowing brushstrokes, in stark contrast with her structured paintings of the 1970s.

In the 1990s, Krašovec returned to a highly controlled style, but continued painting figures. In this period, her subjects were angelic women in tranquil settings. With their pale and radiating complexions and serene expressions, these figures are mysterious, surreal, and captivating. These paintings often show one or two nude women from the shoulders up, calmly staring into the distance or directly at the viewer. They appear to come from another world. By the late 1990s, though her Neoclassical style remained, her subject evolved into magical, imaginary landscapes. In depicting perfectly manicured greenery and still water mirroring clear blue skies, these landscapes seem to be secrets one discovers, not in real life, but in the mind. Krašovec continues to explore this terrain today.

Krašovec states that since the beginning of her work, there is an apparent duality in her. On the one hand, she needs to express herself through extreme precision, and on the other, through openness and joy. In examining the evolution of her work over the decades, from the severe red building facades to the unconstrained New Image drawings to the Neoclassical landscapes, it is clear that this is the consistent driving force behind her oeuvre. She quotes Matisse: “The artist has but one idea. He is born with it and spends a lifetime developing it and making it breathe.” For Krašovec, this idea is finding harmony in her duality.