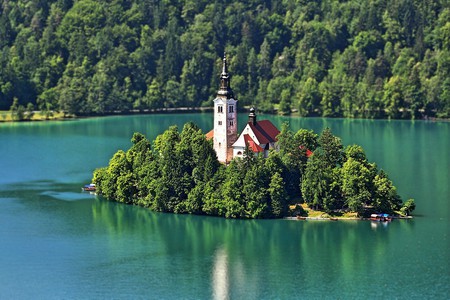 When visiting Slovenia, travelers are impressed by its vibrant history, beautiful nature, and rich culture. Many of the country’s castles and museums make visitors feel like they are traveling back in time. Slovenia’s pristine nature is full of mountains, rivers, and caves for visitors to discover. Here are the 15 must-see attractions when visiting Slovenia. 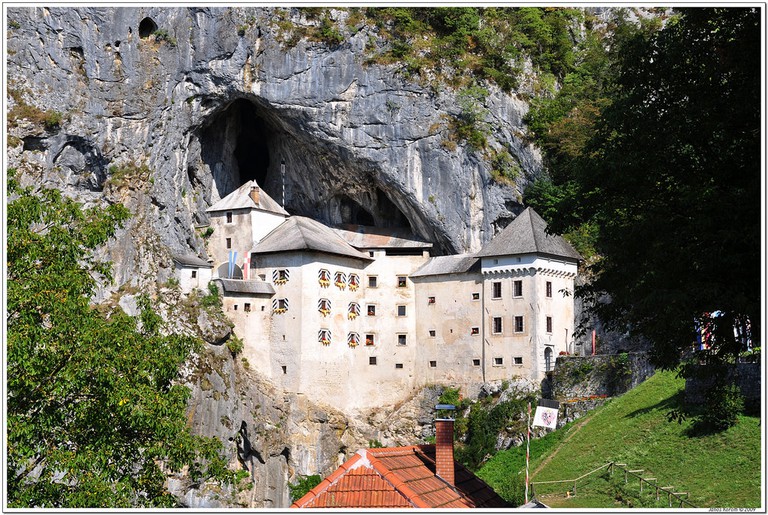 Predjama Castle│ | © János Korom Dr./Flickr
Predjama Castle is a magnificent Renaissance castle. What makes this castle unique is the fact that it is built inside a cave. The castle used to be home to Erazem Lueger, a knight, who was known as the local Robin Hood. Available audio tours reveal the exciting life of Lueger and the history of the Predjama Castle. Tours of a secret tunnel, which served as a supply route when the castle was under siege, are also available when scheduled in advance.
Open In Google Maps
1 Predjama, Postojna, Postojna, 6230, Slovenia
+38657000100
Visit Website
Give us feedback

Postojna Cave | © Michael R Perry/WikiCommons
The Slovenian underground hides thousands of caves. Among those, twenty-two are open to the public, and Postojna Cave is the most visited. A 90-minute guided tour takes visitors through caverns, halls, and passages that were carved by the Pivka River. Inside the cave, there are beautiful karst formations, some of which are millions of years old. Several times a year concert events are set inside the cave, and as a part of Postojna Cave’s Christmas traditions, a nativity scene with live actors is set in December.
Open In Google Maps
30 Jamska cesta, Postojna, Postojna, 6230, Slovenia
+38657000100
Visit Website
Give us feedback

Lake Bled is one of the most visited attractions in Slovenia. The beautiful views of the lake and the small island it surrounds brings thousands of visitors every year. The best way to reach the island is taking pletna, a traditional gondola in the Bled area. Once on the island, visitors must walk up ninety-nine steps to reach the island’s church. It is considered good luck to ring the church’s bell when visiting the island. 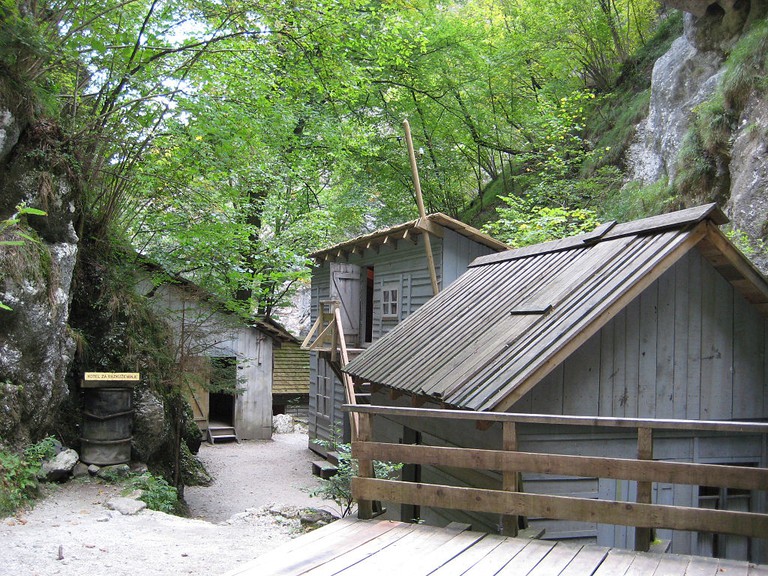 Renovated Franja Hospital | © Sl-Ziga /WikiCommons
Franja Hospital served as Partisan Hospital during World War II. Located in the Pasica gorge, it was hidden from the enemy and saved the lives of many men and women. After the war, Franja became a museum and was open to visitors until a devastating flood in 2007. Luckily, the hospital was reconstructed, and the new hospital is almost an exact replica of the old hospital. Now, the fourteen cabins that form Franja Partisan Hospital are once again open to visitors.
Open In Google Maps
Dolenji Novaki, Cerkno, Idrija, 5282, Slovenia
+38653723180
Visit Website
Give us feedback 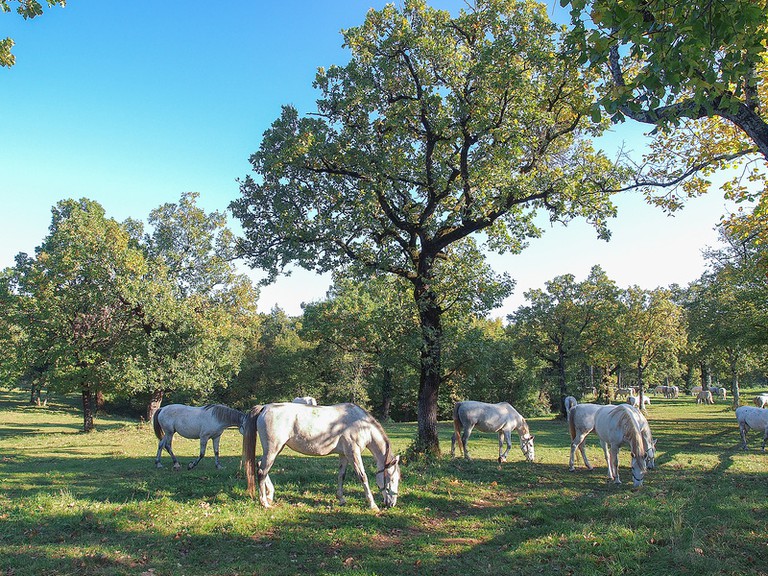 Lipica, Slovenia | © usto/Flickr
Lipica Stud Farm has been breeding Lipizzaner horses since the sixteenth century. Once used by royals for their private stables, the farm is now open to visitors and allows them to admire this beautiful breed of horse. When visiting the Lipica Stud Farm, guests can stroll through the barns and join one of the farm’s guided tours. Three times a week the Classical Riding School performs, and guests can see the Lipizzaner horses in action.
Open In Google Maps
5 Lipica, Sežana, Sežana, 6210, Slovenia
+38657391696
Visit Website
Give us feedback

The Triglav National Park, named after the country’s tallest mountain, is the only National Park in Slovenia. With beautiful views of the mountains, hills, lakes, rivers, and pastures, this park is a nature lover’s paradise. Aside from hiking, Triglav National Park offers great activities such as kayaking, rafting, skydiving, and parasailing. 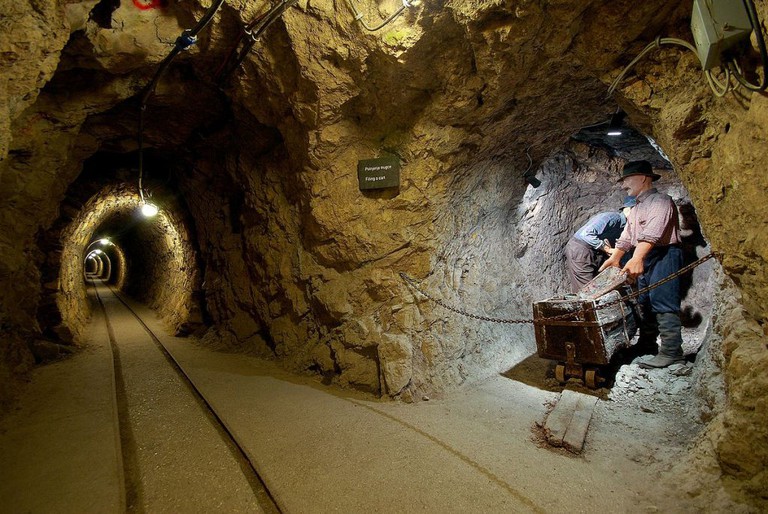 Anthony's Main Road | © Jani Peternelj/WikiCommons
When still operating, Mercury Mine in Idrija was the second largest mercury mine in the world. Now, it is an excellent museum that takes visitors underground and introduces them to the life of Slovenian miners. The entrance to the museum is through Anthony’s Main Road, which was built in the sixteenth century and is one of the oldest mine shaft entrances in Europe. The historical importance of the Mercury Mine in Idrija is the reason that the mine was added to the UNESCO World Heritage List in 2012.
Open In Google Maps
3 Kosovelova ulica, Idrija, Idrija, 5280, Slovenia
+38653771142
Visit Website
Give us feedback 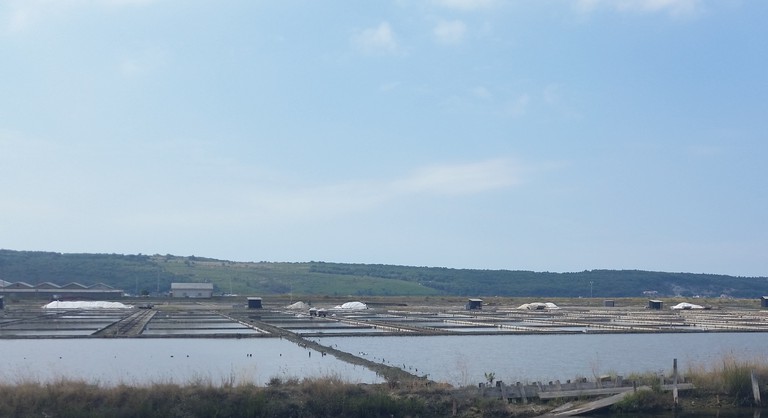 Salt Fields | ©Andreja Posedel
The Salt pans in the Sečovlje Salina Nature Park are one of the few places in the world where sea salt is still produced by using a centuries-old method. When walking on the park trails, visitors can observe salt being harvested manually by local workers. For those who wish to pamper themselves, Lepa Vida Thalasso Spa offers massages and baths where the healing powers of the sea salt are used.
Open In Google Maps
290 Parecag, Sečovlje - Sicciole, Piran, 6333, Slovenia
+38656721330
Visit Website
Give us feedback 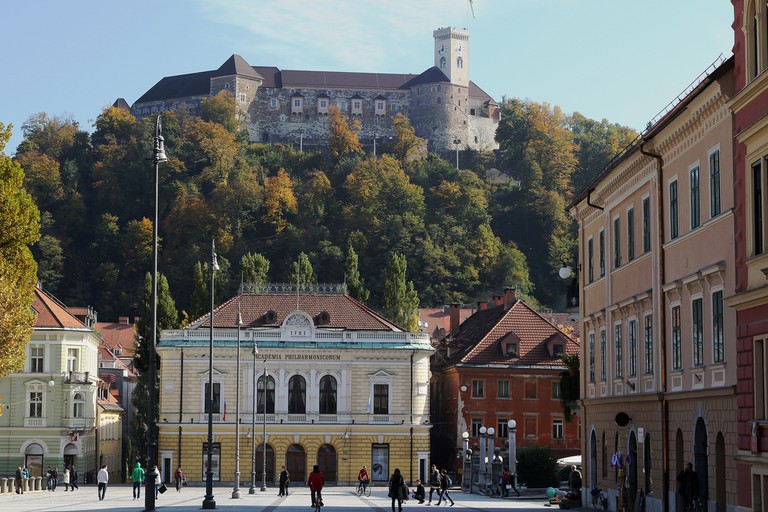 Ljubljana Castle | © Lorenzo Magnis/Flickr
Book Now
Ljubljana Castle offers the most beautiful views of Ljubljana. This sixteenth-century castle is easily accessible by foot or by taking a tram. On the top, the café and a restaurant in the castle’s courtyard are a perfect place to rest and enjoy a cup of coffee or taste traditional food. Ljubljana Castle also hosts several permanent exhibitions and offers guided tours.
Open In Google Maps
1 Grajska planota, Ljubljana, Ljubljana, 1000, Slovenia
+38613064293
Visit Website
Give us feedback

The Oldest Vine in the World 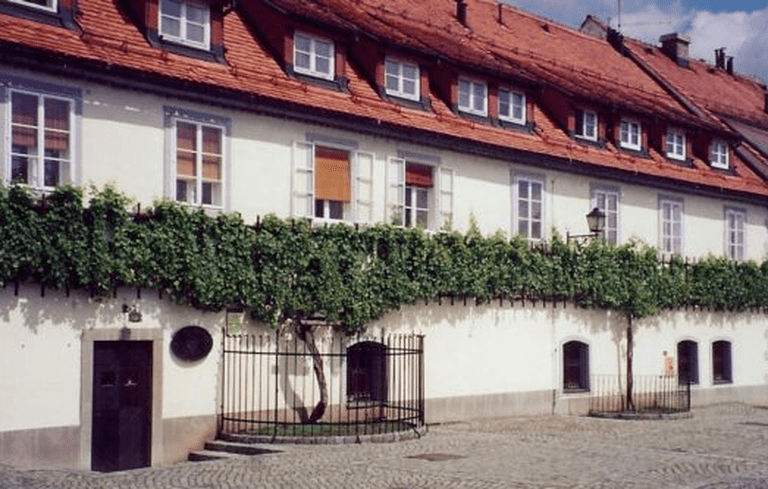 Oldest Vine│ | © Kay Adams/WikiCommons
In the Lent area of Maribor, Slovenia’s second-largest city grows the oldest grape-producing vine in the world. Records show that the vine has been growing on the façade of an old house since the seventeenth century. The house is now a visitor’s center where guests can taste the best wines of the Maribor region. In honor of the oldest vine, The Old Vine Festival is organized every year. The festival starts in September with picking the grapes off the vine, and it ends with a big celebration on St. Martin’s Day when the must turns into wine.
Open In Google Maps
8 Vojašniška ulica, Center Maribor, Upravna enota Maribor, 2000, Slovenia
+38622515100
Visit Website
Give us feedback

Church of the Holy Trinity 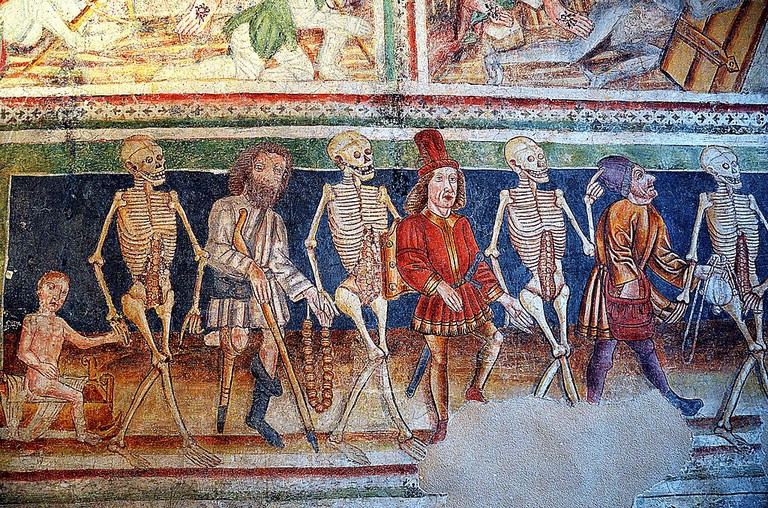 Dance of the Dead | © Ivo Frbezar/WikiCommons
The Romanesque-style Church of the Holy Trinity is located in a small village, Hrastovlje. It is most known for its seven-meter long fresco, The Dance of Death (Danse Mac). Until 1949, when discovered by Jože Pohlen, this magnificent piece of art was hidden under a thick layer of plaster. The Dance of Death portrays eleven skeletons leading eleven people (of different social status) to their grave, with the twelfth skeleton holding the coffin open for them. This art piece was created to remind people that we are all equal in God’s eyes.
Open In Google Maps
19a Hrastovlje, Črni Kal, Koper, 6275, Slovenia
+38631432231
Visit Website
Give us feedback 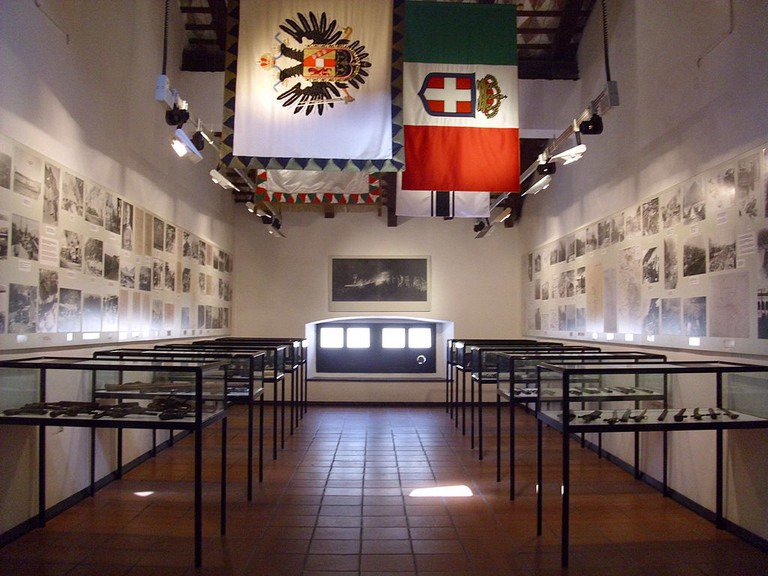 Kobarid Museum | © Lokiseinchef /WikiCommons
The Kobarid Museum was founded with the purpose of preserving, presenting, and researching the history of World War I in Slovenia. Most of the museum is dedicated to the Soča Front, the most important front on the Slovenian territory in the Great War. The rooms of the museum present visitors with photos documenting the horrors of the front, military charts, diaries and maps, and two large relief displays showing the front lines. Visitors can explore the museum on their own, or they can partake in one of the guided tours.
Open In Google Maps
10 Gregorčičeva ulica, Kobarid, Tolmin, 5222, Slovenia
+38653890000
Visit Website
Give us feedback

Stadium
Facebook
Email
Twitter
Pinterest
Copy link
Share
Map View
Planica is home to the biggest ski jumping hill in the world. For over twenty years it has hosted one of the most important ski jumping competitions in the world. In 2015 Planica received a much-needed update, and the new Planica Nordic Center was built. Aside from the ski jumps the center also features an athletics stadium, a zipline, a wind tunnel, cycling and walking paths, and a visitor’s center. Planica zipline has the steepest descent in the world, which creates the sensations that ski jumping champions feel when flying through the air.
Open In Google Maps
167 Rateče, Rateče Planica, Jesenice, 4283, Slovenia
+38631689806
Visit Website
Give us feedback 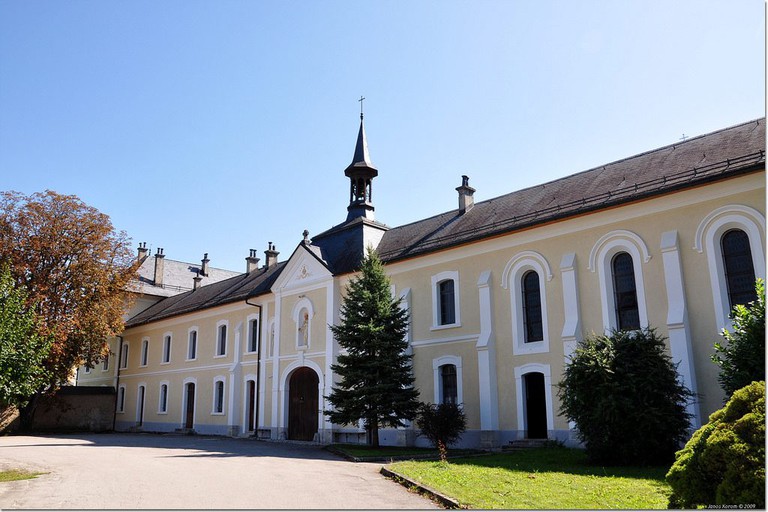 Stična Monastery | © János Korom Dr./Flickr
Stična Abbey, built in 1136, is home to the oldest monastery in Slovenia. This monastery houses the Slovenian Museum of Religion, which presents the Stična Monastery’s history and the history of the Roman Catholic religion in Slovenia. The monks at Stična Abbey are excellent tea-makers, and because of this, the monastery houses a little tearoom, where visitors can try and buy tea.
Open In Google Maps
17 Stična, Ivančna Gorica, Grosuplje, 1295, Slovenia
+38617877100
Visit Website
Give us feedback 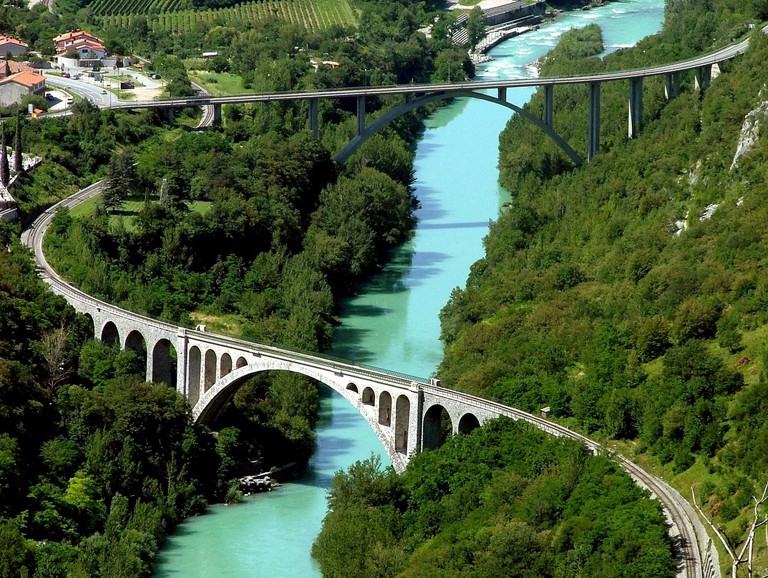 Solkan Bridge | © Branko Borjaški /WikiCommons
The Solkan Bridge, located near Nova Gorica, is a great place to view the turquoise Soča River and the beautiful Soča Valley. The bridge also holds the world record for the longest train bridge built solely out of stone. For the truly adventurous, bungee jumping off the bridge is the most unique way to admire the beauty of the Soča Valley.
Open In Google Maps
Solkan, Nova Gorica, 5250, Slovenia
+38653304600
Visit Website
Give us feedback
Give us feedback