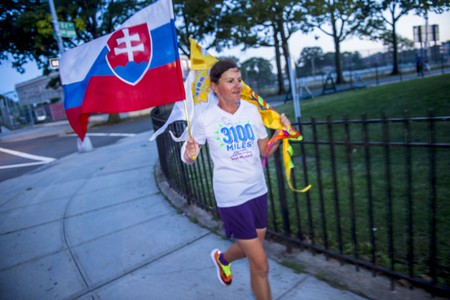 The annual Self Transcendence 3,100 mile (4,988 kilometre) race is considered to be the most challenging running race in the world. The New York course is certified as the longest footrace and has been labeled the “The Mount Everest of ultramarathons” by The New York Times. Just finishing the race within the time limit of 52 days requires runners to log an average of 59.6 miles per day. This year, Kaneenika Janakova of Slovakia completed the race in 48 days, 14 hours, 24 minutes and 10 seconds, thus beating the world record by more than 17 hours.

Racing as a spiritual practice

Janakova decided to compete in the event after many years of running multi day races. She jokes that she was trying to avoid the 3,100 mile distance for quite some time, but finally the urge to conquer the ultimate endurance test compelled her to begin training for the Self-Transcendence run. “I take running and competing in these races as a part of my spiritual practice. For me it’s a continuous journey that helps me to become a better person and to inspire other people,” Janakova explains.

Janakova says that the first time she competed in the Self-Transcendence run, she realized how much power she had to inspire others. “In my first attempt in this race I didn’t complete the distance of 3100 miles due to an injury after a fall. It was very tough for me not only physically but I think even more mentally and I had moments when I wanted to pull out of the race.” However, she continued and managed to complete 3,014 miles. “I was very happy and grateful I didn’t give up. Many of my friends but also people I didn’t know were telling me personally or in emails, how much inspiration they got from my efforts,” recalls Janakova. She says this experience helped her to realize that she does not run only for herself, but also to be a positive role model for others. 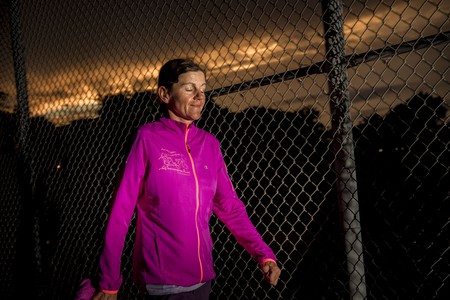 Remembering the reasons behind her running was crucial to Janakovas success during the grueling race schedule. “I woke up 5:15 every morning. The race started at six am sharply. Around 11 o’clock I took my first break. During all of my breaks I would check my feet for blisters and take care of them. If it was needed I would get a massage and then take a 15 min nap. My next break was around 3 pm. And the last one was at 7 pm. So three breaks in total between 20-30 min,” Janakova explains. On most days, she would continue running until midnight when the course shut down, averaging 102 kilometers per day. She would only get around four and a half hours of sleep before repeating this exhausting process daily for 48 days.

Mental toughness is extremely important in multi day races. Runners have to be able to remain focused for a long period of time. “As much as the the physical preparation is important, for me it is equally important to devote time to practice meditation. Meditation helps me tremendously to calm and control my mind and also helps me to be more aware of my abilities and believe in my true potential coming from inside. Running and meditation complement each other in my life,” says Janakova. 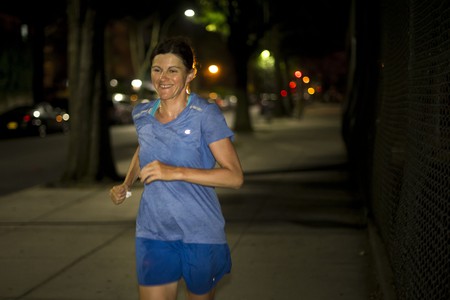 Meditation and running; an inseparable pair

Meditation is a skill she learned during her late twenties, when she was searching for something more meaningful in her life. She came across Sri Chinmoy, who is a master of meditation, as well as an accomplished author, musician, artist, peace advocate, and athlete. “He believed that human capacity is unlimited, we just have to try and persist. So when I started meditating, I also started running. Of course I started with shorter distances and I never thought I would get into competitive running,” says Janakova. After running her first marathon in 1996 with a time of four hours and 46 minutes, she felt incredibly happy as satisfied by achieving something which she hadn’t even dreamed of before.

Since 1996, Janakova has been hooked on both meditation and running. She began training for the Self-Transcendence run about a half year before the starting date, in February 2017. When she started the race, she had accumulated hours of physical preparation during long runs and Pilates, yoga, and strength training. Yet, “It can be very challenging to control the mind and the thoughts during this race. What I do not want to think about is the distance and the number of days or weeks I have to spend on the course. If I do that it gets very hard because all my mind wants to do is to find the reasons why I should not be doing this race. In order to avoid this I have to trick my mind,” explains Janakova.

She tricks her mind by focusing on just one lap at a time, or by spending time with other runners or friends as she runs. “An even better way is to try to quiet the mind and go inside the heart. The heart doesn’t calculate or plan anything. It is just full of joy and eagerness,” relates Janakova.

Janakova’s training and mental toughness really paid off for her in New York this year. She overcame the challenges of the 3,100 mile distance and emerged as a new world record holder. “But for me it’s not about winning or setting any records. For me what is important is to give all I can give and be best I can be. And to be happy with the outcome. That’s the main reason I enter these races. Each race is very special for me, it is a continuous journey to make progress and become a better person,” says Janakova.

You pine to satisfy and fulfill all.

By virtue of your sleepless self-offering

Smiling you forget others’ teeming faults and blunders.

In your heart-sky you sing only

This song is special to Janakova, as it was composed by Sri Chinmoy during his visit to Slovakia in March 1999