Top 10 Things To Do and See in Trnava

The charming city of Trnava, less than 50 kilometers north-east of Bratislava, has been been part of many countries over the centuries. So it is no surprise that the historic center is chock full of impressive architecture in varying styles. It’s particularly famous for having many churches, earning it the nickname ‘Little Rome’. Here’s our selection of the top things to see and do there.

The City Tower, built in 1574, is the highest building in the historic center and has an incredible view over Trnava. It’s only 57 meters high and the observation gallery is at 29 meters, which compared to other similar structures in Europe, might seem disappointing. However, given how small the buildings are in the city, the views are surprisingly good. The tower also boasts some 17th-century bells, ringing twice an hour, and the city’s only sundial.

The Saint Nicholas Basilica is one of the oldest churches in Trnava. Dedicated to the patron saint of merchants, it was built in Gothic style from 1380 to the middle of the 15th century but a Baroque chapel was added in the 18th century. Inside this more recent addition, visitors can admire a replica of the painting of the Virgin Mary exhibited in the Santi Bonefacio e Alessio Basilica in Rome, adding even more credence to Trnava’s reputation as the ‘Little Rome’.

Walk along the river and the city wall

What remains of Trnava’s 13th-century city wall is remarkably well-preserved and walking alongside it is a lovely way to have a look at the medieval parts of the city. There’s a paved path between the largest remaining portion of the wall and the Travka river that is popular with locals but not too crowded. Along the way there are a few monuments, for example to one Anton Bernolák, the first person to come up with a standard Slovak language. 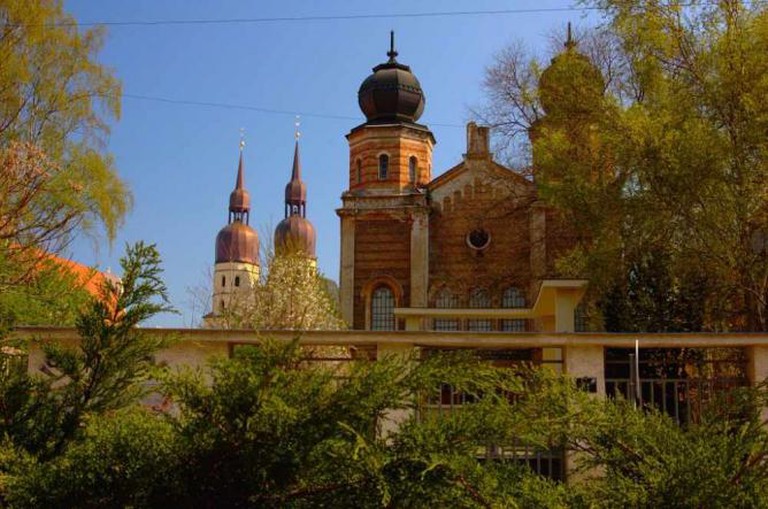 Synagogue in Trnava | © Doronenko/Wikicommons
Trnava might be known for its churches, but the most unique sight in the city is probably the synagogue on Halenárska Street in the very heart of the historic center. Not to be confused with the old synagogue-turned-café on the next street, this establishment looks very out of place in the typical Central European Trnava since it was built in Moorish-Byzantine style, giving it a Middle Eastern flavor that contrasts sharply with the surrounding Gothic and Baroque architecture. It’s no longer active and now houses art galleries, one of which we’ll come back to later in this list.
Open In Google Maps
2 Halenárska, Trnava Trnavský kraj, 917 01, Slovakia
+421335514657
Visit Website
Give us feedback

There are plenty of spots in Trnava’s historic center that are not famous for anything in particular but are simply a pleasure to walk around. On our list, then, is this: walk around the center, admiring the beautiful Baroque and Rococo façades that the area is rife with. Good examples of such architecture are found, for example, on Štefánikova Street or Hlavná Street, not far from the Saint Nicholas Basilica. A few of the nine university buildings were also built during the Baroque era but, unfortunately, for the most part there is nothing left of the original buildings except the porches. 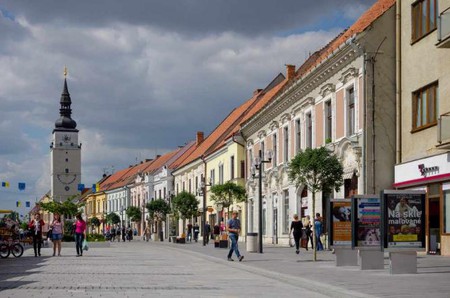 Hungarian wine is increasingly popular but few people know that Slovakia has quite a good production as well. Those who do know about it usually limit themselves to Tokaj, the renowned wine from southeastern Slovakia, but that’s not all there is. Don’t hesitate to order local wine at the restaurant, or pick up a bottle in the supermarket. For a real ‘wine tour’, head to the Mrva & Stanko winery, where visitors can not only try excellent wines but also take a complete tour of the domaine, highlighting the steps of the winemaking process along the way. Finally, once a year, all the unique underground wine cellars under Trnava are open to the public: in 2016, it’ll be on November 5th.

This Roman Catholic cathedral, with its single nave and two towers, is Trnava’s most emblematic and most beautiful building. Built in 1637, it was the first completely Baroque building in the whole of Slovakia. The interior is typically Baroque: full of gold and colorful paintings, contrasting with the bright white walls. The immense 17th-century wooden altar, one of the biggest of its kind in Europe, is another impressive element. The cathedral used to be part of the university but since 1977 it is the cathedral of the Bratislava and Trnava diocese. It’s an unmissable stop for any visitor.

The synagogue is a beautiful building to look at but it’s also worth going inside! There, visitors will find a cutting-edge contemporary art space, the Jan Koniarek Gallery. The gallery is a non-profit organization focusing on 20th century art and current trends in modern art. Both Slovak and foreign works of art are featured in two exhibition spaces, one of them the Synagogue. The other is the Koppel Villa, at the edge of the historical center.

Wine is great but why not try local beer too? Beer has been produced and drunk in Slovakia at least since the 15th century so it’s no wonder the country has a rich beer culture, comparable to that of the Czech Republic. Lager is the most common. Trnava, despite its small size, does have its own brewery: Sessler. It is easy to find in bars throughout the city but to get the freshest pint, head to the brewery’s restaurant—also a good excuse to get out of the historic center and explore the rest of Trnava. The beer is not to everyone’s taste but it’s an authentic Trnava experience.

Trnava is a rather small city and from here it’s easy to get to the countryside. Trnava is the capital of the Trnava region, which has plenty of mountains, valleys, small villages, and lakes. Furthermore, the convenient location and climate make it possible to find many interesting species of plants and animals in the city itself, notably in usually unvisited or even abandoned areas, like railway embankments, for example. There are 342 different species of plants just on the city’s territory, including six endangered ones.