The Rise of Far-Right Politics in Slovakia 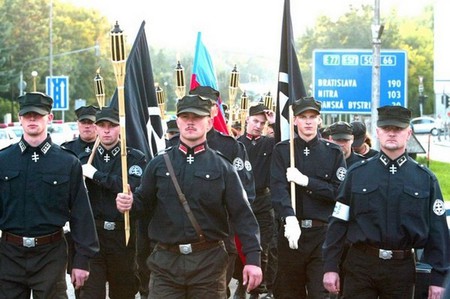 LSNS has been gaining support from young voters for several years now. The party’s real entry into the spotlight occurred when leader Marian Kotleba was elected mayor of the Banska Bystrica region in 2013. Since then, Kotleba has served as a public figurehead and has gained a lot of public attention for the party’s extremist views.

Many Slovak political analysts and news publications point to social media as the primary reason for LSNS’s success amongst young people. According to data reported by Radio Expres and the Slovak Spectator, exit polls from the recent March 2016 parliament election revealed that almost 23 percent of first-time voters chose to vote for LSNS.

What does the LSNS stand for?

LSNS is known for anti-European Union sentiments, reminiscing about Nazi occupation, and racism against the Roma community, Muslims, and other minorities. Their views are radical, and these extreme ideas draw young people who are looking for a change to vote for LSNS candidates. The trouble happens when the LSNS take their far-right idealism too far; in April 2016, the party launched “train patrols” to maintain public order and monitor the behavior of Roma passengers. The “train patrols” began as a response to a robbing of a 21-year old girl in April, but were banned by parliament in October 2016. Parliament ruled that only police could perform the roles of the police, but vigilante patrols continued for several months.

LSNS has a strong anti-Roma rhetoric written into its official Ten Commandments and is open about their opinion regarding the existence of gypsy people in Slovakia. “‘We will put a stop to the preferential treatment of all social parasites, including gypsy parasites. Parasites who will refuse to work, will receive nothing for free – no housing or other benefits and allowances,’ reads the official Ten Commandments of the Party. “The age for criminal responsibility shall be reduced to 12 years and the criminal and penitentiary system will be adjusted so that everyone, including politicians and social parasites, will think twice whether they would prefer honest work or stealing and plundering,” it goes on to elaborate.

How have the LSNS gained supporters?

Several countries are monitoring the heated political climate in Slovakia and making efforts to educate young first-time voters. In March 2017, The United States Ambassador Adam Sterling traveled to Velky Krtis in southern Banska Bystrica province to speak to 60 high school students about his personal encounters with intolerance and antisemitism. A primary focus of his speech stressed the importance of Roma integration efforts.

Christian Picciolini, author of Romantic Violence; Memoirs of an American Skinhead has visited Slovakia three times in the past year to speak to young people about his experience as a young leader of a violent far-right hate movement. Picciolini left the movement at age 22 and is now an author, producer, public speaker, activist, and co-founder of Life After Hate, a nonprofit organisation helping people disengage from hate and violent extremism. Picciolini says he is concerned about the rise in ultranationalist, xenophobia, and NeoNazism in Slovakia because he believes it is “fed by rhetoric coming from people with loud voices and impure agendas, driven by fear, isolation, and false propaganda.”

LSNS false propoganda often blames the Roma community or immigrants for the country’s problems, instead of focusing on issues like education. “I fear for the many “average” citizens that have a genuine grievance, but are fooled by the language coming from the leaders that is consistently blaming the “other” for their problems. There are people everywhere suffering, unemployed, and living in poverty. It’s relatively easy for savvy leaders to blame those problems on refugees, immigrants, or people of color and hide their hatred behind patriotism,” explains Piccolini.

In Slovakia, social aid programs often provide for Roma families who have several children, paying out several hundred more euros than the minimum wage. This leads to many working-class citizens feeling cheated. These citizens see LSNS as the answer to minimizing the amount of aid gypsy families receive. Kotleba also presents himself as a defender of traditional family values and a fighter against corruption at all levels. It’s common practice in Slovakia for money to create a smooth passageway for the upper class throughout their life; from bribing teachers for good grades to bribing the police if caught wrongdoing. In fact, corruption in Slovakia is such a large problem that in the World Economic Forum’s 2016-2017 corruption index, Slovakia ranked as the second most corrupt country in Europe. People who are fed up with corruption on a large scale see LSNS as the answer to this problem.

LSNS advertising and posts from party leaders shows up daily on the social media feeds of young people in Slovakia. Politicians know that first-time voters spend several hours every day on Facebook and Instagram, so they are often very active in the online space. “Nowadays, the Internet is the most powerful tool and influencer of people, so of course extremists have also adopted it to spread their false narratives, conspiracy theories, and fake news. The Internet also allows marginalized people to invent an identity, find a community, and have their life’s purpose hijacked by people with large egos and agendas” says Picciolini.

In order to understand the messages Slovakia’s youth are receiving from the LSNS and party leader Marian Kotleba online, a quick scroll through Instagram can give you a good idea.

In this post, Kotleba presents himself as an umbrella, sheltering Slovakia from immigrants, refugees, the LGBT community, and the European Union. “Uncompromising program, open and striking rhetoric and the fight against parasites and thieves in Parliament and among people is the reason why we are being continuously attacked by foreign media and persecuted by the government and its police machinery,” says the LSNS Party website.

In this post, Kotleba presents the symbol of the European Union on toilet paper. He advocates that Slovakia should leave the EU.

This post also mocks the EU and encourages Slovakia to follow in the footsteps of the UK in leaving the EU.

Fico is a Slovak politician who previously served as the Prime Minister of Slovakia, in this post Kotleba questions who is the more socialist – Fico or Hitler?

What’s the solution to far-right extremism?

The political future of the country is uncertain amidst arguments between the far-right and the leftist Smer (sociálna demokracia) party, led by Robert Fico. Political party arguments aside, in May 2017 General Prosecutor Jaromír Čižnár filed a motion to Slovakia’s Supreme Court to ban the LSNS party. This would be the first time that a party currently sitting in Parliament might be banned in Slovakia. The Prosecutor will attempt to demonstrate that the party’s conduct and statements are violations of Slovak law. If successful, the party could be banned as soon as August 2017. If this happens, the 14 party members with seats in Parliament will retain their seats, but will lose their caucus, and thus lose about €2.1 million in state funding.

Even if the party is banned, the leaders could potentially form another far-right group. The same frustrations and grievances which caused the LSNS to be elected would not simply disappear. Young Slovak citizens are interested in seeing a change in the way things have been done, and looking for someone who promises to lead that change. Ideally, the change will not be violent and will not lead to the further marginalization of about 10% of the country’s population which is categorized as being “other”. During Picciolini’s three visits to Slovakia, he reports a positive response from the high school students he has spoken to about his story and the dangers of continuing to live a life filled with hate for others who are different. “I have also worked with some local partners to help develop Exit Slovensko, an exit program for those we help disengage from hate. So far, the response has been tremendous to my talks and workshops and Exit Slovensko is off to a fast start,” he reports.

While the rise in Neo-Nazi political ideals in Slovakia is certainly concerning, there is still hope that the movement will be stalled in its early stages, allowing the country to continue working towards increasing tolerance, improvements in education, and preserving its relationship as a partner in the European Union. And just as there are messages of hate on Kotleba’s instagram feed, Picciolini has started his own hashtag directed against reducing hate, increasing tolerance, and giving back to your community #makegoodhappen.

The #makegoodhappen hashtag is a way to show support for Picciolini’s mission to end hatred and extremism.