The 10 Best Restaurants in Bratislava 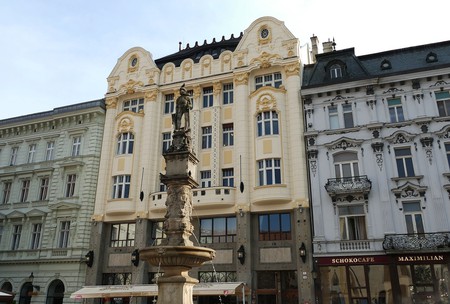 While in Bratislava, sampling traditional Slovak dishes like bryndza halusky, goulash soup, and stuffed pirohy (pierogi) is a must. But thanks to the influx of international residents in Slovakia’s capital city during the past few years, you can also enjoy outstanding cuisine from all over the world. Bratislava boasts an amazing Thai food restaurant, a French bistro, and a gourmet burger and craft beer place. Here’s where to head if you get hungry while sightseeing in Bratislava.

Gastropub, Restaurant, Pub, Contemporary, European, $$$
Facebook
Email
Twitter
Pinterest
Copy link
Share
Map View
Fabrika Beer Pub serves some of the very best burgers in Bratislava, with mouthwatering topping choices. Order the cheeseburger and enjoy a beef burger with smoked Slovak cheese, tomato salsa, red chard salad, red onion, aioli and egg, served with seasoned fries. Or if you like spicy foods, the Mexican burger is topped with jalepeno peppers. Fabrika also brew their own craft beers in small batches on site. The Fabrika F 12° Lager is a light, Pilsner-type lager with rich foam, perfect to accompany your burger. If you would prefer to try something more typical to Slovakia, you can order the beef goulash, cooked in beer, or the pork tenderloin schnitzel with mayonaise salad.

This small, quaint, romantic Slovak restaurant in the Old Town is the perfect place to take a date in Bratislava. A cosy interior with a wooden beamed ceiling, shelves filled with ceramic pots, and walls lined with old paintings create a welcoming atmosphere. Once seated, you will have to make a decision between ordering roasted special pork Mangalica with chestnuts and pumpkin puree or a rabbit leg in red wine sauce with forest mushrooms and a potato herb dumpling. There are many other outstanding meat-based options on the menu, including lamb, wild boar, pork, chicken, and beef steak. There is also a baked zucchini with cheese dish for vegetarians and baked trout or grilled zander for those who prefer fish. You will want to come hungry and leave room for homemade poppy seed dumplings, a Slovak specialty.

The flavors and beautiful presentation of the food you will enjoy at the Green Buddha restaurant are sure to linger in your mind for weeks after your vacation. The menu has a clearly marked pepper rating system to warn you about the spiciness level of the dishes you are considering ordering. If you like spicy food, you won’t be disappointed. If heat isn’t your thing, then you might want to skip one of the coconut milk based curries and opt for pad thai or fried rice with chicken, prawns, or vegetables. The menu is varied enough to offer something for everyone, and vegetarians highly recommend the Green Buddha for its clearly marked vegetarian options which are anything but boring. It’s a good idea to change from your old jeans and sweatshirt into a dress or slacks and a button up before enjoying your evening in this trendy bistro.

Restaurant, European, Austrian, Hungarian, $$$
Facebook
Email
Twitter
Pinterest
Copy link
Share
Map View
Zylinder evokes the memories of Bratislava about 100 years ago, when it was called Pressburg, and was considered a suburb of Vienna, a part of the Austro-Hungarian Empire. The logo of the restaurant feautures an old fasioned top hat, and as soon as you step inside, you will feel as though you have stepped into a space which is frozen in time. The friendly waitstaff are sure to give you a warm welcome, and to explain some of the restaurants unique regional specialities. Many people go to Zylinder for their excellend tafelspitz, a Viennese delicacy involving a piece of rump beer boiled in a simple broth with root vegetables, apple horseradish, spinach, and potatoes. You will also find other regional specialities such as schnitzel, pork knuckles, duck confit, goulash, and stuffed peppers on the menu. If you would like to try local specialites in a quintessential Pressburg, circa 1900 atmosphere, Zylinder is the place to do so.
https://www.instagram.com/p/BAZYAdfCAus/?hl=en&taken-at=240173958
Open In Google Maps
19 Hviezdoslavovo námestie, Staré Mesto Bratislava, Bratislavský kraj, 811 02, Slovakia
+421903123134
Visit Website
Visit Facebook page
Give us feedback

For a casual dining experience al fresco, head to Orbis Street Food, where you can order your meal and carry it with you on a two minute stroll to Old Town’s main square or to a bench in front of the gorgeous Primatial Palace. Then, find a bench and enjoy a meal with a view. Whether you order a burrito, meat in a cone, or a Thai wrap, make sure to get a side of Belgian fries. The fries at Orbis are prepared from large sized potatoes and friend twice with beef grease. They are then served in a cone for easy carrying along with your choice of a dipping sauce. Orbis Street Food is the perfect restaurant for travelers on a budget who would still like to enjoy good quality food in a beautiful location at an affordable price.

Restaurant, European, $$$
Facebook
Email
Twitter
Pinterest
Copy link
Share
Map View
Zelený Rodrigéz serves up all of the best Slovak traditional dishes at a fair price. The atmosphere isn’t anything special, but what the restaurant lacks in charm, it makes up for with its amazing local dishes. Don’t miss the potato pancake, stuffed with beef and peppers. And make sure to start your meal with one of their appetizing soups, just as Slovaks traditionally start every meal. Sip Slovak wine and finish your meal with somlói galuska, a Hungarian inspired dessert cake soaked in rum and topped with chocolate sauce.
https://www.instagram.com/p/BRMOsd0gEvb/?hl=en&taken-at=281490277
Open In Google Maps
36 Zámocká, Hrad, Staré Mesto Bratislava, Bratislavský kraj, 811 01, Slovakia
+421905218569
Visit Website
Visit Facebook page
Give us feedback

If enjoying a fantastic view while you eat is important to you, Restaurant Parlament proudly offers a panoramic view over Bratislava from the castle hill. Located just under the castle, near the entrance to the Baroque gardens, you will find this upscale restaurant serving Slovak and Mediterranean inspired dishes. Parlament is frequently booked as a venue for special events, including wedding receptions, so make sure to call or email ahead of time to make a reservation. If you are lucky enough to visit during a weekday at lunch, take advantage of the weekday lunch specials, starting at only five euros.

The comfy armchairs and wall full of books invites you to linger over a coffee or homemade lemonade in Bistro St. Germain for hours. The food is casual fare which ranges from quiches to burgers to salads to hummus plates to wraps. The circular potato fries compliment any of the sandwiches nicely, but the real standout at St. Germain is their delicious desserts, particularly the cheesecake; chestnut cheesecake, caramel and chocolate cheesecake, brownie cheesecake, strawberry cheesecake. They also offer raw cakes and other seasonally inspired desserts.

Soup is a staple of the Slovak diet, and traditionally all meals in Slovakia begin with soup. Soupa Bistro makes it easy for visitors to fall in love with their tasty soups such as creamy spinach, Italian tomato, or hot and sour soup. The soups on offer change daily according to the which vegetables are in season and the chef’s creativity. You’ll be able to choose from at least four soups, then select a main dish to follow. Main dishes also change daily, but always include at least one vegetarian option, as well as creative carbs such as quinoa, couscous, and bulgur. For early birds, there is always a delicious breakfast on offer as well.

This is one of the more posh restaurants in Bratislava, but prices are fair with most main courses ranging from 25 to 30 euros. If you feel like spoiling yourself, splurge on the 50 euro tasting menu, which includes marinated rainbow trout, foie gras, pike perch with creamy sweet potatos, venison, and blueberry and almond pound cake with chocolate and yogurt foam. If you book a room in the adjoining B&B, you wont have to walk far afterwards. You can also book packages at the B&B which include meals in the restaurant. Both the guest rooms and the restaurant are located in a beautiful historic building overlooking the Danube River, a bit outside of the Old Town, but still easily accessible.