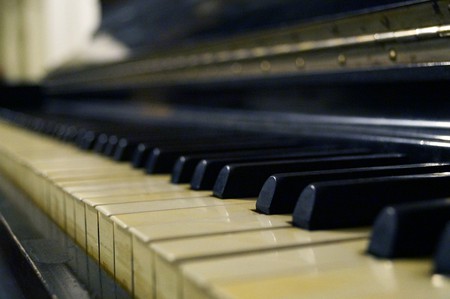 Annually in October, the Bratislava Jazz Days draws in outstanding international talent to two stages during a full weekend of live jazz performances. This year, the event will be held from October 20 to 22, with headliners including visiting American jazz groups Roy Hargrove Quintet, Blood, Sweat, and Tears, and Cory Henry & the Funky Apostles. Slovak jazz musicians will also take the stage, including Ľudové Mladistvá and Eugen Vizvary. If you love jazz, you will want to head to Bratislava this October; here’s what to expect from the two Slovak groups and the three headliners featured during this year’s Jazz Days!

Translated, the name of this group is “The Folk Young.”” The nine young folks who make up this band are led by group leader, Martin Majl Stefanik. The group aims to bring fresh sounds to the jazz scene by blending elements of Slovak folk music with jazz, including fusing more serious ballads with modern sounds. Stefanik is gaining attention as an emerging jazz artist; he won the Young Talent Stage at the 2016 Bratislava Jazz Days and Ľudové Mladistvá were awarded the New Faces of Slovak Jazz in 2016.

Stefanik is just 23 and thus as the beginning of a very promising career. His unique compositions and style bring a fresh approach to traditional renditions of Slovak folk songs, making them more accessible to younger generations. Already in 2017, the group won the international JazzFruit competition in Prague. Below is a preview of the uniquely Slovak sounds you’ll hear if you travel to enjoy Ľudové Mladistvá perform in Bratislava this October.

Eugen Vizvary has made one previous appearance at Bratislava Jazz Days, that was in 2015 as a member of the band Juraj Griglak with American drummer Poogie Bella. He was born in Bratislava in 1977 and raised in an artistic family. Vizvary plays the piano, bass, and drums with skill; in addition to that, he also sings. After spending several years working as a piano player at the Hilton in Vienna and as a member of a Jazz Trio on various ships with AIDA cruises, Vizvary released “For Jaco”, considered to be one of the very best Slovak jazz albums of 2016.

He is currently one of the most requested pianists in Slovakia, having worked with many famous Slovak singers during their concerts and tours. Most notably, he has worked with Karel Gott, a popular Czech singer who released the popular album The Golden Voice of Prague. He has also cooperated with Kim Davis, who works with international starts Alicia Keys and Whitney Houston. For a short sample of his upbeat jazz ensembles, check out the short video demo from his “For Jaco” album, then head to Jazz Days to hear the full versions!

Roy Hargrove is an American jazz trumpeter who has won two Grammy awards, in 1997 and 2002. He is famous for adding a signature touch of funk and soul to his jazz compilations. Prepare for some strong and moving sounds from the Roy Hargrove Quintet on Friday night in Bratislava.

Blood, Sweat, and Tears is a contemporary jazz-rock American group who combine brass jazz sounds with rock elements to produce their signature “jazz-rock”; a fusion of rock, blues, pop music, horn arrangements and jazz improvisation. Originally formed in 1967 in New York City, the band has gone through numerous arrangements of members and experimented with a wide range of styles. This is the most legendary band that will play at this year’s Bratislava Jazz Days, earning them the headliner slot on Saturday evening.