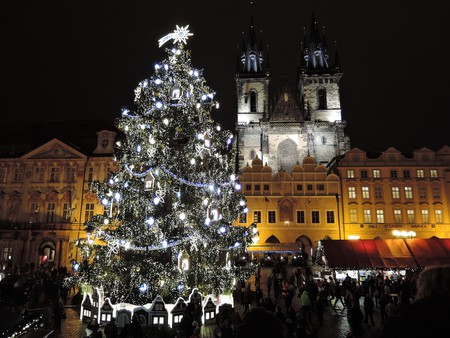 In the Czech Republic, carp is just as important as Christmas markets when it comes to holiday traditions | © maatcheck / Pixabay

In Eastern Europe, the traditional Christmas dish is not turkey or duck; instead taking center stage on most Christmas Eve dinner tables is an oily freshwater fish: carp. The carp typically arrives at the table after having spent two to three days in the family bath tub. Read on to discover the reasons and rituals of this holiday tradition.

Swimming in the tub

Carp are bottom feeders, so spending a few days in clean water is supposed to make the fish taste more fresh. However, most people aren’t thinking of these logistics when they plop their fish into the tub – they do so in order to uphold old traditions. Children have fun playing with the fish, and the anticipation for Christmas builds as the fish swims around in circles. If families need to use the tub, they simply move the carp into a bucket, bathe, then move the fish back in!

History of fish at Christmas

Strong Catholic traditions in Eastern European countries brought about the carp tradition hundreds of years ago. “Fish became popular for Christmas Eve dinner during the 13th century, because Catholics considered fish as a fasting food, and Christmas Eve was the last day of the Advent fast,” explains Jozefina Babicova, an English teacher in the Podpolanie region of central Slovakia, an area where Slovak traditions are celebrated and maintained. “The history of eating fish on Christmas Eve (or as many Slovaks say, ‘Generous Day’ – Štedrý deň) is entirely due to the fact that Catholics couldn’t eat meat during the fast,” Babicova elaborates.

So, due to the medieval pope’s decision that fish isn’t meat, Catholic people began eating carp every year for Christmas Eve dinner. If you find yourself walking around the city center of Prague on December 22 or 23, don’t be surprised to see several vendor stalls set up selling carp in transparent bags to families who take it home to put into the tub. However, many families today don’t wish to keep the carp in the bathtub for days, so they elect to buy a dead carp from the stalls instead and place it in the freezer or the fridge for a day or two instead of the tub.

Countries that celebrate with carp

Slovakia, Poland, and the Czech Republic are the main carp eaters at Christmas time. But there are also many families in Austria, Germany, and Croatia who celebrate Christmas with carp. It likely helps that the Czech Republic and Slovakia have an abundance of carp, which they harvest in fresh water ponds and export all over Europe. According to the Food and Agriculture Organization of the United Nations (FAO), in the Czech Republic, “Carp is the dominant fish species accounting for almost 90 percent of total aquaculture production,” according to data published in the National Aquaculture Sector Overview. And in Slovakia, the fish is also extremely popular, thus “Pond culture of common carp is the traditional and most common form of aquaculture in the Slovak Republic,” according to the FAO.

Typically, the carp is served freshly breaded and fried. Almost every country first serves a hearty soup as an appetizer before bringing out the carp. Polish families enjoy mushroom soup. In Slovakia, thick cabbage soup is served. Czech families also enjoy cabbage soup, but some Czech families prefer serving a fish soup instead. Traditional side dishes to accompany the fish include potato salad in Slovakia and the Czech Republic, pierogis in Poland, and freshly baked bread and salad in Croatia. Dessert is often vanilla and poppy seed cookies, honey and spice cookies, or rich strudels with walnuts.

In Slovakia, everyone wishes each other a Veselé Vianoce, or Merry Christmas, over a shot of strong locally produced liquor at the end of the meal.