A Brief History of Bryndza Cheese 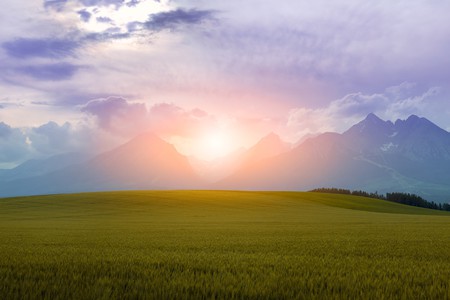 Slovakia's open pastures are home to many sheep, essential to the production of bryndza cheese | © Jeshoots/Pixabay

If there is one food you really can’t miss while visiting Slovakia, it is bryndza cheese. The cheese is a key ingredient in Slovakia’s national dish, bryndzove halusky. It is also used on top of toast, on salads, and with scrambled eggs. Slovaks use bryndza in all sorts of dishes to add flavor. Here, we present everything you need to know about this unique cheese.

“Traditional bryndza is sharp, salty, grayish, grated and pin-rolled, crumbly, semi-spreadable 100% sheep cheese. There is no close equivalent in taste and texture among sheep, cow, or goat cheeses,” reports the University of Pittsburgh Slovak Studies Program, one of The United State’s leading Slovak Studies universities. Unique food and drinks make up a significant part of Slovak culture, as the country produces several products which can not be found or replicated in any other part of the world; bryndza cheese is one of those products. 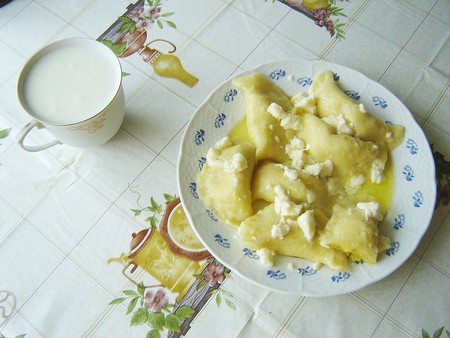 Bryndza cheese served with pirohy (dumplings) is extremely popular in Slovakia. | © of Branork/WikiMediaCommons

How is bryndza cheese made

Bryndza cheese is made by using at least a 50% concentration of sheep’s milk, although that percentage can be much higher depending on the preferences of the producer. It is a soft cheese very similar to feta cheese. The cheese is fermented with lactobacilli for several days, and for this reason is considered to be quite healthy for your gut. The amount of salt added is quite limited, and most Slovaks agree that the salt content should always be below 3% of the finished cheese.

How long have Slovaks been eating bryndza

Slovaks have been eating bryndza cheese since the 14th century, although it really only became common in the 17th century, according to written records. The word “bryndza” stems from a Wallachian word which Romanians used to designate any type of salty cheese. The first commercial production of bryndza cheese began in the 1780’s in the north central part of Slovakia, the Liptov region. This region even has its own sticker to designate the cheese which is made there, the Liptovská Bryndza. Since 2004, the name “bryndza” has been recognized by the European Union as a Protected Geographical Indication unique to Slovakia. 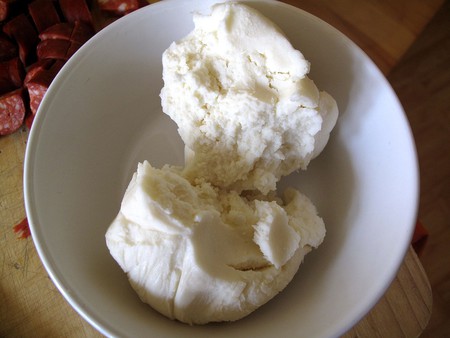 What is it used for

The health benefits of bryndza have gained international attention and a few studies have been done to uncover the hidden benefits of this tasty cheese. “Bryndza, said to help prevent cancer, has more than one billion microorganisms per gram and a large number of different hormones and enzymes, is unique to the country’s food industry. This ‘white gold’, as it is often called, has been produced in Slovakia for hundreds of years,” reports the Slovak Spectator, Slovakia’s only English language newspaper.

Although various studies suggest that bryndza cheese may have outstanding health benefits, most of the research is limited and preliminary. What can be easily agreed upon is that bryndza cheese is tasty and delicious. Used generously in bryndzove halusky, the cheese adds rich flavor to the hearty potato dumplings. Served on freshly baked bread, it adds exquisite flavor. Mixed together with tomatoes and peppers, the cheese works as an even more flavorful spread, perfect on crackers. 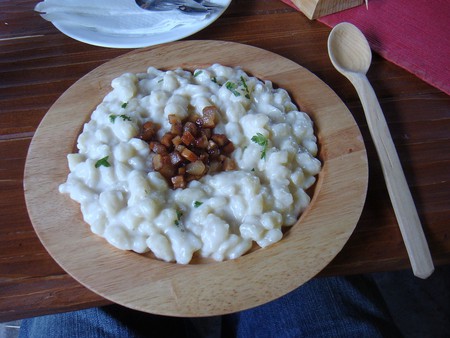 Outside of Bratislava, you can get great bryndzove halusky at corner pubs in small towns. For something a bit more special, head to the Liptovska Izba in Liptovsky Mikulas, for unforgettable dishes made with home made bryndza as the main ingredient.