20 Must Visit Attractions in Slovakia 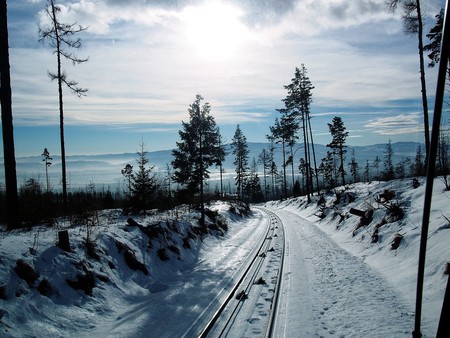 There’s way more than just 20 must visit attractions in Slovakia but if you only have time to cover the basics, here is a condensed bucket list of the most incredible places to check out. Tip: rent a car to see as many of these as possible, as several are located in areas difficult to reach by public transport!

Float Down the Dunajec River on a Wooden Raft

In Pieniny National Park, raftsmen navigate the Dunajec River on traditional wooden rafts while telling tourists local stories about the region. In addition to enjoying a unique and relaxing trip along the water, visitors to Pieniny can also take an old-fashioned horse and carriage ride or stroll around the natural travertine lake. 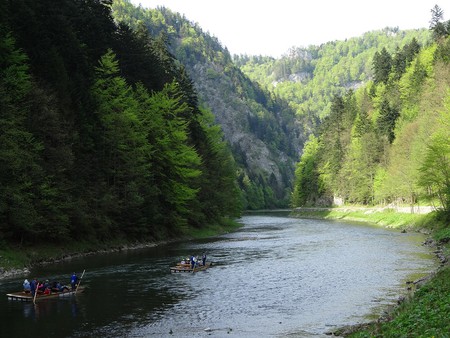 Head Up, Up, Up to Lomnicky Peak

The second highest peak in the High Tatras is accessible by hiking or via cable car. Breathtaking views over Slovakia’s mountainous terrain await at the top. To make your trip truly memorable, consider booking a room to spend the night at the highest local suite in Central Europe – at 2,634 meters!

Admire a Gothic Fresco at the Nitra Castle

One of the most recently discovered treasures at the Nitra Castle is the Gothic fresco of the Death and Coronation of Virgin Mary. The fresco was discovered during a large restoration and reconstruction project in the St. Emerson Cathedral on the castle grounds. 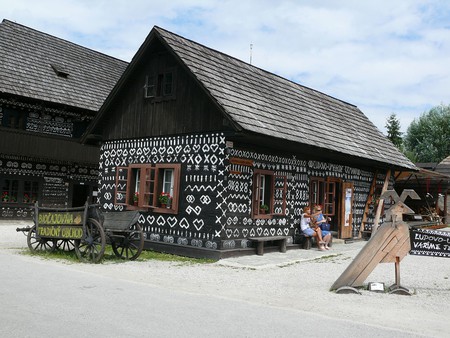 Step Back in Time in a Fortified Medieval Town

Bardejov is a well-preserved example of a fortified medieval town, included on UNESCO’s World Heritage List. Complete with town walls, burgher’s houses, a town hall, churches, and a Jewish quarter, the town has been able to maintain a high level of authenticity without any major demolitions or additions since medieval times.

Climb a Hill to an Important Calvary Site

The 18th century Baroque calvary site above Banska Stiavnica is famous for its unique construction, which consists of 17 stations instead of the traditional 14. Although an important religious site, it is also a remarkable tourist destination. The heavenly views over the old town of Banska Stiavnica, a UNESCO World Heritage Site, are worth the short pilgrimage to the top of the calvary hill.

Admire the Largest Church in Slovakia

St. Elisabeth Minister cathedral in Kosice is the largest church in Slovakia and an interesting example of Western-style Gothic architecture in the East. The church was built and ornamented between 1380-1477. The beauty of the church is not limited to the exterior, but also the stunning Gothic paintings adorning the walls inside. 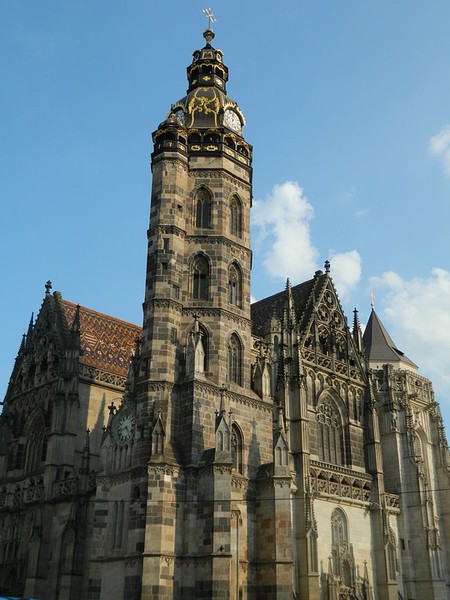 Visit One of the Youngest Modern Art Museums in the World

Located about 20 kilometers outside of Bratislava, the Danubiana Meulensteen is a treasure trove for modern art enthusiasts. Opened in 2000 on the banks of the Danube River, the Danubiana houses a contemporary art and sculpture collection including an impressive compilation of Slovakian art from the second half of the twentieth century. This is THE place to experience the best modern Slovak art.

During winter, the trails at Jasná Nízke Tatry comprise the largest ski area in Slovakia, which remains open from December to April. From April to November, hikers and mountain bikers flock to the mountain resort for fabulous Low Tatra mountain views and well marked trails with frequent rest stops at mountain huts and chalets.

Learn About Slovakia’s History at the Bratislava Castle

Dominating the skyline of Bratislava, on a small hill in the shadows of the small Carpathians, the large rectangular castle building commands attention from the city below. A castle has existed on this site since the 15th century, and the history of buildings on this hill dates all the way back to Roman times. Now you can find a museum of Slovak history in the castle. Lovely Baroque gardens are situated just to the rear of the castle and visitors are rewarded for the short uphill hike with spectacular views over the Danube and Bratislava’s Old Town.

The thermal waters in Piestany’s spas are said to have a variety of medicinal benefits; from assisting with migraines to therapeutic effects on inflammatory diseases. Regardless of whether or not you suffer from any medical ailments, the relaxing spas of Piestany are a tranquil escape. The Danubius Health Spa Resort Thermia Palace is a one stop vacation spot, offering a complete service spa and mineral pool, plus a restaurant and bar. The attractive art nouveau building is located directly on the walking and cycling paths along the Váh River.

The highlight of visiting Spis Castle is the opportunity to admire architecture from several centuries with an outstanding view towards the High Tatras mountain range. The oldest architectural remains in the castle date back to the 12th century, but visitors can observe additions which were made all the way through the 18th century, when it was used as a noble family’s home as well as a military outpost.

Take a Boat Trip on an Underground River

In the southwest of Slovakia, the Domica Cave is home to the underground Styx River, which visitors can cruise along on a guided tour in a small boat. The cave is also home to about 1,500 bats, you might spy some hiding in the cave’s impressive stalactites and stalagmites. 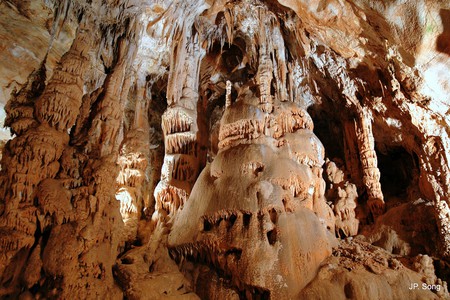 Race Down the Waterslides at Tatralandia

The largest water park in Slovakia is open all year round with thermal relaxation pools and saunas for adults and 26 slides for the young and young at heart. Even in winter it feels like summer in Tatralandia’s Tropical Paradise, where the temperature is consistently maintained above 30°C, making it the perfect place to unwind in the evenings after skiing at one of the nearby Tatra mountain resorts.

Catch Your Reflection in the Neoclassical Hall of Mirrors

The iconic Primatial Palace in Bratislava was constructed between 1778 and 1781 for Archbishop Jozef Batthyany. Many important political events have occurred in the palace, which now serves as the seat of the Mayor of Bratislava. Don’t miss the fabulous Fountain of St. George and the Dragon in the interior courtyard!

Escape to the Himalayas in a Castle

Slovaks love to drink tea and they’ve got a ton of castles. Put the two together and you’ve got the Tea House in a Castle, located in the medieval Zvolen Castle. Step into the dimly-lit room cut into the stone walls of the castle and take a seat in one of the low chairs, or on the floor in the loft (no shoes allowed!) for a more authentic tea house feel. Then order your favorite type of tea, freshly prepared and served in cute teapots and cups.

Only 10 kilometers away from Bratislava on a hill on the banks of the Danube sits the ruins of what once served as an important fortress in the Great-Moravian era. Pack a picnic to enjoy in the shade of the castle on a day trip to Devin and take the river cruise boat back to Bratislava in the afternoon. 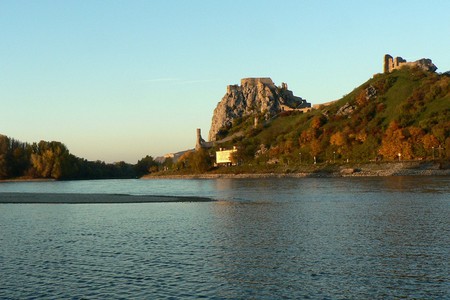 Devin Castle on the Danube. | © Vikino/Pixabay

On a hill overlooking the city of Bratislava, you can find The Slavin Memorial, the burial site of 6,845 Soviet soldiers who liberated Bratislava from the Germans in 1945. The massive Stalinist-style monument makes you feel small in comparison and the huge graveyard standing watch over the city is a meaningful spot for reflection.

The Kremnica Mint was first documented in 1441, and has been producing money for various rulers, monarchies, and republics ever since. Today the mint manufactures euro coins and commemorative coins. Several other countries place orders for coin manufacturing to Kremnica due to the high quality standards maintained by this well known mint.

Observe Bratislava’s Main Square from Above

In addition to viewing artifacts from the Neolithic period to today, visitors to the Museum of City History in Bratislava are rewarded with a stunning view of the city’s main square from the top of the old town hall tower. Plan to spend two to three hours enjoying the museum’s interesting display of historical objects such as invitations to craftsmen’s guild balls, original packaging from Slovak food companies, and folk arts and crafts from the 1920’s.