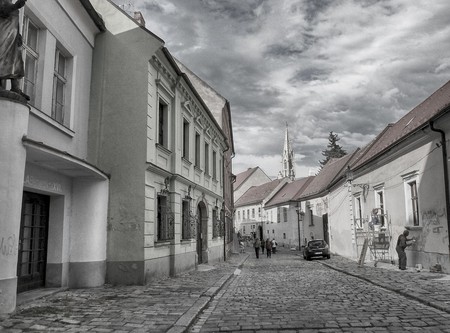 Before Bratislava became Bratislava, it was first called Possonium (Latin), Pressburg (German), Pozsony (Hungarian), and Prešporok (Slovak). Its long history means that the famous Bratislava Castle is just one of several hotspots in Slovakia‘s capital. Read on for Bratislava‘s must-visit attractions to add to your itinerary.

One of the most unique churches in Central Europe, this Art Nouveau masterpiece is painted baby blue with white accents and darker blue roof tiles. The result is a whimsical, fairy-tale like façade and an interior which feels more like a ballroom than a church.

Perched on a small hill, the castle enjoys the best vantage point of the Old Town. If you hike for about 15 minutes, you can enjoy the views, stroll through the Baroque gardens, sip a coffee in one of Bratislava’s most scenic cafés or visit the Museum of History in the castle.

Another iconic symbol of the city, the UFO Tower is located at one end of the SNP Bridge across the Danube. Take the elevator 95 meters (312 feet) up to enjoy the views from the observation deck, or make reservations to sample the innovative cuisine in the restaurant. The tower belongs to the World Federation of Great Towers and was seen as an engineering marvel when it opened in 1972. 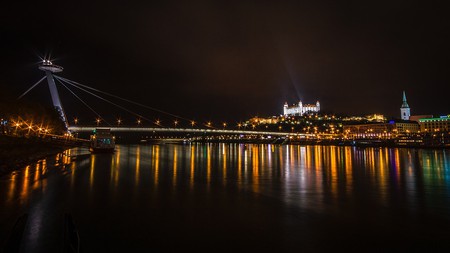 This tower with a view is located on the opposite side of the city from the UFO, at the top of Kazmik Hill in the Bratislava Forest Park. It also features an observation deck and a restaurant, plus visitors have the added bonus of exploring the trails of the park on their way there. From the city center, you can take the trolley and then walk 45 minutes uphill through the park. Alternatively, you can drive or a take a taxi to the top.

The Old Town Hall is a beautiful building both inside and out. Inside, the Museum of City History occupies most of the space. Don’t forget to head down to the basement to see examples of Medieval torture instruments, then walk up to the top of the tower for a fabulous view of Bratislava Old Town’s main square. 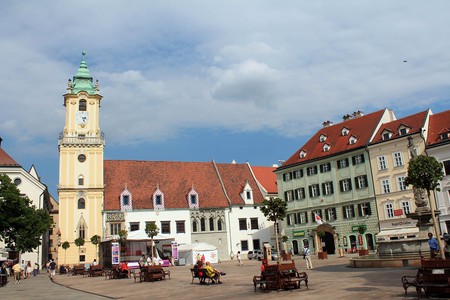 This memorial is dedicated to the Soviet Army soldiers who lost their lives while liberating the city from the occupying Germans. Slavin lies on a hill just behind the Bratislava Castle. Many people head up here for the views, but the monument, which dates to 1960, is also an interesting example of Stalinist architectural style.

This is one of the most beautiful and well-preserved classicist buildings in Bratislava. City Council meetings take place here, but most of the second floor is open to the public. Visitors can enjoy royal tapestries from 1630, examples of period furniture from the 18th and 19th centuries in every room, and the elegance of the Hall of Mirrors.

Art lovers will be delighted with the fabulous collection of works by Slovak masters and the remodeled modern interior in this Old Town palace. The focus of the Nedbalka Gallery is showcasing the work of artists working in Slovakia from the late 19th century up until the present day. To accomplish this, they host several temporary exhibitions throughout the year in addition to the permanent collection.

Don’t miss your chance to see an opera, ballet, or theatrical performance in the Old Building of the Slovak National Theatre which dates back to 1886. The building looks similar to performance halls in Vienna because it was designed by Viennese architects in a Neo-Renaissance style. You’ll find a variety of performance available throughout the day with favorable ticket prices – spending an evening here is not to be missed.

If you are interested in seeing an authentic Czechoslovak military bunker from 1930, this is the place. The old bunker has been converted into a museum which showcases weapons from both World Wars and the Cold War. You can also see how the bunker would have been set up and used by soldiers. The museum is a bit outside of the city, so you’ll need to rent a car or a bicycle to get there.

You’ll know that you are entering the pedestrian area of the Old Town when you pass through St. Michael’s Gate. One of the oldest buildings in town, it is the only city gate which has been preserved since Medieval times. You can climb the tower and check out the small Museum of Weapons and City Fortifications.

The Bratislava region is blessed with a fantastic climate for growing grapes, but fortunately for visitors, Slovaks also know a few things about brewing high quality beer. You can buy a bottle of Slovak-produced Saris, Urliner, or Zlatý Bažant in any pub or supermarket, however, Bratislava also features several great craft breweries. Bratislavsky Mestiansky Pivovar is so popular that it now has two locations in the city center. They’ve been producing beer since 1752, so you’re sure to find something you’ll enjoy.

The best time to visit the Danubiana Meulensteen is from May through October, when you can take a riverboat cruise from Bratislava’s city center. Modern art fans will enjoy getting to sample the best works from recent and current Slovak artists. The large museum also hosts many eclectic, funky, and trendy temporary exhibits throughout the year.

If you love castles, there’s more than the impressive Bratislava Castle to see! You can also pay a visit to Devin Castle, which is only about a half an hour away from the city on the Danube River. You can cycle, take a bus, catch a train, or relax on a river cruise to get there. Once there, you’ll need a few hours to climb up to the top of the castle ruins and admire the view. This castle hasn’t been restored, but that’s part of what gives it a special historic charm

This cathedral was the site of the Hungarian empire’s coronations of kings and queens between 1563 and 1830 – the popular Queen Maria Theresa was crowned here. The cathedral is Gothic in style and features huge stained glass windows. It’s also possible to go beneath the cathedral to check out the interesting crypt and ancient catacombs – don’t miss this! 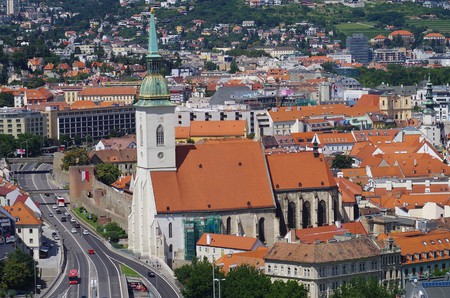 The Slovak National Gallery collection is a treasure trove of Slovak art from over hundreds of years. The collection is so large that it cannot all be housed in one location, so the Gallery has buildings in five different Slovak cities to showcase the very best works of artists working in Slovakia from the Middle Ages to today.

Take a photo with Cumil

Bratislava’s got a few funny statues around which provide perfect photo ops, but Cumil is by far the most famous. Make sure you watch your step while walking through the Old Town because Cumil is not very tall. He’s a bronze representation of a man who is working on the sewers and has just popped his head up to get some air. Quirky? Definitely. Must-take photo? For sure! 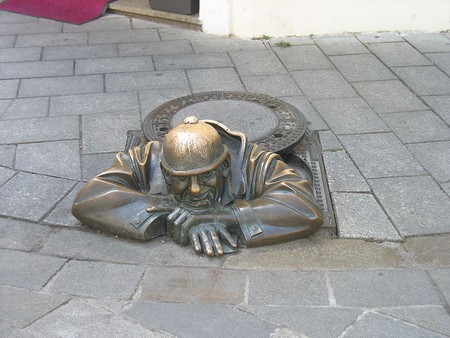 If you need a break from the hustle and bustle of the city center, go for a stroll in Bratislava’s Horsky Park to get some fresh air. This large protected nature area is only about a 20-minute walk away from St. Michael’s Gate and the pedestrian streets of the Old Town. It is a popular place for locals to come to run, walk their dogs, or cycle.

Everyone who visits Bratislava with kids should visit the Bratislava Zoo, where there are all sorts of animals such as giraffes, hippos, red pandas, leopards, monkeys, apes, and crocodiles. There is also a Dinopark with life size dinosaur models.

If you love cars, you’ll absolutely love the collection of the Bratislava Transport Museum. With more than 100 cars from the interwar period to the 1970s, as well as several old motorcycle models, you’ll feel like you’re at an old car show. Slovakia is now a major car manufacturer in Europe, and this museum does a great job of tracing the history and development of cars produced in this region over almost 80 years of history.