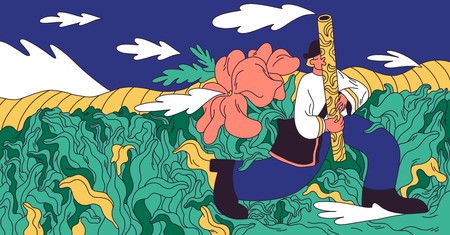 Slovak is the official language of just one small country in Central Europe and has a total of around six million speakers. Slovak is similar to Czech, as they both evolved from the western division of the ancient Proto-Slavic language. Although it’s not necessary to speak Slovak to get by while visiting Bratislava, knowing some of these beautiful words could help you to win favor with the locals.

This incredibly important and frequently used word describes something or someone who is beautiful, lovely, wonderful, nice, or exquisite. You might have a krásny experience if you go skiing all day with your best friends at a mountain resort in the Tatra mountain range.

The Slovak word for flower sounds lovely. Slovaks often give each other beautiful flower bouquets in celebration of their name day, when a person is celebrated on the day of the saint for which he or she was named. Many Slovakian people dream of having a garden; community gardens and small plots are very common, as well.

This is a diminutive suffix that is used as a term of endearment and is often attached to the end of a name. It is similar to calling someone “my dear.” Someone with a friend named Andrej might call him Andrejko. A woman named Jana might have friends and family who use the –ka ending and call her Janka.

This cute phrase is used before eating and means “good appetite” or “enjoy your meal.” Slovaks and Czechs always wish each other “Dobrú chuť ” before eating, whether they’re with close friends or near strangers.

The fujara is an important part of any Slovak folk music festival. Originally used by shepherds in Central and Northern Slovakia, today, learning the fujara is often a skill passed on from father to son. The fujara is on the UNESCO list of Masterpieces of the Oral and Intangible Heritage of Humanity. Listen to the fujara before visiting Slovakia so that you will quickly pick up on its unique sound at a summer folk music festival, such as the Pol’ana Folk Festival in Detva.

Láska is the Slovak word for love, and the endearing term moja láska, or “my love,” is also frequently said. It’s used in many song lyrics, from Slovak pop songs to traditional folk choruses.

There is love, and then there is a higher level of loving that is described as close to adoration. Milujem ťa is used to describe romantic love for a long-term boyfriend or girlfriend or a husband or wife.

This word stems from Slovakia’s history as a nation that heavily relies on agriculture. Additionally, the similar “Sedliak” is a common last name in Slovakia and refers to a family whose original profession was working the land. The word might also describe a person who comes from a small rural village to a city and tries to fit the image of a city dweller. The term gained in popularity when many Slovaks were forced to move from the villages where they lived and worked to communist cities from the 1950s to 1980s.

Zábava means fun or amusing. Catching a summer music festival in Slovakia is certain to be zábava, as is rushing down the water slides at Tatralandia.

Šťastný means feeling happy. It’s also a popular surname, as in the case of three famous brothers who played ice hockey in Slovakia: Marián Šťastný, Peter Šťastný, and Anton Šťastný. Anton was the first person born and trained in Slovakia to be drafted in the NHL. He played for the Quebec Nordiques.

Parents often call their children miláčik, and partners often call each other miláčik, many times husband to wife. In 2008, a Slovak sitcom called Ano, miláčik, or Yes, darling premiered during mid-week primetime. Unfortunately, the funny show lasted only one season, but the phrase is still as popular as ever.