Old Water Tower, Yekaterinburg | ©Mikhail Markovskiy/Shutterstock
Dubbed the constructivist capital of Russia, Yekaterinburg has several stand-out buildings that reflect the city’s industrial history and the grand ideas of Soviet times. Constructivism, born out of the art movement of the same name in the early 20th century, employed design to further socialist ideology as well as immensity and geometry to create bold, epic and conceptually mind-blowing buildings and structures. To this day, they are the mark of an era driven by radical ideas and bold change.

Shop
Shaped like a hammer and sickle, this residential complex was originally designed for the People’s Commissariat for Internal Affairs (NKVD), the Soviet Union’s secret police force. In the heart of Yekaterinburg, the extensive complex contained dormitories, residential and public buildings, including cultural centres, health and educational facilities. Collective living was seen as an important socialist achievement, and so ideology strove to challenge living space distribution. Encouraged to cook and bathe in shared facilities, the original living quarters, which formed Chekist Town’s outer border, were without private bathrooms or kitchens.
More Info
Open In Google Maps
69/1 Prospekt Lenina, Yekaterinburg, 620075, Russia
View menu
Visit website
Visit Facebook page
Send an Email
Give us feedback

Built in 1933 as direct result of Stalin’s first five year plan (the roadmaps for Soviet economic development beginning in the 1920s), which outlined a strategy to create heavy industry quickly throughout the Soviet Union. A team of young architects were given the task of creating the industrial plant and workers settlement that housed workers and their families, providing them with amenities and services. This micro-city became central to the mafia gang conflicts that plagued Yekaterinburg in the 1990s, at the end of the USSR.

Continuous windows panel the entire building’s perimeter and a semicircular staircase sticks out from it’s facade. While designed out of necessity (printing facilities require bright light), these style features, went on to become signature design elements in constructivist buildings. Built in 1926, the building housed multiple publishing and printing companies and a local branch of the TASS photo agency. During WWII offices were made smaller to accommodate relocated writers from other parts of Russia. While parts of it remain unused, a music venue and multi-purpose arts and hospitality spaces now take up a chunk of it and the building hosted the first Ural Biennale Festival in 2010. 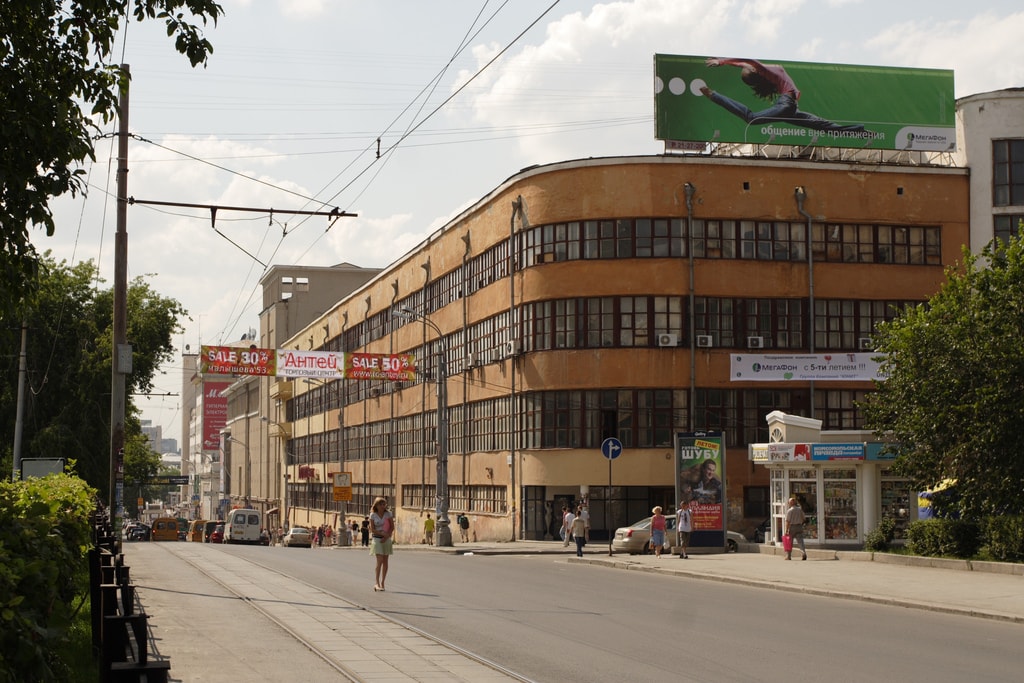 Originally built to be a hotel, when construction was completed it became a women’s dormitory instead. During WWII it turned into an evacuation hospital before returning to a dormitory when the war finished. Built by Béla Scheffler, one of the few German architects who came to the Soviet Union in the 1920s and 30s to help create worker accommodation for newly constructed plants. The building is painted bright red using a paint developed by the Uralmash lab, which proved to be durable throughout the years, but the building is in a fairly shabby state currently.

Using block geometric shapes to resemble a tractor, a symbol of collectivisation and a homage to the agricultural workforce, the House of Communications was designed in 1933 and still operates as a post office today. Back then, however, the enormous building was also a telephone company, a day care, kindergarten and an 800 seat radio theatre. There were also rooms where employees could socialise, based on their interests, without leaving their workplace. 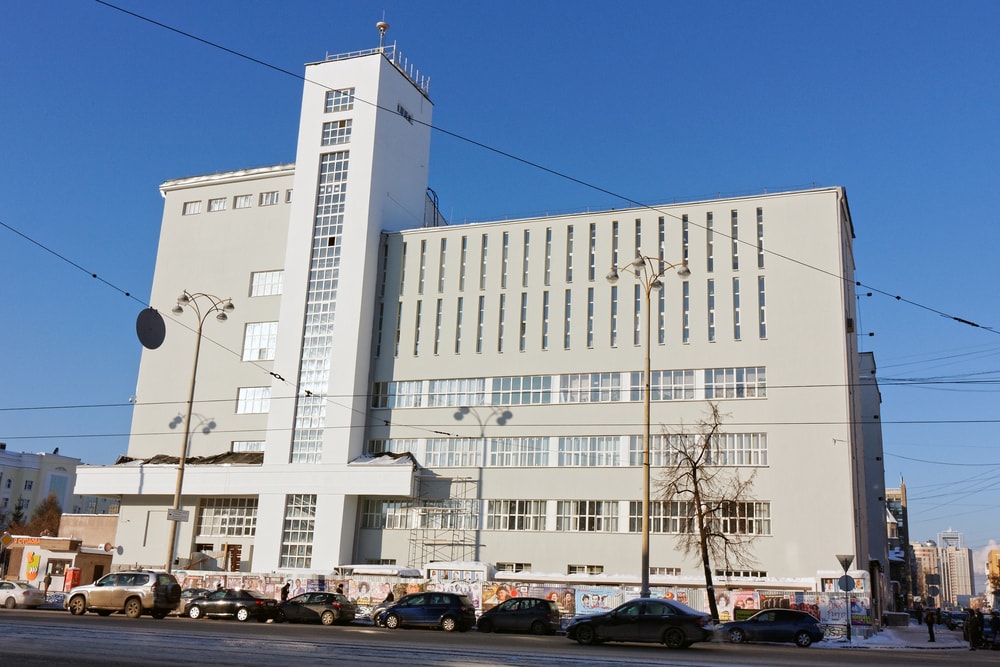 Communal living was a common practise in Soviet times, where many apartments had shared facilities for the multiple families that lived there to use. University dormitories, workers housing and accommodation for singles in particular were often designed to enhance and maximise use of communal space. Uraloblsovnarkhoz Dormitory housed singles and small families. Shared areas had high ceilings and big windows, while bedrooms had lower ceilings and smaller windows so the building could accommodate more residents, and to promote the communal space.

Stadium, Sports Center, Building
Dinamo Sports Centre | © EhayDy / Shutterstock
Jutting out on the northern banks of the city lakes, the sporting complex’s is aptly shaped like a ship. Balconies and windows are designed to look like lifeboats and and the V-shaped window to look like a bow. Designed by leading Ural constructivist architect Venuamin Sokolov, one half of the team who designed the General Post Office Building, it was at risk of being demolished in the 1980s and replaced by a war memorial. It has gone on to become one of Yekaterinburg’s most iconic constructivist buildings, only now to be at risk again of being pulled down and being replaced by a church.
More Info
Open In Google Maps
12 Ulitsa Yeremina, Yekaterinburg, Sverdlovskaya oblast', 620027, Russia
+73433883082
View menu
Visit website
Visit Facebook page
Send an Email
Give us feedback

Building
At the time of building the tower was the largest water tank in the world, however, it has been poorly maintained over the years since it stopped being used in the 1960s. Considered to be one of the great constructivist design achievements at the time, the cylindrical cell on stilts was innovative at the time, and building the construction employed the latest technologies of the time. It also was the first concrete structure built in the region. Despite several attempts to restore this iconic structure into something more functional, it is still in a bit of a shabby state.
More Info
Open In Google Maps
2a Ulitsa Bakinskikh Komissarov, Yekaterinburg, Sverdlovskaya oblast', 620039, Russia
+79030839123
View menu
Visit website
Visit Facebook page
Send an Email
Give us feedback
Give us feedback