Where to See the Last Imperial Fabergé Eggs Around the World

Where to See the Last Imperial Fabergé Eggs Around the World

© Parée / Flickr
The Russian royal family took their Easter eggs more seriously than most. Easter was a time of jubilant celebration for the ill-fated clan who inspired some of history’s most exquisite examples of objet d’art. Imperial Easter eggs were exclusively commissioned by the Romanov royals, and expertly crafted by the House of Fabergé. Only 50 imperial Fabergé eggs were ever made, and 43 survive. Gaze upon some of the world’s finest luxury craftsmanship at these nine museums.

Museum
Map View
Renaissance Egg | © Михаил Овчинников / WikiCommons
The Fabergé Museum holds the world’s largest collection of eponymous works. Crafting more than imperial eggs, the design house also created opulent jewelry and collectibles. Founded in 1842 by Gustav Fabergé, his son, Peter Carl, took over the business in 1872. Peter Carl’s “artistic taste and remarkable energy” landed the firm in the royal family’s good graces, and in 1885, Fabergé became the official Supplier of the Imperial Court. By 1890, Peter Carl was the Appraiser to the Cabinet of His Imperial Majesty. Located in Shuvalov Palace, the museum is as grand as its collection. It holds nine Fabergé eggs, including the Hen Egg, the first imperial Fabergé egg gifted to the Empress Maria Feodorovna by her husband Alexander III, and the magnificent Renaissance Egg, the last one the Empress would receive.
More Info
Open In Google Maps
21 Fontanka river embankment, Tsentralnyy rayon Sankt-Peterburg, 191023, Russia
+78123332655
Visit website

The British royal family has been collecting Fabergé objects since the days of King Edward VII and Queen Alexandra. While the jewelry house was lesser-known in the United States until the 1930s, European royal families had been exchanging Fabergé gifts since the late 1800s. Queen Alexandra was purportedly “one of Fabergé’s greatest supporters,” regularly exchanging their products as birthday and Christmas gifts. The King and Queen subsequently purchased three imperial Easter eggs, on view at the Royal Collection Trust in London: the magnificent Colonnade Egg Clock made with gold in four colors, platinum, and rose diamonds; the delicate Basket of Flowers Egg made from silver, gold, blue enamel, and diamonds; and the exquisite Mosaic Egg, made of intricate bits of gold, platinum, pink and clear diamonds, rubies, emeralds, sapphires, and moonstone. 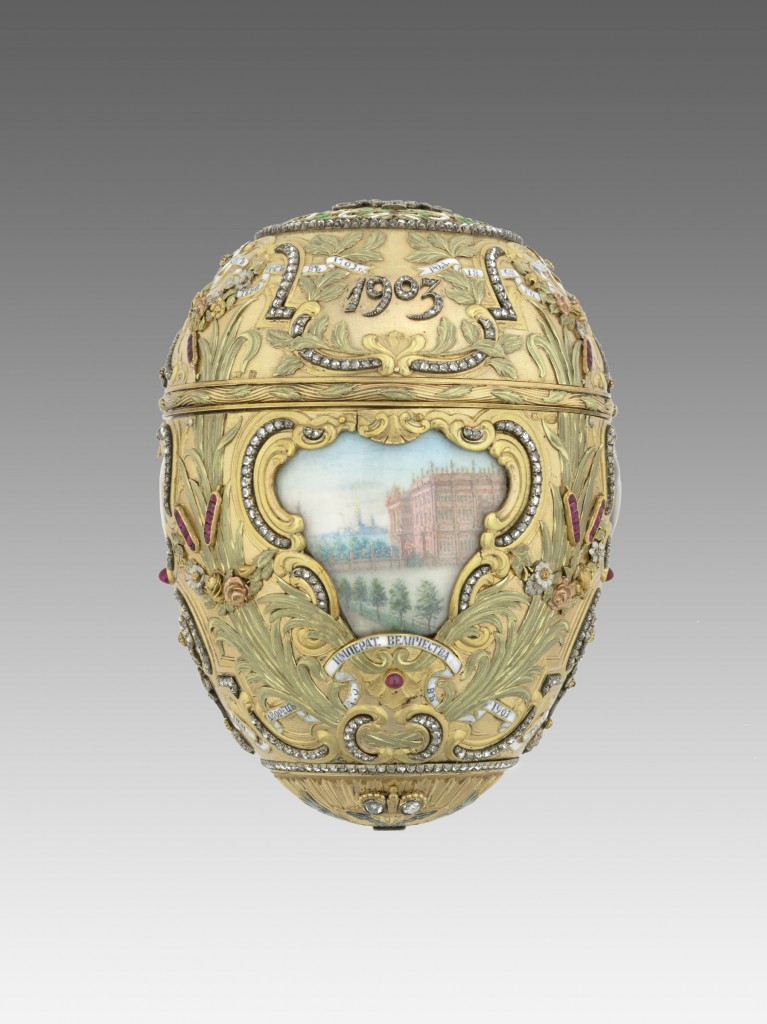 Museum, Stadium
Map View
Catherine the Great Easter Egg, 1914. St. Petersburg, Russia. Gold, diamonds, pearls, opalescent enamel, opaque enamel, silver, platinum, mirror | Courtesy of the Hillwood Museum
The Kremlin Armory in Moscow holds the largest collection of imperial Fabergé eggs in the world. House of Fabergé was commissioned to craft imperial Easter eggs for the royal family for 11 Easters, and in that time, constructed some of history’s finest, most valuable works of objet d’art. The Kremlin’s collection of 10 imperial eggs includes the Moscow Kremlin Egg, a gold and silver jewelry box resembling Russia’s most famous building; the Clover Egg, a diamond-studded gold and green egg given to Empress Alexandra by her husband Emperor Nicholas II to commemorate their happy marriage; and the golden Clock Egg, “remarkable for its elegance and technical perfection.” Built in 1508 and established as a museum in 1851, the Kremlin Armory is one of the oldest Russian cultural institutions.
More Info
Open In Google Maps
Tsentralnyy administrativnyy okrug Moskva, 125009, Russia
+74956970349
Visit website

Museum
Map View
Rose Trellis Egg | © Walters Art Museum / Wikicommons
Baden-Baden’s Fabergé Museum is exclusively dedicated to the life and works of Carl Peter Fabergé. In the museum’s collection is one imperial egg: the entirely unique Imperial Constellation Easter Egg. Made from nephrite, rock crystal, blue glass, gold, and diamonds, the Imperial Constellation Easter Egg is comprised of a deep blue sphere wrapped in a golden dial. Diamonds form the shape of a lion in honor of Tsarevitch Alexei, who was a Leo. The sphere is propped up by billowy clouds of rock crystal. The piece was supposed to bear five angels ascending towards the glass sphere, but the museum supposes that this detail was left incomplete due to the start of the Russian Revolution. The egg was intended to be an Easter present to Empress Alexandra in 1917, but it was never gifted to her due to the war.
More Info
Open In Google Maps
30 Sophienstraße, Baden-Baden, Baden-Württemberg, 76530, Germany
+497221970890
Visit website

Museum
Map View
Gatchina Palace Egg | © Walters Art Museum / WikiCommons
The Walters Art Museum in Baltimore houses two imperial Fabergé eggs: the Gatchina Palace Egg and the Rose Trellis Egg. The gold, diamond, and enamel Gatchina Palace Eggwas a present from Nicholas II to his mother. The top flips open to display a miniature gold replica of the Gatchina palace outside of St. Petersburg. The elaborate Rose Trellis Egg is heavily adorned with gold, pink and green enamel, and diamonds, lined with satin. A gift from Tsar Nicholas II to his wife, it opened to reveal a diamond necklace and a miniature portrait of the royal family on ivory and framed with diamonds. Both gifts were lost, though an impression from the diamonds is said to be left on the satin.
More Info
Open In Google Maps
600 North Charles Street, Mount Vernon, Baltimore, Maryland, 21201, USA
+14105479000
Visit website