Where to Find Food That Russians Eat in St Petersburg 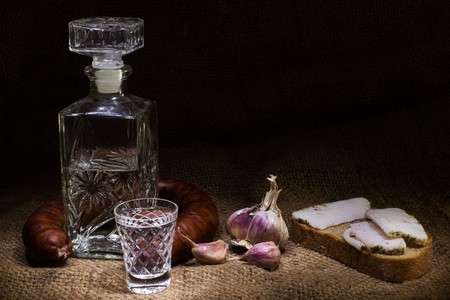 Russians love eating strange food, even though some of it may not be the most beautiful. However, intrepid travellers in St Petersburg who are willing to look past appearances and indulge in some local favourites should give these a try. They won’t disappoint!

Where to eat salo

In a nutshell, salo is a slab of pig fat. In Russian, and in many Eastern European cuisines, it is used as a cooking ingredient, but can also serve as a delicious snack. There are many ways to eat salo – it can be smoked, fried, salted or braised. Usually eaten on a piece of bread with some greens or onions on top, a salo sandwich is a common snack to have with a shot of vodka. Try it at a place specialising in salo, such as Korchma Salo café, in St Petersburg.

Where to eat pirozhki

Pirozhki are a traditional addition to Russian meals. They are made of rich dough with sweet and savoury fillings. The hearty meat ones can be eaten with soups, and sweet ones with tea. You could say it’s a must that every mother in Russia knows how to make these at home, but for those who haven’t mastered it just yet, there are plenty places to get them already made. The Troika bakery is one of the many places around town that serves great pirozhki in a variety of flavours.

Vobla is a type of dried and salted fish that may look unattractive, but in fact makes for a perfect beer snack. It is a very common fish in the Volga river, in fact so common that there was an overflow in them. Later, vobla became a product that was salted and stored for the winter. Coincidently, the salty flavour worked excellently with beer and became an easy and cheap snack in the Soviet era. Now it is less typical to find it in pubs, as modern pub grub takes it place. Still, pubs like Pobeda, remain loyal to the tradition and still serve vobla with a cold pint.

When describing what kholodets is, the best way to put it into words is meat jelly with bits and pieces floating in it. While it may not sound like the most appealing dish, Russians have been eating it since the 16th century. The ingredients that should be ideally found in the perfect kholodets are cow head, cow brains and all four legs. Other parts of the cow are also acceptable. Paying homage to this traditional dish, the fashionable Probka restaurant serves the famous Russian kholodets according to all rules and regulations.

Where to eat tongue

Oh yes, tongue. Russians love eating it. Cooking beef tongue is actually fairly lengthy process, but the end result is a very soft meat, best eaten cold with a pinch of salt. If you’re ready to take bite, then head over to Tartarbar – a meat-lovers’ paradise. Here you can find all parts of animals served up in interesting dishes. Beef tongue is also on the menu and paired with stracciatella cheese. An unusual, but delicious combination.