Where Have Russia's Lenin Statues Gone? 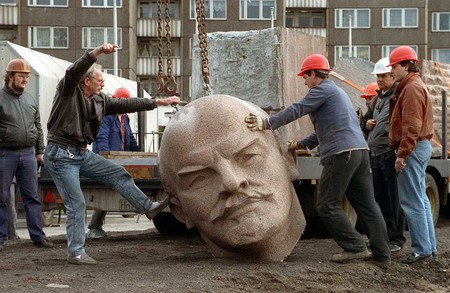 Although the USSR fell in 1991, the thousands of Lenin statues that littered Russia and the post-Soviet states did not. Not at first anyway. As former states of the USSR began to cleanse themselves of occupied life, Lenin statues were vandalised, pulled down and disappeared from view, popping back up in far-flung places. From a Seattle neighbourhood to a pool hall in Mongolia, where did all the Lenin statues go?

During Soviet times, Russia alone had around 7,000 concrete and stone memorials to the father of the first Communist state. Tens of thousands of statues were erected across the Soviet Union and in allied Communist countries. For the most part, Russia’s Lenin statues remain scattered through the countryside and cities as a reminder of the Soviet era and in tribute to a revolutionary many still revere today.

In Moscow alone, there are over 80 Lenin statues that mark squares and parks around town. Volgograd still has the tallest Lenin statue, which stands at around 30 metres tall. A whopping great big bust of the forefather still holds court in Ulan-Ude’s central square in the Siberian Republic of Buryatia. Made from solid stone and weighing in at 42 tonnes, the head has survived plans of dismantlement and has been restored and is still fondly received by the city’s residents; apparently, they even knitted a huge hat with earflaps to keep the bust warm through the frosty winters.

Since the breakdown of the USSR, however, much of the former Soviet Union and allied nations have removed or destroyed Soviet iconography. When the Communist state fell, Ukraine was packed with over 5,500 Lenin statues, which served to remind the Ukrainian people of an ideology that occupied their country and controlled their lives. They began to disappear the statues in quiet acts of defiance and then in open acts of rebellion. In 2015, as part of a process to eradicate traces of Soviet-era Communism, the Ukrainian government passed legislation banning these statues.

Ukrainians defaced, decapitated and toppled remaining Lenin statues, so that none remain standing today. Lenin debris, however, litters the country in odd places. In various states of disrepair, they have been abandoned in warehouses, parklands, garages and unused spaces, or remain half-standing on their original plinths, all unable to be fully destroyed or preserved.

Other Lenin tributes have fared better in their post-Communist worlds. Erected in 1958 by the third Soviet Antarctic Expedition, a Lenin bust still weathers the Antarctic cold as it looks towards Moscow from its icy locale. A five-metre Lenin statue made in Czechoslovakia in 1988 outlasted the Czech Communist state, which fell in 1989, and so the statue was sent for scrapping. In 1993, a resident of Seattle discovered the statue, fell in love with it, and at great personal cost had it shipped back to his home city, where it remains an issue of public contention.

Mongolia served as a Soviet satellite, and in 1980 Ulan Bator founded a Lenin museum. When democracy returned, the museum housed the Mongolian People’s Party, which has since been turned into a very grand pool hall where a mammoth Lenin bust peers over pool sharks playing their games.

But it is not just anti-Communist sentiment that has flung these icons across the globe. In attempts to rescue Lenin monuments from anti-Soviet protesters, statues have been dumped in hard-to-reach places, including in the ocean. Dubbed the ally of former Soviet leaders, there is a museum of sorts in Tarhankut, Crimea. The final resting ground for a number of rescued busts and statues of the former leaders – including a bust of Lenin – lie on rock shelves 14 metres below water.