When Is the Best Time of Year to Visit St Petersburg? 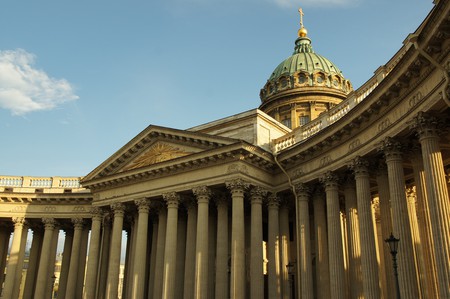 St Petersburg is a city where you can experience four seasons in a single day – some jokingly say that the best way to spot a local is to check if they’re carrying an umbrella. Though the weather can be unpredictable, the best strategy isn’t to avoid it, but rather come prepared. Here’s what you need to know.

January is a very laid back time to come to St Petersburg – the first week of January is a public holiday, and though most businesses should be back on track by January 2nd, locals will be about and about which can mean that most attractions will be more crowded than usual. As for New Year’s Eve, a number of bars and restaurants hold parties. A unique way to celebrate would be greeting the countdown on Palace Square among thousands of people. It’s quite cold, as the weather in January is below freezing, so dressing in lots of layers is recommended.

February is still going to be a chilly winter month, but even though it gets quite cold, there can also be some beautiful winter scenery. Locals will be heading out to large parks in the environs such as Catherine’s Park and Pavlovsk to ride down snowy hills or to do cross-country skiing. There are also plenty of opportunities to ice skate, especially outdoors. The celebration of ‘Maslenitsa’ often falls on the last week of February (depending on the Easter dates for the year). The best tradition of the week is that you get to eat lots of pancakes, while on the Sunday there’s singing and dancing in parks around the city to greet the spring, followed by a bonfire. 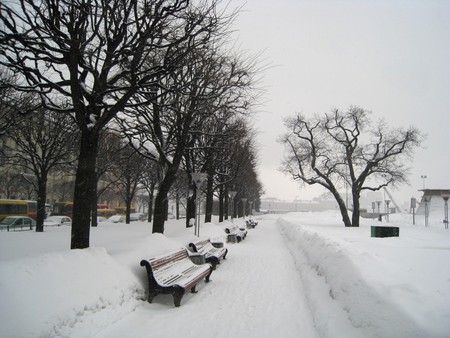 Although it’s the first month of spring, March still tends to be cold, which leaves another month for enjoying winter sports. As with the most part of winter, apart from the week of New Year holidays, the city is not frequented by many visitors – especially when compared to the summer months. If the cold doesn’t bother you too much, then exploring St Petersburg in the winter/early spring can be very rewarding – there are no queues, no crowds and the cost of accommodation will be much cheaper. The only issue is that under the snow, the parks of royal palaces won’t have their greenery and may seem less cheery than in the summer days – even the imperial family only lived there in the summer and spent the winter in the Winter Palace, better know as The Hermitage. 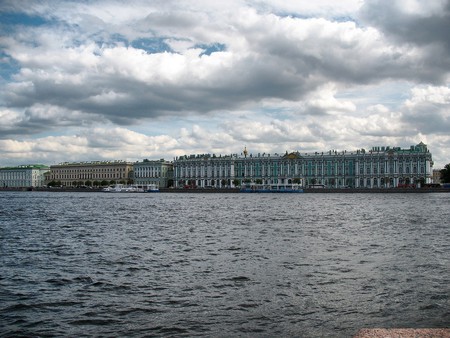 Spring is in full swing and the city begins to warm up. Naturally, that means higher temperatures are about to come, but it also means that you’ll be jumping over many puddles to enjoy it all. The Neva river also starts to thaw and chunks of ice start floating downstream – this is how St Petersburg locals know that winter has finally ended. The parks in and outside St Petersburg are also likely to be either wet or closed off for drying, so that their grass can recover after the winter. Still, those not particularly keen on outdoor activities should not feel discouraged, because museums and palaces will be operating as usual. 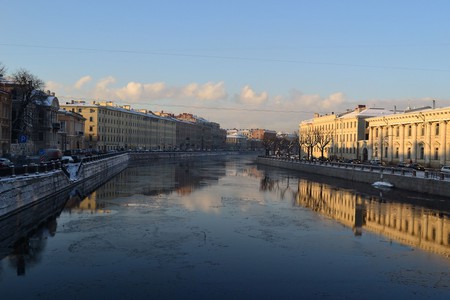 Russians in general love May. First of all the weather is significantly better, but also there are plenty of public holidays at the start of the month – there’s Labour Day on May, 1 and Victory Day on May, 9. Both these dates are celebrated with parades around the city, so be prepared for crowds and road closures. There is also a very special date for St Petersburg this month – May, 27 is the city’s birthday and naturally a big celebration, with parades, shows, and special exhibitions. 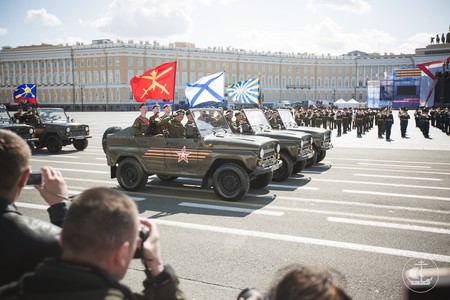 June is known as the month of ‘white nights‘ – the whole month goes without a proper night. Long days, warm weather and an array of festivals make this time of year the most popular for visiting the cultural capital. Exploring the city on foot at night, when it’s basically still light, but the streets are completely empty, is a fun experience, but also a very peaceful one. During the day, of course, everybody will be back out there, museums will be busy, so if you are solo travelling it’s best to sleep in and start your day later. Since tourist groups usually go to museums in the morning, there is a big difference if you decide to make an appearance later. Moreover, you won’t be losing any daylight. 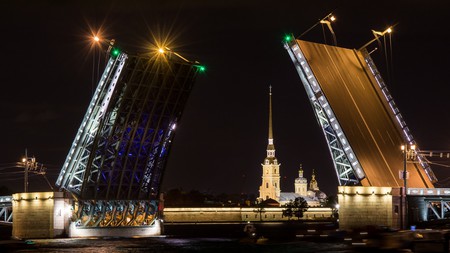 Despite the perception that Russia is always cold, which in some places it is, St Petersburg has distinct seasons, and summer does come to the Venice of the North. July is definitely one of those months when there’s a high chance of being caught out on a very hot day, and walking outside for hours or pushing through crowds at museums becomes less bearable when it’s hot outside. It’s also good to take into consideration that there is no air conditioning in public transport and inside museums. Don’t abandon the idea altogether, but just stay hydrated and make good use of the evening breeze. A cruise down the Neva River would be a great idea this time of year. 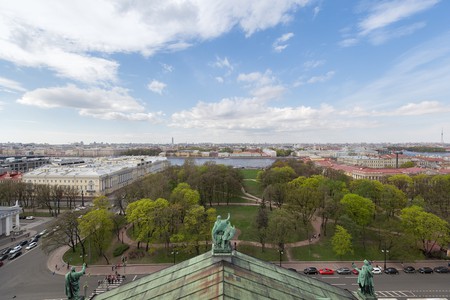 The start of August is very much the same as July. The weather tends to be quite hot, but starts getting milder at the end of the month, although with an increase in showers. August would be opportune to visit the parks in the city environs. It won’t be too hot for long walks around nature, especially under the shade. The only drawback of August is the lack of theatre life, since the major theatres will be out on tour. There will be a smaller choice of shows available, but not enough for art-hungry visitors. 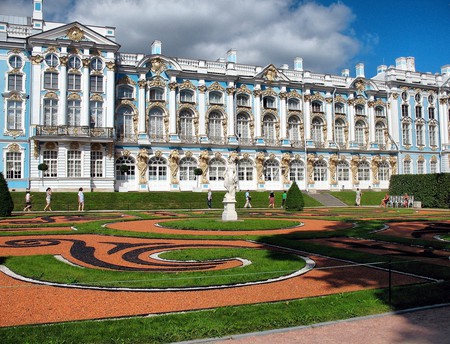 When autumn comes to St Petersburg, the city turns a golden colour. This is a great time to visit the parks in and surrounding the city – when the leaves start falling the city will look very different. Also, since the summer season will be coming to an end it will be less crowded everywhere. At the end of the month, the fountains in the Peterhoff park shut down for the winter – usually there is a closing ceremony somewhere around mid-September. 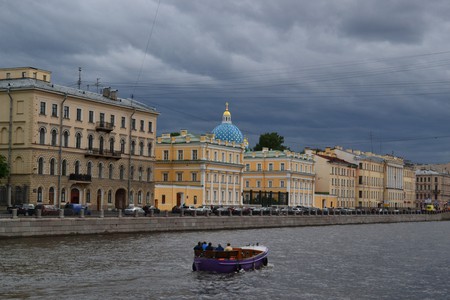 October is really the start of cold weather in St Petersburg. There will be snow during the first part of the month and the start of the month is normally rainy. Outdoor activities are probably not the best call for this time of year, and it’s important to be flexible with your schedule, in case there is a weather crisis. October is also the time to draw the line on going on boat cruises. They are likely to continue running, but won’t be particularly enjoyable, as the embankments get very windy at this time of year. October is an excellent time to explore bars and restaurants, which are in abundance in St Petersburg. 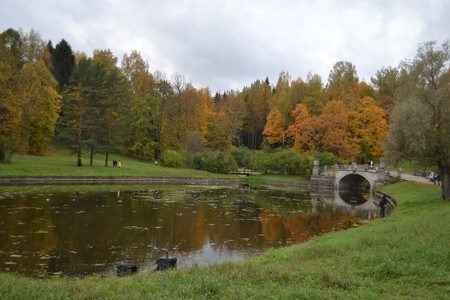 The weather becomes increasingly unpleasant and wet. November is probably not the best time to visit, but compared to summer, prices for flights and accommodation start coming down rapidly. The decrease in visitors also means fewer people in museums, which can make all the difference. Frequent showers and snow will soon make the parks too mucky for outdoor exploration. This is a good month to experience art, visit museums and get warm over a bowl of soup. Make sure to try the king of Russian soups – borscht. 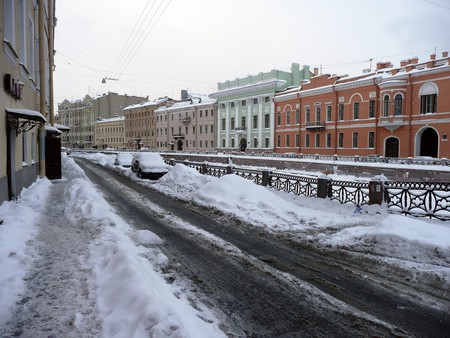 Usually December feels a bit hectic towards the end of the month, as everybody starts to get ready for the New Year. The start of the month can still bring some unstable weather, with occasional increases in temperature. If the cold weather settles, it’s a good time to try winter sports. If it’s not cold enough to ski and go for sleigh rides in the parks, there are special artificial mountains around the city that will be operating from early December. Theatre life is very much alive during the winter. A special Christmas favourite is the Nutcracker ballet – it will be on throughout the holiday season, but book in advance as tickets sell out fast. 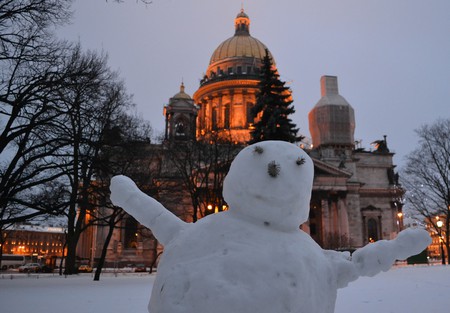 When not to go to St Petersburg

St Petersburg can be a tough place to visit in the winter. Generally speaking early winter (December-early January) and early spring (March-early April) are not the favourites of most locals, let alone visitors. The inconsistency in weather makes it hard to plan ahead and the cold can make exploring fairly limited.