Your World Cup 2018 Guide to Volgograd 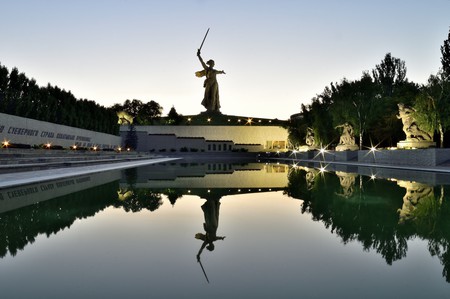 Here are the essential things to eat, drink and see in the historic city of Volgograd during the FIFA World Cup.

Where to eat in Volgograd

If you’re after traditional local cuisine, make sure to visit to Velvet. Alongside classic Russian dishes, it also serves a number of cocktails and wines, and plays host to some of the best DJs and musicians around. Make sure you try the Russian vinaigrette and borscht (beetroot soup). Volgograd has a fantastic coffee shop scene, and the brunch at Café Korzik is a great way to start the morning or to recover from the night before.

Where to drink in Volgograd

There are a number of bars in Volgograd that offer wide screens and beer, but most of these places are probably not ready for the huge number of visitors expected for the 2018 World Cup. Avoid disappointment and check out our recommended list of sports bars to watch the match. For a safe bet, head to Alkhovski, a spacious bar located in the heart of the city.

What to see and do in Volgograd during the World Cup

Volgograd is probably best known for its Second World War history, with the city, which was then called Stalingrad, witnessing the war’s bloodiest battle. Much of the fighting took place on and around Mamayev Kurgan, a hill above the city. The site is now home to a gigantic statue named ‘The Motherland Calls’ and a memorial complex with the names of over 17,000 soldiers etched into a huge wall. The landmark is a must-visit for history enthusiasts and casual visitors alike. If you’re after a nature escape, head to Lake Elton, which is one of the largest salt lakes in Europe. The trip might take up the whole day, but it will be worth it. Check out these other great things to see and do in Volgograd during the World Cup.

How to get to Volgograd’s FIFA Fan Fest Zone

Volgograd’s FIFA Fan Fest Zone is located on the banks of the Volga River, around the Central Stair along the 62nd Army Embankment. The region is named after the regiment that defended the city during WWII and hosts a number of public events. You can take the 95 bus to Lenina Square or, if you’re arriving by metro, Lenina Square station is around a 20-minute walk away from the embankment.

How to get to Volgograd Arena

Volgograd Arena is located right in the heart of the city, very close to the Mamayev Kurgan war memorial. The central location provides easy access by foot from almost every part of the city. Alternatively, you can take the 95 bus or the 9 and 12 trolleybuses. The Mamayev Kurgan railway station is just a 10-minute walk from the stadium.