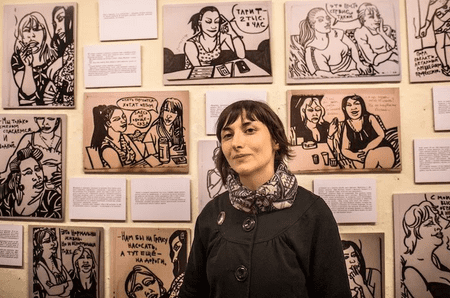 Victoria Lomasko at Fantagraphics in Seattle

The newly translated work blends drawing and documentary journalism to tell the daily lives and experiences of modern day Russians.

There is a glint of political resistance in Other Russias, artist Victoria Lomasko’s new book of documentary drawings, a patina that comes from a delicate and richly animated attention to stories of Russians at the margins of society. But marginal does not mean minority: Lomasko sketches portraits that are in many ways typical of its citizens daily life. The lives and events depicted here do seem to offer up other Russias, one that exists beyond the bombastic geopolitical parade of Putin and his oligarchs.

Lomasko, who was born in the late 1970s and raised in a town on the southern border of the Moscow Oblast, belongs to a generation that is old enough to recall the timbre of life in the Soviet Union, but came of age in the post-Soviet 1990s and early 2000s. From this vantage point, she describes her elderly subjects as people who seemingly “woke up in the wrong country” (as she put it in an interview about her work), suddenly negotiating a market economy and an unraveling safety net, after living the first half (or more) of their lives with an unwaveringly communist worldview. 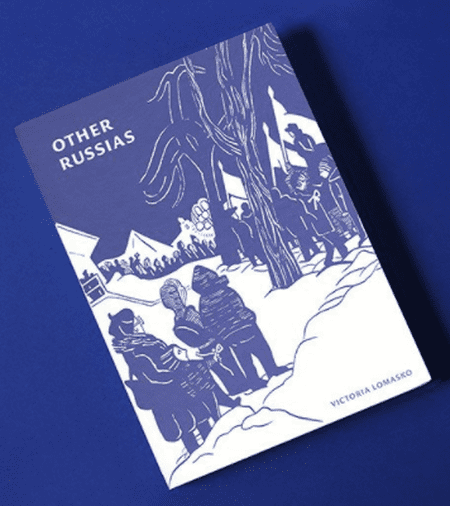 The stories in Other Russias unfold between 2009 and 2017, a chapter of the country’s history that might be neatly bookended as “post-post-Soviet,” marked by Putin’s reconsolidation of federal power, and of his administration’s renewed animosities with the West. For those more familiar with Russia beyond these aggressions, this volume offers a welcome respite from what is reported on it by the Anglophone world, a representation of the country that often leaves the textured lives and experiences of modern day Russians unexamined.

For those unfamiliar with the country’s culture aside its troubled diplomatic relations, Other Russias brings into view startlingly familiar situations: lower-class frustration and dismay with a government’s’ penchant to forget them, blue-collared fury over government-corporate collusions to tax and pass costs onto workers, and blatant disregard and discrimination toward the well-being and legal rights of its LGBTQ and immigrant populations. Lomasko leaves American readers wondering if the Russian state really is so different from the US and, if not, how long it might be before political show trials like the Pussy Riot affair (also depicted here) commence.

Lomasko documents the lamentations of this era in a genre that she calls “graphic reportage,” a blending of pen and ink drawings with documentary journalism. Her unique combination of drawing and text is neither a non-fictive account nor is it a graphic novel. Instead, Lomasko has modeled her style on dembel’skye albomy, a visual vernacular tradition that chronicles quotidian occurrences—the diaristic drawings kept by newly enlisted soldiers ; or the sketch journals documenting the Siege of Leningrad; or life in Soviet prisons. This stylistic mode scratches at an underground, punk, DIY, or samizdat aesthetic that lends the sense of viewing unauthorized material. These single-paneled illustrations are often accompanied by short quotations of speech either over-heard by or spoken to Lomasko, who annotates their broader contexts. All of these notes appear in a translation by Thomas Campbell which, aside from a couple of awkward word choices, is quite capable and compelling. The overall effect seduces the reader to flip page after page in the “just one more” mentality of the best graphic texts.

Lomasko’s acute eye for observation allow her to bring meaning to mundane details down to buttons, styles of clothing, even tea cups. This talent is especially strong in her depiction of brutality, such as in the grisly segment, “Slaves of Moscow,” in which Lomasko interviews a group of women who were lured to the city from their Central Asian hometown by the prospect of a steady job in a grocery store. Instead, their employers become captors, forcing them to live in brutal conditions and to work long hours without pay, beating them indiscriminately: 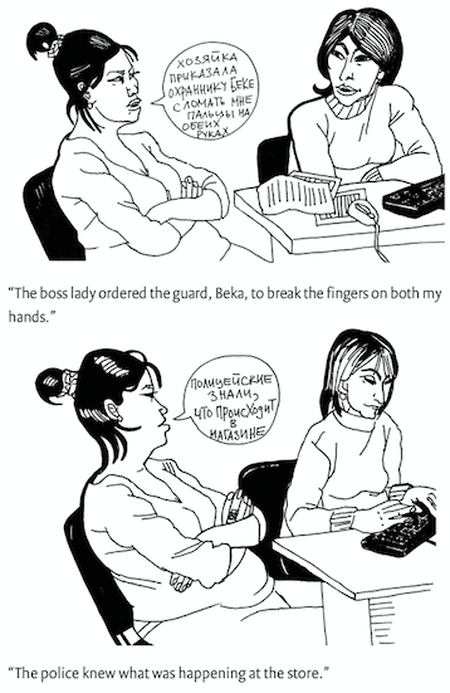 Rarely do we get a glimpse into the inner workings of modern day slavery, yet Lomasko’s quickly-sketched portraits and matter-of-fact tone belie a rare rapport: an intimacy between a documentarian and her subjects that conventional journalism, even with photos, is incapable of capturing.

Lomasko’s ability to connect with her subjects brings to mind the creative journalism of the Nobel laureate Svetlana Alexievich, whose much lauded Secondhand Time (masterly translated by Bela Sheyevich) blended genre and form by blurring the lines between objective history and subjective account through artistic interpretation. In many ways, Other Russias is Secondhand Time‘s punk younger sister—it’s not clear how faithful the drawings are to real life occurrences, or how verbatim Lomasko has recorded the words she quotes—but its these impressions, as complex as any truth, that give her work expressive depth.

At the same time, Lomasko’s portraits don’t entirely escape politicization, leaving a noticeable gaping hole where we might spot the normalities of around white, middle- and upper-class Russian society. We don’t see ofisnyy plankton (literally “office plankton,” a colloquial term for the swarms of young Muscovites working tech and media jobs) eating at hipster dumpling spots, or bank employees packing for ski trips, or retired grandmothers taking their preschool grandchildren to swimming lessons while their adult daughters work. These things aren’t alien to Russian culture, yet when only dissident art reaches the eyes of audiences abroad, there is a risk that foreigners receive an image of Russia as an always insidious, constantly depraved, and utterly unlivable country.

Of course, by leaving the center out of her frame, the book can be also used to ascertain important implications for global resistances beyond Russia. In this regard, it shares an affinity with Sarnath Banerjee’s lovely All Quiet in Vikaspuri, where his panels depict the ironies and strange confluences of neoliberalism in India. Yet perhaps what most distinguishes Other Russias, and makes it so affecting, is that Lomasko, unlike a journalist, seeks to enter into these relationships with the understanding that she is no different from her subjects. Inverting the trend in contemporary arts that pitches artists as elite intelligentsia, Lomasko digs into the Russian tradition of complaint, wherein personal narratives of discontent are a kind of national pastime (as in, for example, the citizen journalism on Sotnik TV), to emerge with a wide appealing work of social art.