Unique Souvenirs You Can Only Buy From Russia 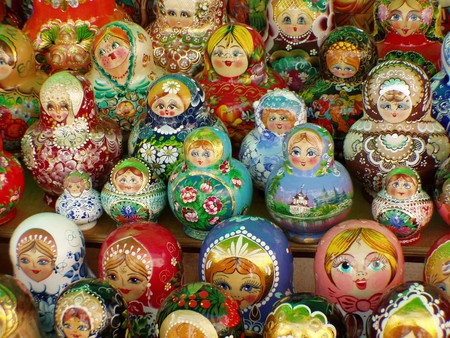 Holidays may not last forever, but souvenirs brought home from around the world can bring up fond memories for years to come. When making a choice of which Russian souvenir to bring back, look for the most authentic and unique items that represent years of delicate craftsmen and dedicated work. Here are our top picks:

The name of these lacquer miniatures comes from the village of Palekh, located outside of Moscow. Since the seventeenth century, the art of icon painting has thrived here. Artists in Palekh traditionally worked on icon commissions and would also travel to decorate the interiors of churches and cathedrals. After the revolution in 1917, when religion was forbidden and icon painting was no longer popular, times grew hard. Yet the artisans continued their work and transferred their craft onto lacquer miniatures depicting scenes from Russian folklore. Their technique still closely resembles that used on historic icons: elongated figures, image positioning and the use of tempera paints. The paper-mâché boxes are covered in several layers of lacquer giving them a brilliant shine.

A tea set made of imperial porcelain

Russia was no stranger to the growing passion for Chinese porcelain. It became very popular in the Imperial court and likely influenced Empress Elizabeth’s order to establish a porcelain-making factory in St Petersburg. Russian engineer Dmitry Vinogradov invented a formula to produce porcelain independently in Russia. The Imperial Porcelain Manufactory worked only on commission from the court and received substantial support from the royal Romanov family. An iconic design of the St Petersburg porcelain is the cobalt net pattern. It was created in the late 1940s and has become one of the most recognised designs of Russian porcelain.

Nesting dolls, or matryoshkas as they are called by locals, are one of the more traditional souvenirs to bring back from Russian. They have gained world-wide popularity for their sets of five, seven or more intricately painted dolls that fit perfectly inside each other. Simply painted and carved ones can be found easily, while dolls with exquisite decoration and meticulous carving are harder to find, as they are true works of art. The White Nights Company is based in St Petersburg and takes extra care to produce unique nesting dolls, with carefully drawn images and detailed decorative patterns. These tiny works of art are not souvenirs to buy for all your long-lost cousins, but they make a gift for those who appreciate art, or maybe you’ll want to keep it for yourself to remember your trip to Russia.

Pendants in the style of Fabergé

The Fabergé name has become famous around the world, especially with royal families falling in love with Fabergé eggs in the mid nineteenth century. Every Fabergé egg took much trial and error and every gift could take up to a year to complete. After the 1917 revolution, Fabergé discontinued its work and many of the eggs from the royal collection were lost. Now, acquiring a real Fabergé egg is near to impossible, but its possible to buy pendants from the only jeweler holding the patent to the hot enamel technique of Fabergé. Olga Pomelnikova makes egg-shaped pendants from silver, gold and precious stones, coated in a layer of hot enamel, the composition of which is made using a recipe similar to the one used by the Fabergé house.

Portraits of girls wrapped in colourful headscarves may seem an outdated image of Russian fashion, but in truth, these shawls are making a come-back. The colourful patterns on scarves and shawls can be paired with almost anything ranging from an evening dress to a winter coat. The most authentic shawls are produced in the town of Pavlovsky Posad. Here over 800 types of shawls are made from various materials, including wool, cotton, silk and linen. The pattern is then printed onto the item and completed by hand. A practical and beautiful souvenir from Russia, a Pavlovsky Posad shawl won’t disappoint.

The name of Gzhel pottery first appeared in the seventeenth century, when clay was widely mined in the vicinity of the Gzhel village. Craftsmen produced clay figurines that were decorated with a distinctive white background (made using a tin-based glaze). Then the ornaments would be painted using paints of various colours, mainly blue. Gzhel miniatures can be purely decorative, depicting people, animals or just ornate patterns. More practical objects, such as kitchenware and teapots can also be made with Gzhel clay and will compliment most households.

A bottle of Tsarskaya vodka

You haven’t been to Russia if you haven’t tried a shot of proper vodka, a liquor that mixes well in cocktails, but is also pleasant to enjoy on its own. Vodkas in Russia range from dirt cheap to premium quality. Tsarskaya vodka is literally translated as ‘vodka for the king’. The recipe for this vodka was allegedly copied from the archives of Peter the Great, the first Russian emperor. This vodka undergoes a twelve-step filtration process before being put through a final filter lined in 24-carat gold, which leaves particles of gold inside the vodka. A truly royal drink.

The name of these famous trays once again comes from the village where they are crafted. Zhostovo village, located just outside of Moscow, was already known for the production of lacquered paper-mâché boxes with flower-ornaments. This tradition was then transferred to the production of metal trays in the nineteenth century. Rich, colourful flowers on a black background create a beautiful souvenir that is truly Russian.