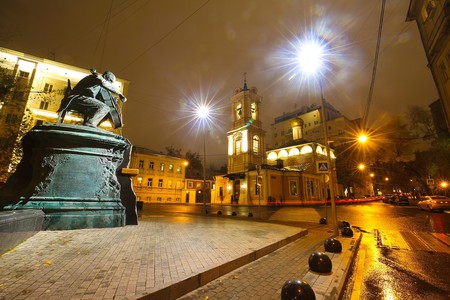 Tverskaya Street is the main, most central, and longest street in Moscow, and it’s a true historical gem of the Russian capital. The street starts from the main entrance gate to the Kremlin, continues past Pushkin Square, leads to Triumph Square and the Tchaikovsky Concert Hall and then crosses the whole central district of Moscow. The street is full of imposing old buildings, department stores, cafés, restaurants, and even the small house museums of famous Muscovites who used to live and work here. This area is considered to be one of the most pleasant places to go for a stroll or have dinner. Here are some of the most significant historical facts about this street in details.

Tverskaya Street was a favourite spot of Russian poets.

Believe it or not, there are still some old monuments on the alley near the street dedicated to the two most famous Russian poets: Esenin and Pushkin. They’re easy to get to and lovely to photograph. This place is quiet and never crowded.

Patriarch Ponds – another famous area in the Tverskoy neighbourhood – is the place where Mikhail Bulgakov’s famous Master & Margarita book was written, and all the actions took place right around the ponds. The current Patriarch Ponds neighborhood is one of the most expensive residential areas in Moscow, and it’s a favourite place for locals on the weekend.

The appearance of the street was completely changed during the reconstruction of the early 1930s.

The Soviet government wanted to make the street wider, and thus many small and tiny buildings were destroyed, while others were moved back and reconstructed.

For many years, Tverskaya Street was called Gorky Street.

Mystery? Not at all. The street was renamed Gorky Street after the famous socialist writer Maxim Gorky, one of Lenin‘s favourite Russian authors. After that, the street became the most significant one in Moscow, full of Soviet-era architectural projects managed by the government and Lenin himself. The original name of the street was restored in 1990.

The first McDonald’s in Russia was opened on Tverskaya Street.

The first spot of this famous American fast food restaurant was established in Moscow back in 1993 and opened its doors to the public on Tverskaya Street. Locals waited in the enormous queue for hours just to taste American fast food.

The famous Stanislavski Acting Method was created on Tverskaya Street.

Konstantin Stanislavski and Vladimir Nemirovich-Danchenko worked together at the Chekhov Moscow Art Theatre in the Tverskoy District. There, they invented and established a hyper-realist theatrical style, which later became known as method acting and became one of the main leading systems for actors around the world.

The first hotel was established on Tverskaya Street.

The Hotel National, located on the corner of Tverskaya and Mokhovaya Streets, was one of the first international and national hotels in Moscow, and it was introduced to the public before the famous Russian Revolution. Right after the Revolution, Lenin forced the Bolshevik government to move there from old buildings and offices.

The biggest and the oldest telegraph building in Moscow is located on Tverskaya Street.

This building was built in 1926, and it’s still considered to be one of the first important Soviet building projects in Russia. The current Telegraph building is an open-space office to many small start-ups and creative minds who prefer to work in such an ambience.
Central Telegraph Building, Tverskaya Street, Moscow, Russia

The first and only Armenian supermarket and restaurant are located on Tverskaya Street in the same building.

Restaurant, Asian
Facebook
Email
Twitter
Pinterest
Copy link
Share
Map View
The first Armenian supermarket opened its doors back in 1952 and became one of the favourite spots of locals and Armenians for gourmet and traditional food shopping. Later the administration decided to open a typical Armenian restaurant in the same building. Even nowadays, the design and interior of this spot remains the same as it was many years ago.
Give us feedback