The Trans-Siberian Railway famously spans one of the world’s most iconic journeys, offering the opportunity for a rich cultural awakening. On the 5,000 mile stretch from Moscow to Beijing, Conrad Birch discovers exactly what it means to take this seven-day adventure through some of the most beautiful countries in the world. 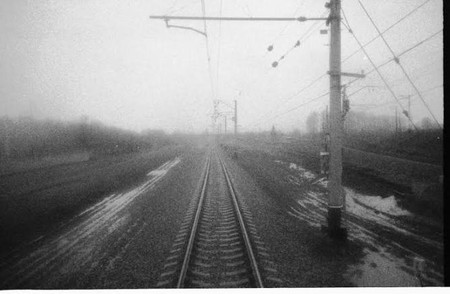 I began my Trans-Siberian journey armed with War and Peace, believing 1200 pages to be doubtless manageable in seven solitary days on a train. How wrong a person can be: I managed less than 100 pages of the great tome, having spent seven days and six nights laughing, drinking vodka and engaging in sparkling conversation with my fellow travellers.

In addition to the sheer romance of train travel – reason enough to embark on the journey – the Trans-Siberian railway did seem a novel way of reaching Australia. Having flown to Sydney more times than I care to remember, I am only too aware of the limitations of flying. As Calvino wrote, ‘to fly is the opposite of traveling: you cross a gap in space, you vanish into a void, you accept not being in any place for a duration that in itself is a kind of void in time; then you reappear, in a place and in a moment with no relationship to where and when in which you vanished’.

I was concerned however, that I had swapped a relatively swift day’s travel on an innocuous metal tube – flying with countless films at my fingertips – for a much longer period of seven days inside yet another, much slower, metal tube. It was the element of the unknown that worried me and for this reason alone, I decided to board the train and conquer the fear.

This fear had all but dissipated before the train had started heading east from Moscow’s frozen Yaroslavaskig station. The excitement of intimately engaging with each of the stages in the journey immediately banished concerns – the snow on the Urals lay in wait. 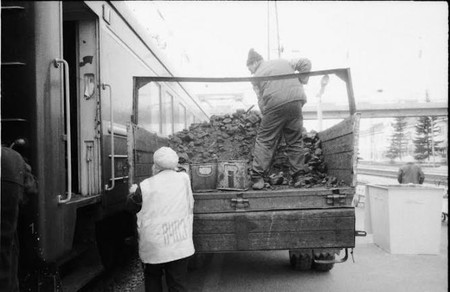 I booked 2nd class tickets on the Trans-Siberian railway expressly to engage with like-minded travellers and share experiences. The train soon filled up with not just Russian, Chinese and Mongolian passengers but also Dutch, Swiss, German, Swedish and Finnish individuals – an undeniably delightful, eccentric mix of solo travellers. When fate throws a group of people together on a train – where, in all probability, they must remain for a structured period of time – it would seem that the train itself was the eccentric element, with us travellers merely actors in her play.

The night on which we left Moscow was freezing, with only layers of blanket available to keep us warm. When the crew witnessed our shivers, the coal was promptly stoked until the carriage resembled a sauna and very soon our previously treasured blankets lay scattered on the floor.

By Beijing, our group was to become more than merely traveling companions. Indeed, by the end of the journey we had become firm friends, sharing not only vodka but laugher, stories and song. Cocooned together, we shared everything with an unbridled and socially uncharacteristic delight, due, in part, to being each other’s only point of contact for a week, across a 5,000 mile stretch all the way from Moscow to Beijing. 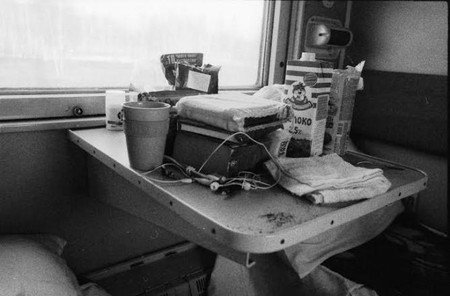 Stopped at Valdimai station for 23 minutes to collect coal, water and vodka.

I did not begin this journey with hopes of overt luxury and this train certainly does not indulge creature comforts: no showers, intermittent heating, a hard mattress and little food make for decidedly rustic charm. In lieu of mobiles and internet connection however, we had vodka on tap, riotous conversation and a distinct lack of sleep. This was getting back to basics in the very best possible way – somewhat like appearing in Wes Anderson’s longest running film. 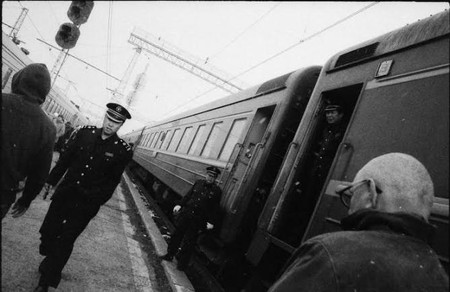 Stopped at Tayga station for 2 minutes.

The dining carriage – changing at every border – provided us with a different setting for cards, affording a scenic spot for enjoying games of backgammon long into the night. The kitsch Russian dining carriage would not have looked out of place in a 1970s adult film, complete with dazzling, glitzy lights and faux-glamour. By Day 5 we had softened the dour demeanours of the waiting staff by sharing our vodka and encouraging the odd smile – after all, who can resist the buoyant moods of happy travellers? By the time we reached Mongolia the décor of the dining carriage had been paired down considerably and the food markedly improved, whilst the dining carriage in China offered free food and was constantly full – sadly quashing those of us with hopes of whiling away the after dinner hours with cards and vodka.

Without showers it is surprising how quickly you embrace a new look – with hair matted and myself and others remaining unshaven, we sung along to Bob Marley like true free spirits. 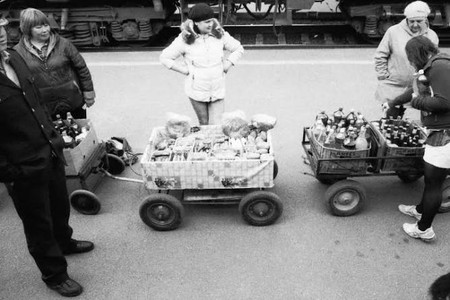 Stopped at Irkutsk for 25 minutes before moving onto Lake Baikal, which was covered with solid ice.

During this brief sojourn, we sat by one of the train windows and enjoyed a small snapshot of native life – watching a fisherman dig a hole, wait patiently and succeed in catching a fish. I am sure we purchased his catch further along the line, having been dried to perfection and served up in the dining carriage. Or was that an illusion? Perhaps he kept the catch for himself? How tasty was it really? By this stage in the journey, it was hard to hold onto a sense of the reality in the outside world. 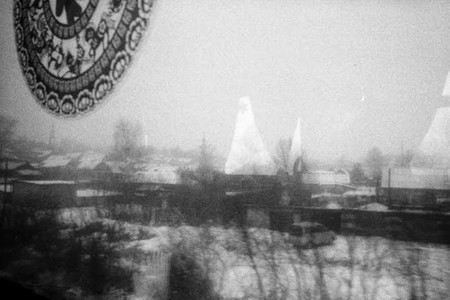 Stopped at Sukhe Bator for customs and immigration, with the sight of the Gobi Desert ahead of us.

The abiding souvenir from a week’s friendship and total immersion in the lives of others is the gaining of a united memory. This sudden converging and almost forced entanglement of personalities on the train joined us together in a shared experience – the journey is now a part of a united past that binds us together forever, long after we drift apart.

Joss was the first to initiate the swapping of stories, sharing his own motivation and inspiration behind embarking on the journey, whereas Sonya set up a makeshift cinema, featuring a mini-season dedicated to Bill Nighy, complete with popcorn.

It was a greatly musical journey with a friendly contest organised and monitored by Selina. Patrick performed a Sonny and Cher song in his own unique and memorable style, Isabella offered a fresh, unique sound not unlike young YouTube sensations and Joe sang Mack the Knife, impressively accompanied by a used ice cream container ‘tuned’ by an elastic band. ‘Hans’ Christian sang My Way supported by the backing melody of a tablet computer and Eero went from being unsure and withdrawn, to emulating an electrifying Snoop Dog. A Mongolian man, who spoke no English, simply enjoyed the jovial atmosphere of the group, laughing and sharing his vodka, whilst a Russian woman treated us to a Beatles medley. As for myself, I looked to someone who would have been inspired by this train journey and entertained the crowd with Bobby Brown Goes Down. 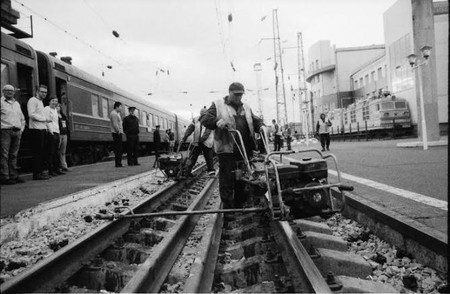 My brief love affair with the Trans-Siberian railway was now over. I had become an ex-traveller, lovelorn and left to reflect. Like any defining love affair however, life would never be the same again. Without a doubt, the people and the journey shaped me in new and unexpected ways but it was the incredible camaraderie and friendship that gave me the experience and empathy I sought, becoming an undeniable example of real wealth – measured in the currency of human kindness.