A Tour of the Russian Museum in 20 Artworks 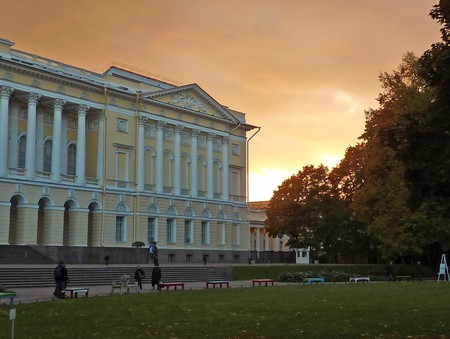 The Russian Museum is one of the most significant collections of Russian art in the country. The permanent exhibition, located in the Mikhailovsky Palace, features over 400,000 exhibits from the tenth to twenty-first century. To say the least, it is a thorough overview of Russia’s art history. Here are 20 artworks for a quick introduction to the famous museum.

The Last Day of Pompeii by Karl Bryullov

Bryullov first had the idea for this work when visiting his brother in Italy. They visited the remains of Pompeii near Mount Vesuvius, and an image began to form in his mind. On his second visit, he made a few sketches, and when the work was completed, he brought it to Rome for exhibition. The work depicts the moment Vesuvius erupted and the many lives that would soon be lost. Among the people in the painting, there is a self-portrait of the artist himself – a young man holding paints and brushes. In 1834 the painting was sent to St Petersburg, where it received recognition of the highest level. 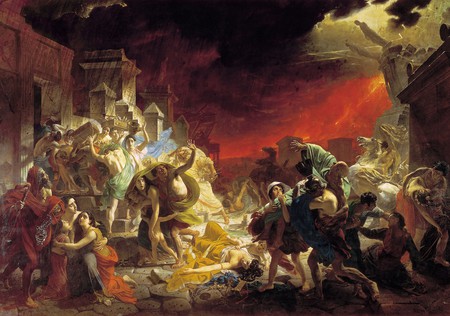 The Ninth Wave by Ivan Aivazovsky

The Ninth Wave is just one of the many works Aivazovsky dedicated to the sea. The painting depicts the morning after a storm, with the first rays of morning light shining on the giant waves. Yet one of the waves, the ninth wave, is about to come crashing down onto the sailors. Survivors of the storm, who are stranded on what remains of the ship, look up to the morning light, hoping the storm has passed. The name of the painting comes from a cultural belief that during the storm, there is a wave that is the largest and most destructive of them all. Many seamen believe that it is the ninth wave. 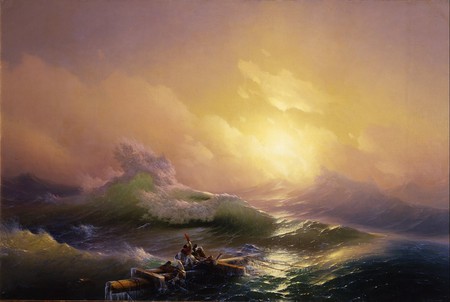 Reply of the Zaporozhian Cossacks by Ilya Repin

The Zaporozhian Cossacks were a rapidly growing political entity within Central Ukraine. They were known for their free-spirited nature and candid attitude. The painting depicts them writing a humorous and insulting reply to the Osman Sultan, who demanded that the Cossacks stop invading the territories of the Osman Empire. Interestingly, many of the depicted characters were drawn from real people, some were famous artists from Repin’s social circle, and others were complete strangers. 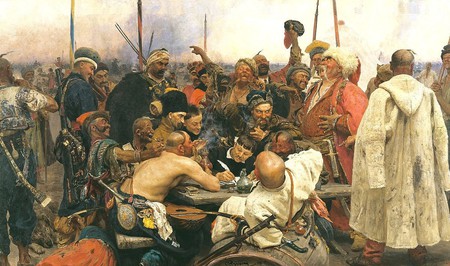 The Portrait of Olga Orlova by Valentin Serov

The Portrait of Olga Orlova is that of a stylish aristocrat. She was the wife of General Orlov. Despite not being blessed with typical beauty, she was called by her contemporaries, ‘one of the most elegant women in St Petersburg’. Serov was commissioned to complete this portrait, which he did over the course of two years. There was much debate over the portrait. Some called it a masterpiece, others criticised it, finding the work sarcastic. The former opinion did hold majority and over the course of time, Orlova decided to donate the painting to the Russian Museum. 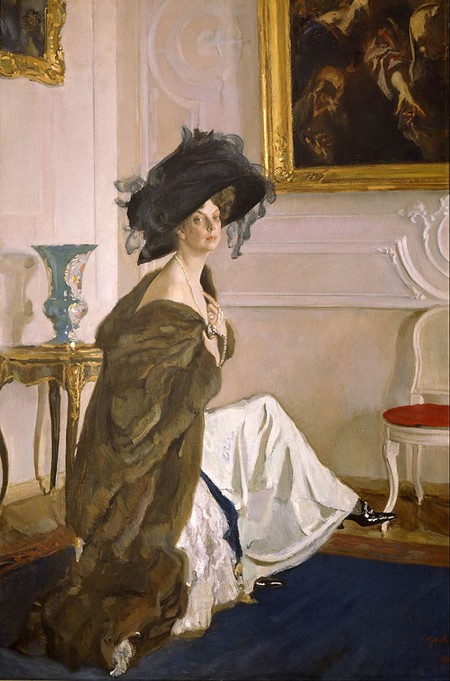 A stunning and piercing work, Vrubel completed this piece only a few years before his death. At the time of completion, Vrubel was suffering from mental illness and was also going blind. Some sources suggested that this painting was inspired by the insane dreams he was having at the time. The result was a haunting angelic being, an image inspired by a poem by Alexander Pushkin ‘The Prophet’. 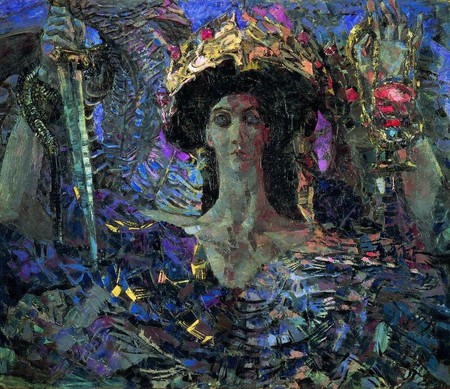 Barge Haulers on the Volga by Ilya Repin

This work was inspired during Repin’s trip to the Volga river, where he saw ordinary men pulling an enormous barge to shore using only their manpower. The painting shows the suffering of these haulers, who, because of their poverty, have no choice but to endure inhumane treatment. The face of every hauler is depicted with exquisite detail, telling a story of their misery and giving a voice to the laborer community. At the time, the painting drew attention to the lack of right for workers. It still passes judgement on society.

Knight at the Crossroads by Viktor Vasnetsov

The works of Vasnetsov were often inspired by Russian folklore. Although the name of the character in this painting is translated as ‘Knight’, in Russian he would be called ‘Vityaz’ – a popular character in old Russian epics. The subject of this painting was taken from the epic of Ilya Muromets. Vityaz is standing at a crossroads in front of a sign that says, ‘if you go straight – you will die’. He is surrounded by the remains of men and horses that attempted to pass. The work was meant to signify the challenging decisions life is never short of and the inevitability of death. 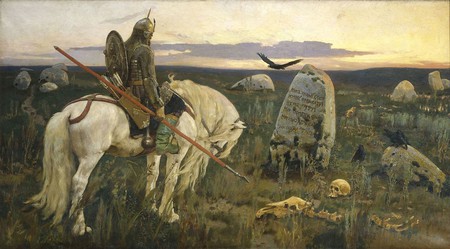 Knight At The Crossroads | © Wikimedia Commons

Full-bodied, healthy women were much loved subjects of Kustodiev. He wanted to show the other side of Russian wealth and beauty, quite opposite from the pale, skinny aristocratic ladies. The surroundings of the merchant’s wife bring a feeling of comfort. Hot tea, abundant fruits and sweets, a gentle cat – all meant to make the viewer feel warm and at home; quite the contrary to what the artist was experiencing in post-revolutionary Russia, as the country was trying to get back on its feet. Kustodiev depicted the life he may have once had and wished to have again. 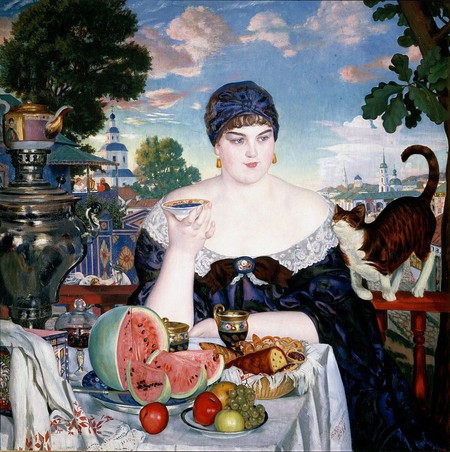 Formal Meeting of the State Council on May 7, 1901 by Ilya Repin

As aptly described in the name of the painting, this work in fact depicts the formal meeting of the state council in May, 1901. The significance of the date was the centennial meeting of the council since its founding in 1801 by tsar Alexander I. At the head of the table is Nicholas II, the last tsar of Russia. The work was a colossal effort for the artist and took him three years to complete. It is a collective portrait of the 81 members of the state council, each member depicted with his unique features in intricate detail.

Formal Session of the State Council on May 7, 1901 | © Wikimedia Commons

Despite the simplicity of the subject, this was one of the most popular paintings by Bryullov. Perhaps the key to success here was the sheer excitement of the young girl, blushing from the heat of the sun and gleaming with the light of her youth. The painting itself conveys warmth and happiness. 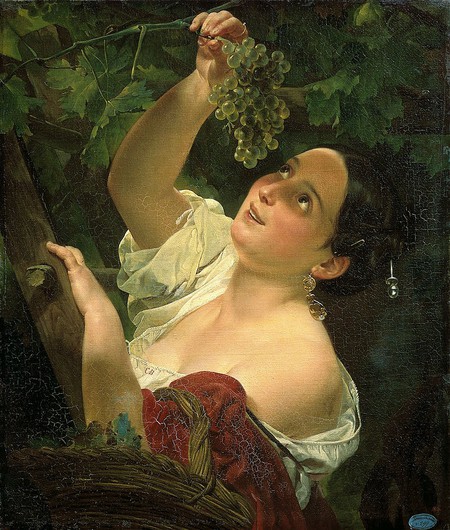 March of Suvorov through the Alps by Vasily Surikov

This painting portrays a famous historic moment in the history of Russian warfare. The scene follows a questionable decision made by general Suvorov to cross the Alps via a dangerous path, given that they had been misinformed about the track they were meant to take. Fighting the harsh winter conditions and slippery paths, the soldiers bravely continued on. The expressions on the faces are all different, some are fearful, some angry, others laughing. On the top left is the figure of Suvorov, encouraging his soldiers to fight their fear and continue on. 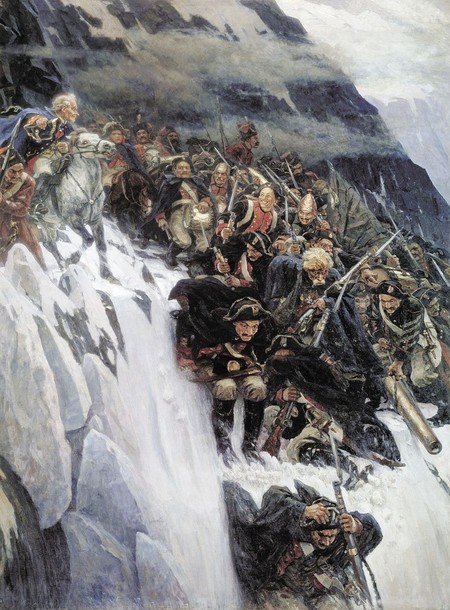 During his career, Petrov-Vodkin worked on murals inside cathedrals. These religious images transcended into his other works. The Mother of God lifts up her hands as if to calm the most anxious hearts and her soothing expression gives a feeling of comfort. Completed in 1915, it is possible that the painting was a reflection of how the artist felt about the First World War. 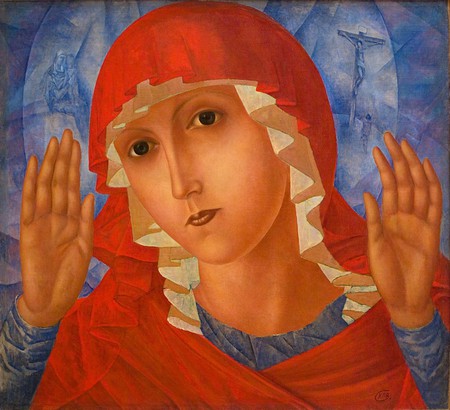 The Mother of God of Tenderness towards Evil Hearts | © Wikimedia Commons

Portrait of Chaliapin by Boris Kustodiev

The portrait of opera star Chaliapin was completed in the final years of Kustodiev’s life, when the painter was very ill. But the painting shows no inclination of the artist’s suffering. In fact, it depicts a joyful winter fair, with spring just around the corner. Chaliapin towers over the small town, where he is about perform. The expensive clothes, rich furs and slightly arrogant expression convey his proud character. 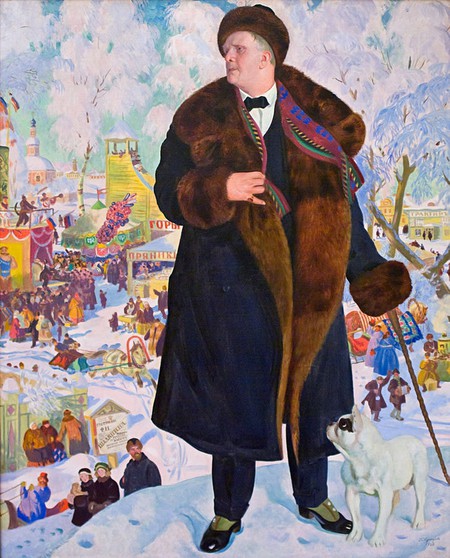 Leo Tolstoy is one of the most significant writers in the history of Russian literature. He was also a close friend of artist Ilya Repin, and thus the subject of quite a number of paintings. In this work, he is painted in his estate, Yasnaya Polyana. Despite his noble birth, Tolstoy is wearing peasant clothes and no shoes – typical attire for the writer, who enjoyed the simple life of a farmer. But such simplicity is only in his clothes, whereas the face of Tolstoy preserves the thoughtfulness and complexity of one of the world’s greatest writers.

Artist Vasily Surikov was renowned for his works that depicted scenes from the past with incredible historic accuracy. This painting was completed in Krasnoyarsk, where the artist was staying at his estate following the death of his wife. To distract himself from his grief, Surikov studied Siberian culture. In this work, he illustrates the winter festivities of the Siberian Kozaks as they playfully destroy a snow fortress. 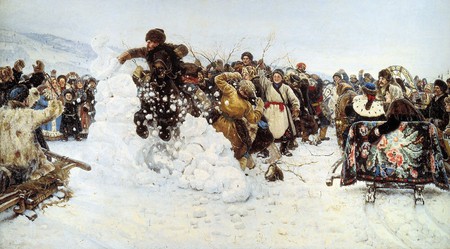 This painting is a fairy-tale description of an underwater world. Repin was commissioned by tsar Alexander II to depict the subject matter of the epic poem Sadko. The poem tells the story of merchant Sadko, who was travelling by sea to sell his goods, but his ships were caught up in a terrible storm. He proceeded to throw gold and valuables into the water to pay the king of the sea, but he soon realised that the king’s asking price was a human life. So Sadko travelled down underwater to reason with the king. 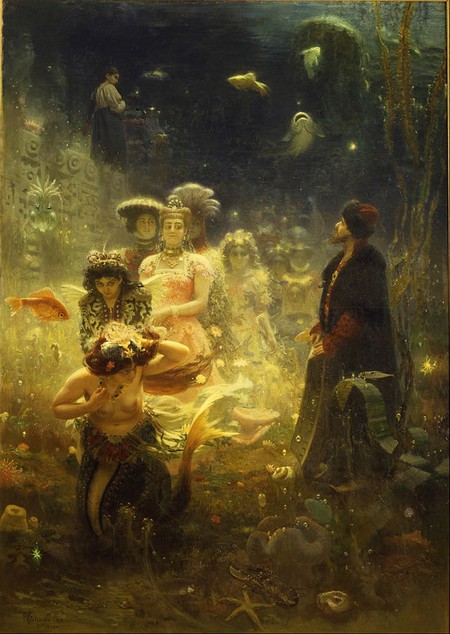 At the Entrance to the Mosque by Vasily Vereshchagin

The works of Vasily Vereshchagin are unique and exotic. The artist travelled with the Russian army to the Balkans, Middle East and Japan to illustrate the lives of the people he encountered, as well as the cultures that were unknown at the time. He sought to depict the cruel nature of war and to show the inequalities of society. This painting is an example of such inequality – the juxtaposition of the richly decorated doors of the mosque and the beggars outside in the street, who are not allowed inside. 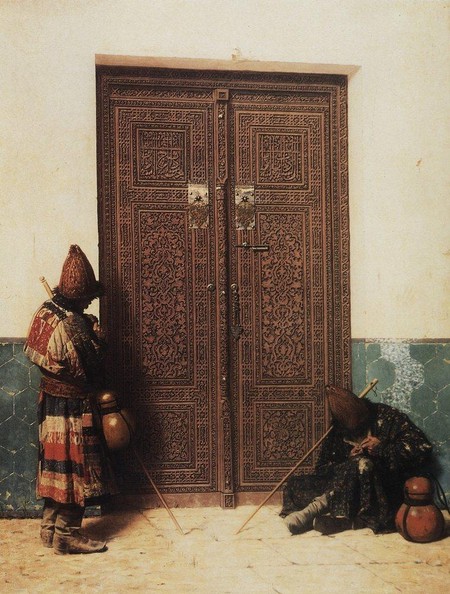 At the Entrance of the Mosque | © Wikimedia Commons

Before the Wedding By Firs Zhuravlev

The unexpected image of a distraught bride before her wedding is a reference to the hard life and duty of Russian women in the nineteenth century. For most women, marriage had nothing to do with love, but rather was a business deal made by parents, especially for financially suffering families. Often the husbands for such brides were old and unattractive rich men. In this painting, the father of the bride is holding an icon, ready to give the newlyweds his blessings, but is confused by her crying. The groom in the background is whispering with the rest of the family, as everyone is surprised at the unacceptable disobedience of the bride. 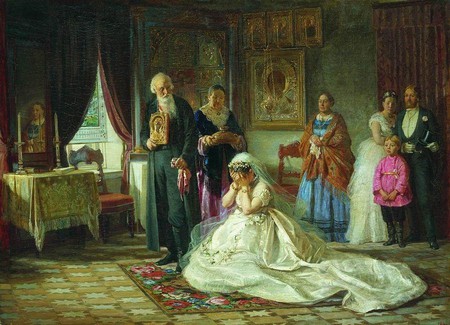 Before the Wedding | © Wikimedia Commons

This painting of a biblical scene brought Repin much recognition and several awards. The story is that of Jairus, a synagogue leader, whose twelve-year-old daughter died. He fell to the feet of Christ asking for help. Christ looks over Jairus’ daughter, preparing to bring her back to life. In the dimly lit background, you can see the girl’s weeping parents. This was one of Repin’s early paintings, and it launched his career. 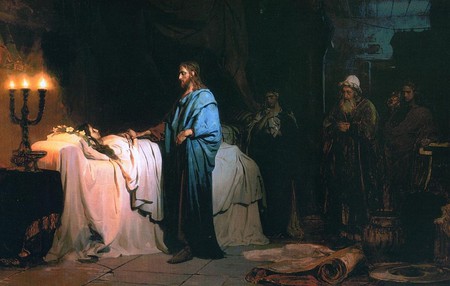 Conquest of Siberia by Yermak by Vasily Surikov

Russia was not always the largest country by territory. It took many expeditions of brave explorers to conquer new territories and to travel into unknown lands. Such an explorer was Yermak Timofeyevich, who travelled to the east and fought against the Siberian khan in the conquest of Siberia. The painting was done with dim colours, but among the grey figures in battle, only Yermak, dressed in bright red, catches the eye. This speaks to his legendary bravery.

Conquest of Siberia by Yermak | © Wikimedia Commons
Give us feedback