Church of the Nativity of the Blessed Virgin Mary in Nizhny Novgorod | © xSpline / WikiCommons
Nizhny Novgorod is not only one of the 2018 FIFA World Cup host cities, it is also a place very much worth visiting in its own right. If you’re headed to Russia to watch the football and happen to find yourself in Nizhny Novgorod, here are the city’s top attractions that you absolutely should not miss.

A kremlin is a fortification at the heart of many old Russian cities. While Moscow’s Kremlin is the most famous one, it is by far not the only kremlin in Russia. Nizhny Novgorod’s Kremlin is where the oldest buildings in the city can be found, as well as many museums, monuments and outdoor exhibitions. It is the most important historic attraction in the city.

Maksim Gorky, one of the Soviet Union’s most prominent writers and five-time Nobel Prize nominee was born in Nizhny Novgorod. He spent his childhood and early youth here. The city was called Gorky in his honour from 1932 to 1990. From 1902 to 1904 he was renting a flat in a building at 19 Semashko Street. The flat, which is preserved the exact same way as when Gorky last saw it, is now transformed into a museum and can be visited. 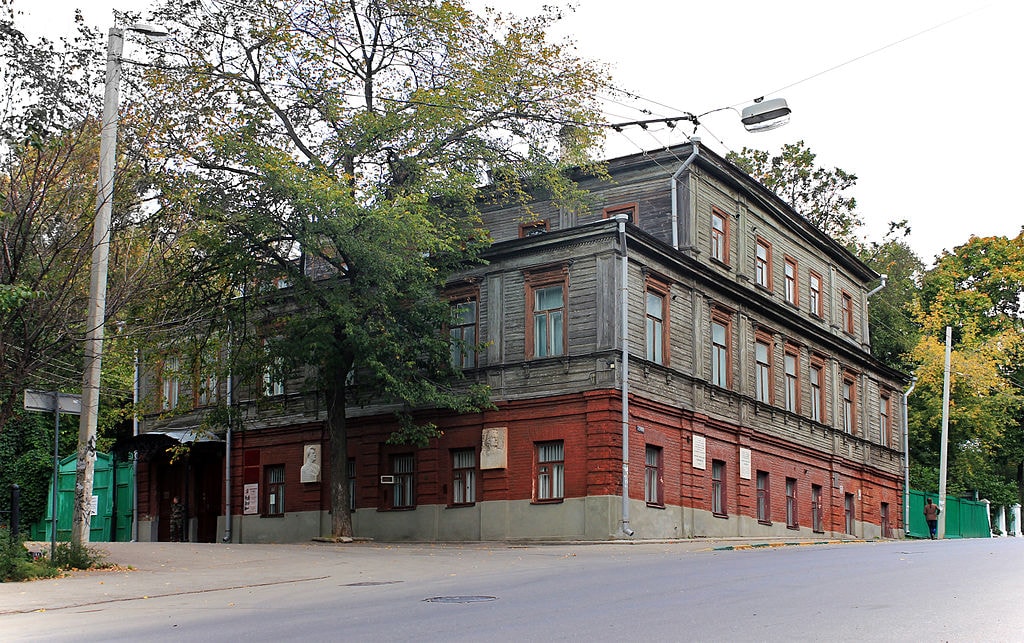 Nizhny Novgorod has always been a quite important municipality in Russia. It has given rise to a few wealthy families and the Rukavyshnikovs’ were one of them. Initially a merchant family, some of its members became artists and local activists. They purchased the building on Verkhnevolzhskaya embankment in the early 19th-century and renovated it to resemble an Italian palazzio. The building was taken away from the family in the Soviet period and housed a few different museums. Now its extravagant interiors are restored to their 19th-century glory and available to visitors. 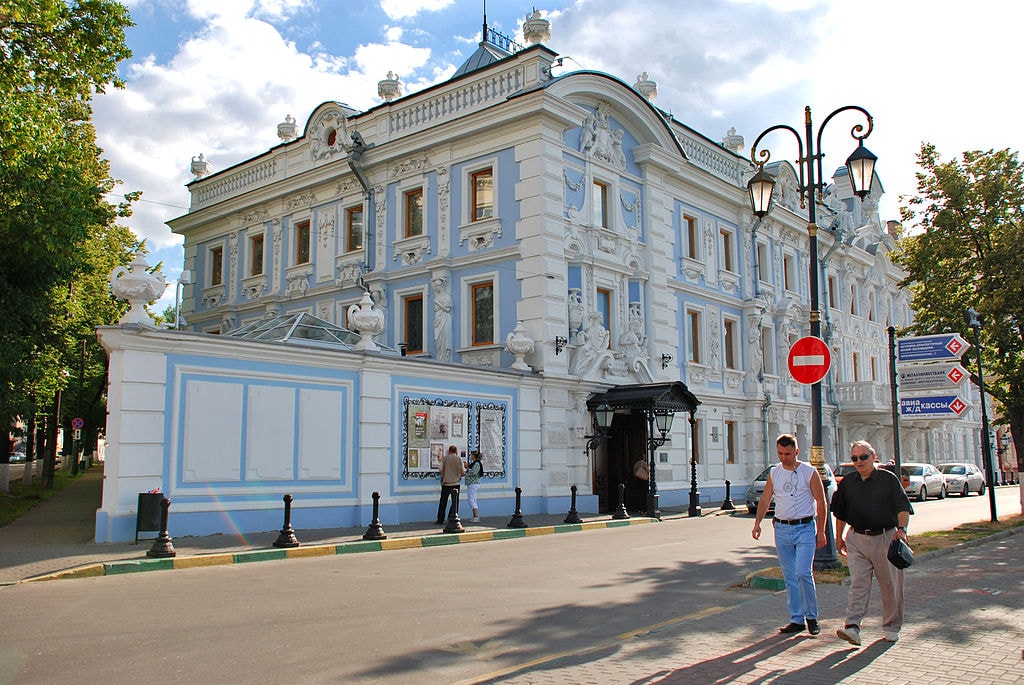 Bolshaya Pokrovskaya is one of the most important, as well as one of the oldest and best-preserved streets in Nizhny Novgorod. The 19th-century streets stretching along both its sides will take you back in time a little. A splendid place for an afternoon walk and a cup of coffee.

Museum of Old Equipment and Tools

Museum
If you’re a fan of old electric equipment of all sorts, this is the place for you. The museum gathered old radio and TV sets, gramophones, telephones, even underwater exploration equipment from various epochs and compiled all of them in one exhibition. It is a museum and a non-museum at the same time, as the visitors can touch all the exhibits (and wear the wearable ones). A perfect place to cultivate the geek in you.
Looks like it's closed Hours or services may be impacted due to Covid-19
More Info
Open In Google Maps
43 Bolshaya Pokrovskaya Street, Nizhnij Novgorod, Nizhegorodskaya oblast', 603000, Russia
+78312151060
Visit website

If you’re looking for a perfect location for a romantic evening stroll, look no more. Fedorovsky Embankment is the best place for a walk in the entire city, with the panorama of Nizhny Novgorod’s oldest parts visible all along it. Whether you’re travelling solo, with a loved one or with a group of friends, you should reserve an evening for a walk on Fedorovsky Embankment. 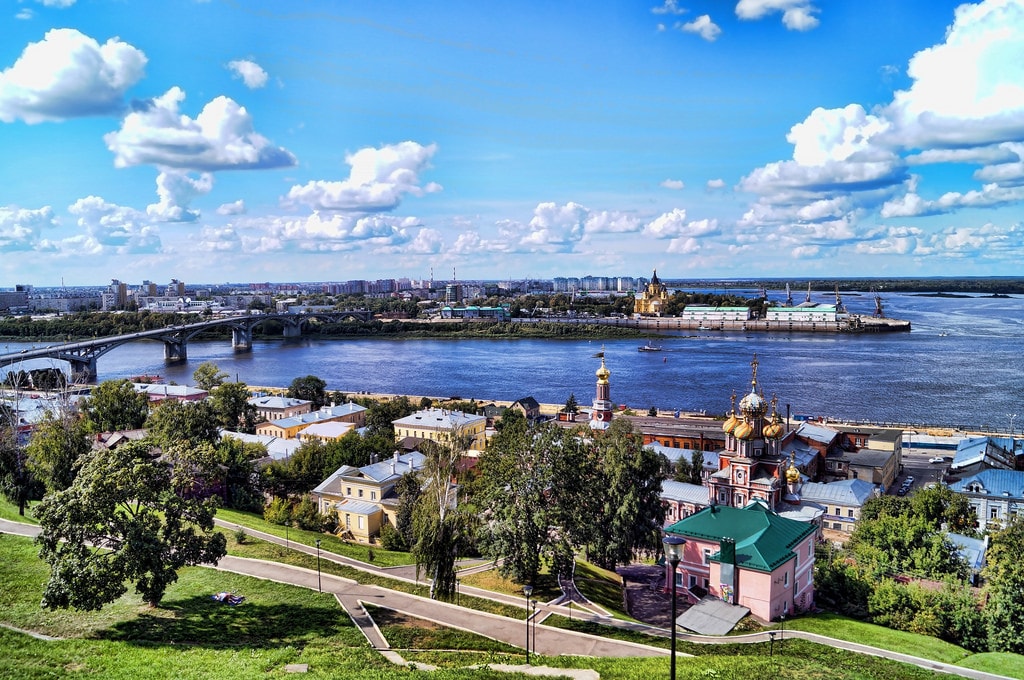 A view from the Fedorovsky Embankment | © Aleksey Trefilov / Flickr

Church of the Nativity of the Blessed Virgin Mary

Church
Church of the Nativity of the Blessed Virgin Mary in Nizhny Novgorod | © xSpline / WikiCommons
It is one of the oldest and most beautiful of Nizhny Novgorod churches. The church was built in the late 17th and early 18th-century by a wealthy merchant, Grigory Stroganoff. It is one of the finest examples of architectonic style named after him and characterised by traditional, five-nave outline and baroque decor. Stroganoff churches look a little bit like fairytale castles. Do not miss the one in Nizhny Novgorod when visiting.
More Info
Open In Google Maps
34 Rozhdestvenskaya Street, Nizhnij Novgorod, Nizhegorodskaya oblast', 603001, Russia
+78314301860
Visit website