The Yekaterinburg Artists Who Use the City as Their Canvas 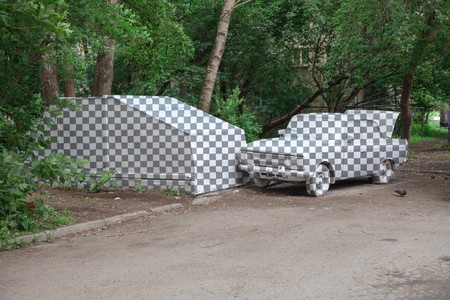 Yekaterinburg’s vibrant cultural scene starts on the streets. Pioneered by bohemian legend Old Man Bukashkin, artists have been brightening up the public spaces of this industrial city for decades. Across installation, mural work and stencilling, here are a few of the region’s most notable artists who take inspiration from Yekaterinburg’s cityscape.

Originally hailing from Yekaterinburg, Timofey Radya has now relocated to Moscow to work off the capital’s urban sprawl. As well as working with the city’s infrastructure and landscape, the artist frequently uses text to convey his point. He has also worked in New York, Norway and France; however, in an interview with The Calvert Journal he asserts that his home country has a culture that works well with street art. He says: ‘Russia is the best place to do street art. Whatever you want you can do here and it will flourish. It’s a magical feeling, being between a rock and a hard place.’

Based in Perm, the Ural’s second city, Zhunev has resisted the appeal of bigger cities to continue to make work in the community of which he is a part. To make work for himself in the small city scene, he experiments with styles and mixes up contemporary and street art. Revisiting his favoured recurring theme of religion, Zhunev transformed an old water tower into a pagan god for STENOGRAFFIA 2017. Inspired by the idea of free-flowing water kept contained in a tank, the project, Idol, is about independent thought outside the institutions that impose behaviour on us. 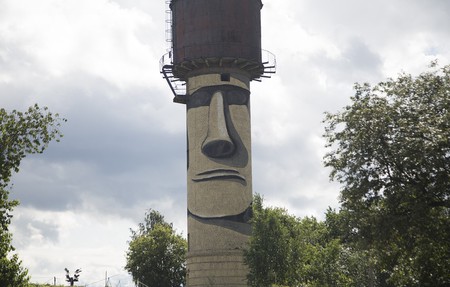 Evgeny Mikhaolovich Malakhin, a former power station supervisor, is one of Yekterinburg’s legends. He played a big role in the city’s art world during the late ’70s through to the ’90s. Better known as Old Man Bukashkin, Makakhin threw in the normality of a regular income and conventional lifestyle to live the life of a bohemian artist. A musician, photographer and visual artist, he brightened up the city’s dead spaces and industrial facade with bright, joyful artworks. Although much of his street art is long gone, the city has done its best to preserve what remains.

Akramov often plays with depth and perspective to create visual illusions that create a sense of space, and often draws on nature to reinvigorate his surroundings. Formerly a manufacturing plant, the UralMash complex is now largely residential. Reflecting the building’s most recent epoch, Akramov has brightened up a wall in one of the courtyards with a stencil of a common houseplant, the Monstera. With the long cold winter in mind, Akramov’s piece plays with light and space, and hopes to sustain the memories of hot summer days once the city is covered with heavy snow. He created another work for STENOGRAFFIA 2017 where he camouflaged a hospital wall under stencilled-on leaves and branches. 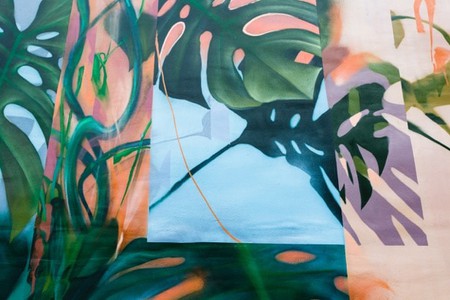 More well-known in Yekaterinburg for his brooding, moody tattoos, Stekolshuk decided to challenge himself with his recent work The Moomins, which was created as part of STENOGRAFFIA 2017. Stepping away from his signature tattoo style, he sought to brighten up a drab electrical power box on Lenina Street, Yekaterinburg’s main drag, with a cheerful stencil of pomegranates. A lover of the biblical fruit himself, pomegranates are currently a recurring theme for the artist. Stekolshuk likes them for their prominence in fairy tales and allegories, as well as for their cheerfulness and colour. And for this project, he thought adding a bit of southern warmth would brighten up the Ural summer. 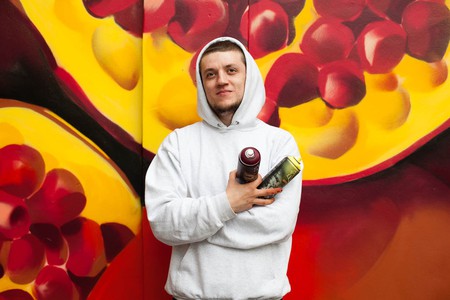 A young artist who works with posters, stencilling and installations, Slava PTRK is making a name for himself beyond Yekaterinburg’s city limits. Currently based between Yekaterinburg and Moscow, he exhibits as a part of festivals and exhibitions throughout Russia, including STENOGRAFFIA, as well as in Europe. His clever works are both large and small. He has animated piping with tiny details and transformed tiles by illustrating over them. He’s also created images across a whole side of a building and a set of stairs, too.

The creative team behind STENOGRAFFIA, a Russia-wide street art festival that is based out of Yekaterinburg, is responsible for bringing some of the most innovative street art projects to the city. The collective has curated and produced works that include stencilling, graffiti, public art and sculptural installations. For the 2017 festival, the team created Braille-Art, in collaboration with Moscow creative agency Possible. As a public art piece created specifically for the visually impaired and blind, it tells the stories of runner Marla Runyan, musician Ray Charles and computer programmer Mikhail Pozhidaev, who all overcame their disabilities to become captains of their industries. 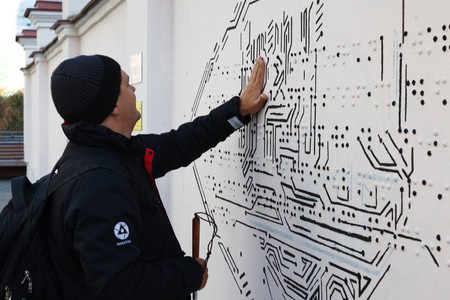 Another artist who is gaining recognition beyond Yekaterinburg, Mozgi originally got into street art through graffiti, but now works more with stencils. Most of his work is driven by current affairs or by the relationship it has with the public space in which it is created. Mozgi has been working as a street artist for over seven years and has created work in cities across Russia, in Europe, and in the post-Soviet states.