The Wonder Of Anton Chekhov: Themes, Symbols And Motifs 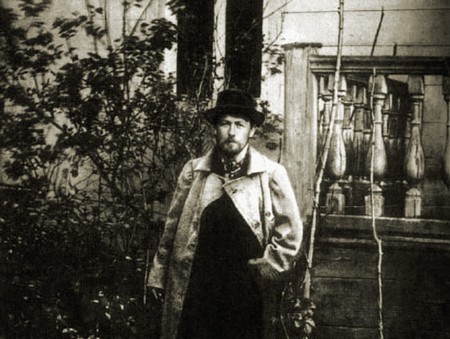 Often described as ambiguous, lyrical, bizarre, humorous, and even haunting, Anton Chekhov’s works cover a broad spectrum of human emotion and spirit. A Chekhovian short story or play points to — but refuses to open — the cupboard where the skeleton is concealed; rather, secrets are slowly revealed. Chekhov’s contributions to the Russian literary canon, and subsequent translations, includes stories and plays that are told and retold. By raising thought-provoking questions through his complex characters as they labor through their life situations, Chekhov’s works span both time and place. Here we explore the themes, motifs and symbols inherent in Chekhov’s works.

Born in 1860, Anton Chekhov grew up in a middle-class family in Taganrog in pre-Revolution Russia. He worked as a doctor as well as a writer to support his family. As he famously quotes in his letter to his editor and friend Alexei Suvorin, ‘Medicine is my lawful wife and literature is my mistress. When I get tired of one I spend the night with the other.’ He was always intrigued by nature and its offerings and spent vast amounts of time in the countryside to put his ideas on paper. Several of his works are inspired by personal life events such as A Dreary Story (1889), inspired by the death of his brother Nikolay, and The Island of Sakhalin (1894), inspired by his 6,500 mile journey to the island of Sakhalin to interview convicts. His struggle with tuberculosis also found expression in his writing through themes and symbols.

Chekhov’s stories are predominantly plagued by disease and untimely deaths. This is not surprising considering the author himself suffered from tuberculosis most of his adult life, leading to his death at the young age of 44. In many of his stories, including, The Grasshopper and The Black Monk, disease is a physical manifestation of a character’s severe psychological distress.

The Grasshopper’s Osip becomes ill due to depression about his wife’s infidelity. In The Black Monk, Kovrin’s physical suffering from tuberculosis finds roots in deeper mental illness. Upon close inspection, you observe that Chekhov here is alluding to a fact more significant than physical or mental disease. He is talking about man’s subservience to natural forces beyond his control and emphasizes humans as transient beings. Alternatively, his focus on disease is also symbolic of a larger depraved society. His Three Sisters is less concerned with the outside threat to civilized standards represented by the protagonist Natasha than with the paradoxical and vulnerability of civilization to weaknesses within itself.

Chekhov’s characters are constantly faced with trying situations that cause them to alter their personal philosophy and world view. The narrator in The Night Before Easter is crushed to discover that Jerome, who shows exemplary promise and resilience, is just an ordinary man. Most characters in his stories deal with frustrated dreams and shattered expectations leading to either a moment of revelation and hope for the future or a complete breakdown of their psyche. Chekhov lived and wrote in a time when social control and authority were rapidly transforming. His works deal with changing ideals and their impact on life of characters. In My Life, Misail renounces all inherited privileges to lead the life of a simple laborer. Change takes place for the worse in The Black Monk, when Yegor’s orchard is handed down to the younger generation and consequently ruined. In most of his stories, Chekhov is relatively equivocal in his treatment of change resulting from the dissolution of old social order. 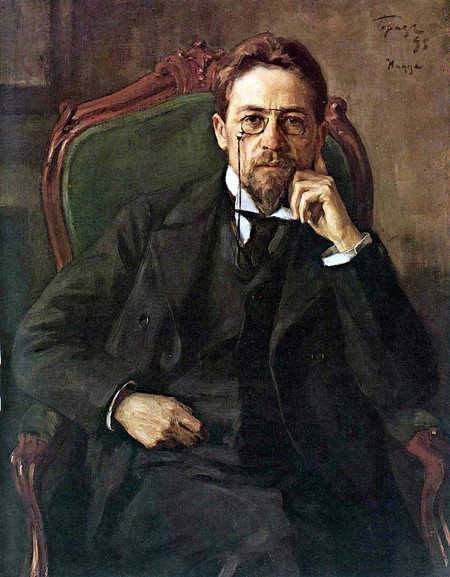 Communication, miscommunication and non-communication are recurring motifs in Chekhov’s stories. This friction in communication occurs mostly in the interaction between the social classes and their interpretation of social inequality. While some of his characters seek to open channels of communication, like Ivan in The Gooseberries; others in My Life or In the Ravine assert that these channels can never be created. The characters unsuccessfully try to voice their views and be understood just like Rabin in Ward No. Six who tries hard to communicate his ideas to Gromov who pays little heed to his words. On the other hands, some characters such as Olga in The Darling have no opinions to express, while Gurov from The Lady And The Dog finds that he is not able to. Broken shreds of communication are characteristic of his stories adding to the character’s dilemma. Many scenes typical of the Chekhovian short story are fundamental to his plays. For instance, a couple left alone in a garden or a room and failing to agree is typical —we find it in Uncle Vanya, The Cherry Orchard, Verochka and Ionych.

A majority of Chekhov’s characters express some sort of emotion towards the landscape that surrounds them. Their reactions may vary ranging from awe and wonder to fear and inspiration depending on their social standing and their relationship with the land. While Gurov is spellbound by the magnificence that surrounds him in The Lady and The Dog, the peasants are less intrigued by the land which bears them fruit. 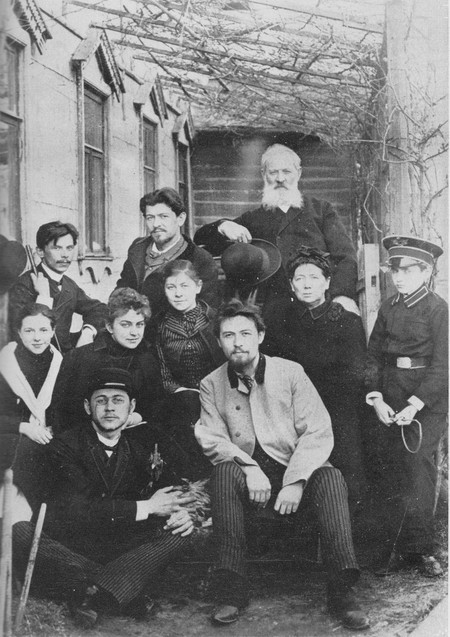 In front of Sadovaya-Kudrinskaya home, 1890.

Chekhov’s symbols spread themselves over a large territory. They are a path to the imagination and to deeper passions, even though they pretend to show only the surface. The night sky holds a special significance to Chekhov’s characters depending on whether they feel wonder and admiration or despair and disillusionment in their life. While the protagonist of The Night Before Easter is awe-struck by the starry night, Lipa from In the Ravine regards the moon and the stars as nature’s indifference to humankind.

The variety of food and drink is symbolic of affluence and social standing. It echoes social inequality and unrest among the characters. While the Tsybukin family in In the Ravine enjoy a feast, the peasants are left to starve. The choices of food and drink also cue the reader to the character’s view of society at large. The titular gooseberries from The Gooseberries symbolize dreams of achieving something. The orchard of cherry trees in The Cherry Orchard symbolizes the past, one that is being flattened by the progress of the new.

In his short life of 44 years, Anton Chekhov made deep impact on Russian literature. Alan Twigg, the chief editor and publisher of the Canadian book review magazine BC Bookworld wrote, ‘one can argue Anton Chekhov is the second-most popular writer on the planet. Only Shakespeare outranks Chekhov in terms of movie adaptations of their work, according to the movie database IMDb. We generally know less about Chekhov than we know about mysterious Shakespeare.‘