The Top Attractions in Saransk, Russia 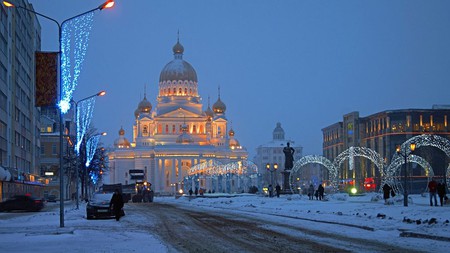 Saransk is a small city some 650 kilometers southeast of Moscow. Even though at the first glance it might seem rather unremarkable, it is, in fact, a very interesting place to visit. Saransk, the capital of the Republic of Mordovia and home to only about 300,000 people, has also become the place of residence of one of Russia’s most famous new citizens, Gérard Depardieu. Here are the most remarkable of the city’s many attractions.

Museum
Facebook
Email
Twitter
Pinterest
Copy link
Share
Map View
The museum is named after Stepan Erzia, a very famous 20th-century Russian sculptor, born in the Republic of Mordovia. This is where the largest collection of his works can be found. The museum also houses a collection of works of other Mordovian artists, such as F. Sychkov and I. Makarov, as well as some 18th- and 19th-century and contemporary Russian and Mordovian art. It was declared to be one of the most important institutions for Mordovian cultural heritage.
Open In Google Maps
61 Kommunisticheskaya Ulitsa, Saransk, Respublika Mordoviya, 430005, Russia
+78342478094
Visit Website
Give us feedback

Initially opened as a branch of the Museum of Visual Arts, this museum is entirely dedicated to the folk culture of the indigenous peoples of the region. Opened only in 1999, it has since played a major role in establishing the national identity among the region’s youth. The exhibition, consisting of artefacts presenting every aspect of indigenous Mordovian life, is housed in a very beautiful building that is a monument of late 19th-century architecture in itself.

Museum of War and Work Efforts

A fairly new and very unusual museum, it is dedicated to the soldiers from the region who fought and died in the armed conflicts in which Russia was involved in the 20th century: the Great Patriotic War (a term used in Russia to denote a portion of the Second World War, from 1941 to 1945), the Afghan War, and the Chechen Wars. What makes the museum so unusual is the building in which it is located. The building’s shape resembles the borders of the Republic of Mordovia, and its roof is meant to look like a kokoshnik – a traditional local female hat. The orange and black façade is reminiscent of the ribbon of St.George, a Russian symbol of military courage. 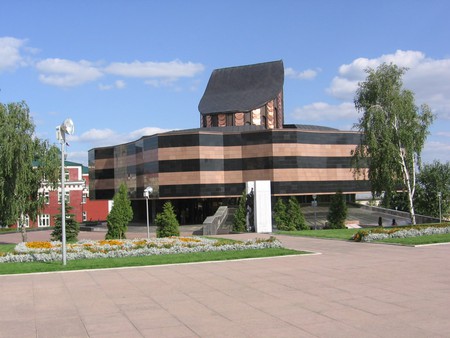 Ever since the Scorpions felt the famous wind of change, it is not a secret that Russians are fond of parks. Saransk is no exception: the whole city is very green and patched with smaller and bigger rest areas. Pushkin’s Park, however, is the most remarkable of them. It is a perfect place to spend a Sunday afternoon, have a small sweet treat, and watch local families walking around, playing with their children, and hanging out together. 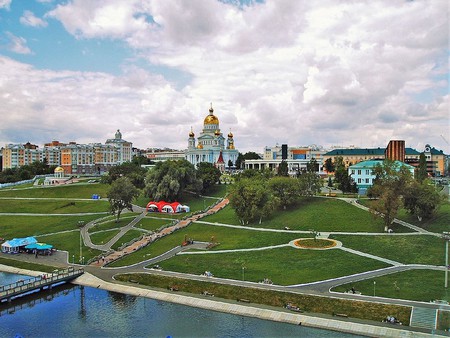 The early 21st century saw a revival of Orthodox Christianity in Russia. In 2001, Mordovia became a separate diocese. The existing churches turned out to be too small to meet the increasing needs, and a new church, the Cathedral of St. Fyodor Ushakov was built. The construction was completed in 2006, and the funds were collected from local private sponsors. The Church, the design of which was inspired by the French empire, can fit up to 3,000 people. It is an excellent representation of everything that modern Russian Orthodoxy seems to be.

Church of St. John the Apostle

Erected in 1693, this is the oldest building in Mordovia. It is also a federal monument of architecture. The church functioned as the cathedral of the Mordovia diocese until the completion of the Cathedral of St. Fyodor Ushakov.

Gérard Depardieu, after his famous citizenship swap, chose Saransk to be his new hometown. As a gift to his new community, he renovated an old cinema and established a cultural centre named after him. The aims of the foundation include ‘screening spiritual, deeply ethical, tender, meaningful Russian films and the best foreign films‘. The cinema is an item of curiosity as well as a local attraction; it is definitely a place to see, as it represents a lot of what modern Russia has become.