10 Essential Attractions to See in Moscow 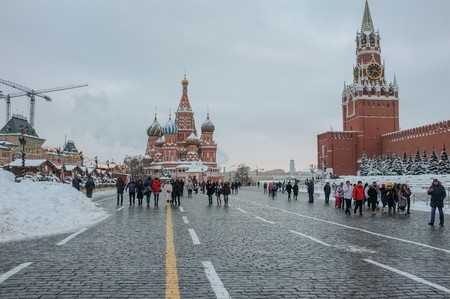 This European capital of culture boasts of some of the world’s best museums, galleries, and monuments. Russia‘s capital fascinates with the marks of its turbulent past, artistic atmosphere and dazzling architecture. Come and fall in love with the best of Russia by visiting Moscow‘s finest gems.

Take a ride on the Moscow metro

For budget travelers, an excursion on the Moscow metro is the ideal way to soak up the best of the city, without breaking the bank. As each station’s ornate decoration is specially designed to reflect the station’s individual characteristics, a ride on the metro showcases the city’s wonderful diversity. Intricate mosaics, gleaming chandeliers, marble, and statues, are just some of the sights to see, as well as illustrations from Dostoevsky novels in the station named in the infamous author’s honor. The metro provides a compelling insight into Socialist history, with the numerous Soviet monuments adorning its interiors. As one of the world’s deepest metro lines, with 196 stations and over 300km of track, there need be no end to your underground adventures. 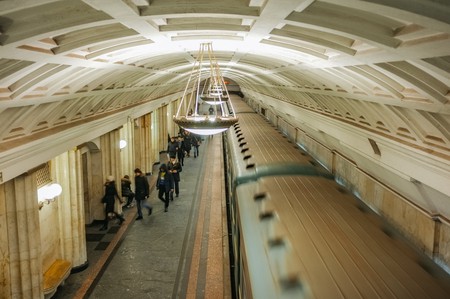 Practically a rite of passage for any tourist seeking the true ‘Russian’ experience: join the locals for some much needed relaxation in one of the city’s notorious banyas (Russian saunas). A favorite Russian pastime, taking a trip to the banya is not merely a means to cleanliness but also a social event. Come along and enjoy the local gossip, friendly banter, and deep philosophical discussions, batted back and forth amid the hot and sticky steam of Russia’s many banyas. Not forgetting your slippers, the eternally attractive banya hat, a bottle of champagne, and light picnic to share with friends post-banya of course! One of the city’s oldest banya institutions is Ryevskiye Banyi. 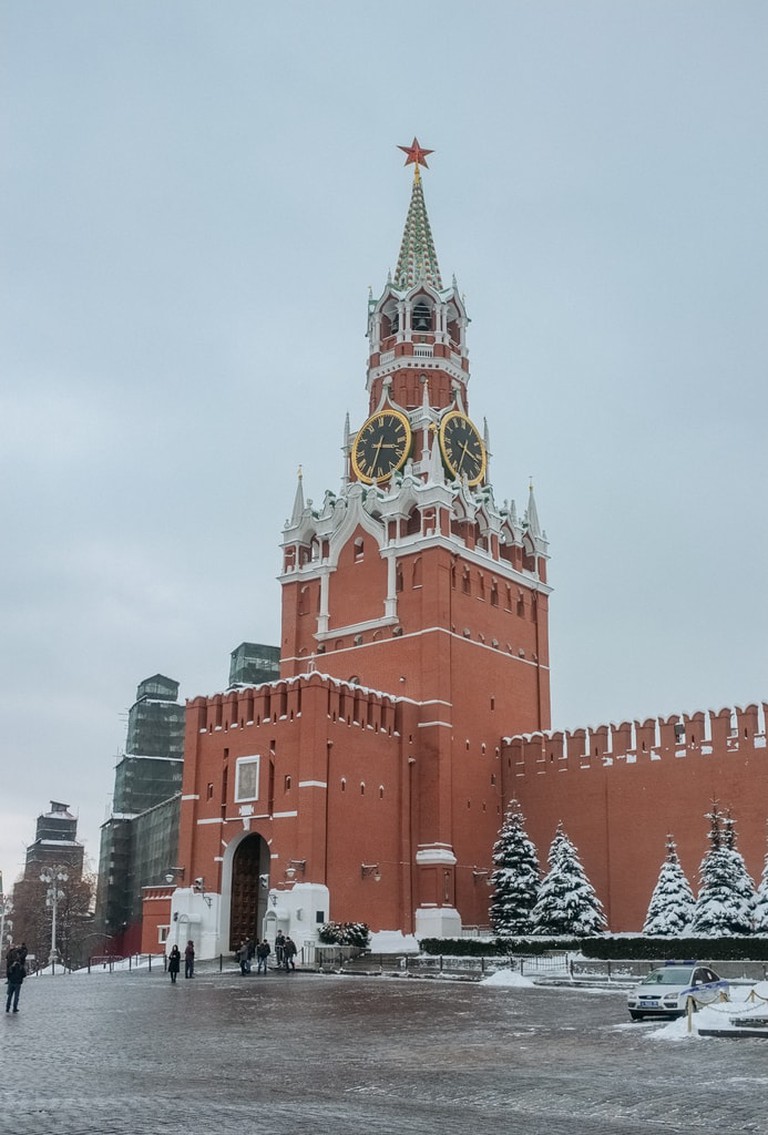 Julia Shinkareva / | © Culture Trip
Book Now
A snapshot into Russia’s imperial past, a visit to Moscow’s Kremlin is undoubtedly a historical highlight. The Kremlin paints a detailed portrait of Russia’s tsarist influence while the grandeur of the Kremlin Palaces, the nation’s current seat of power, provides insight into Russia’s modern-day ruling. Visit the Tsar Bell, the largest bell ever created, and enjoy a stunning panorama over the whole city from the bell tower, plus be amazed by the Tsar’s treasures in the Diamond Fund.
Open In Google Maps
Central Administrative Okrug Moscow, 103132, Russia
+74956970349
Visit Website
Give us feedback 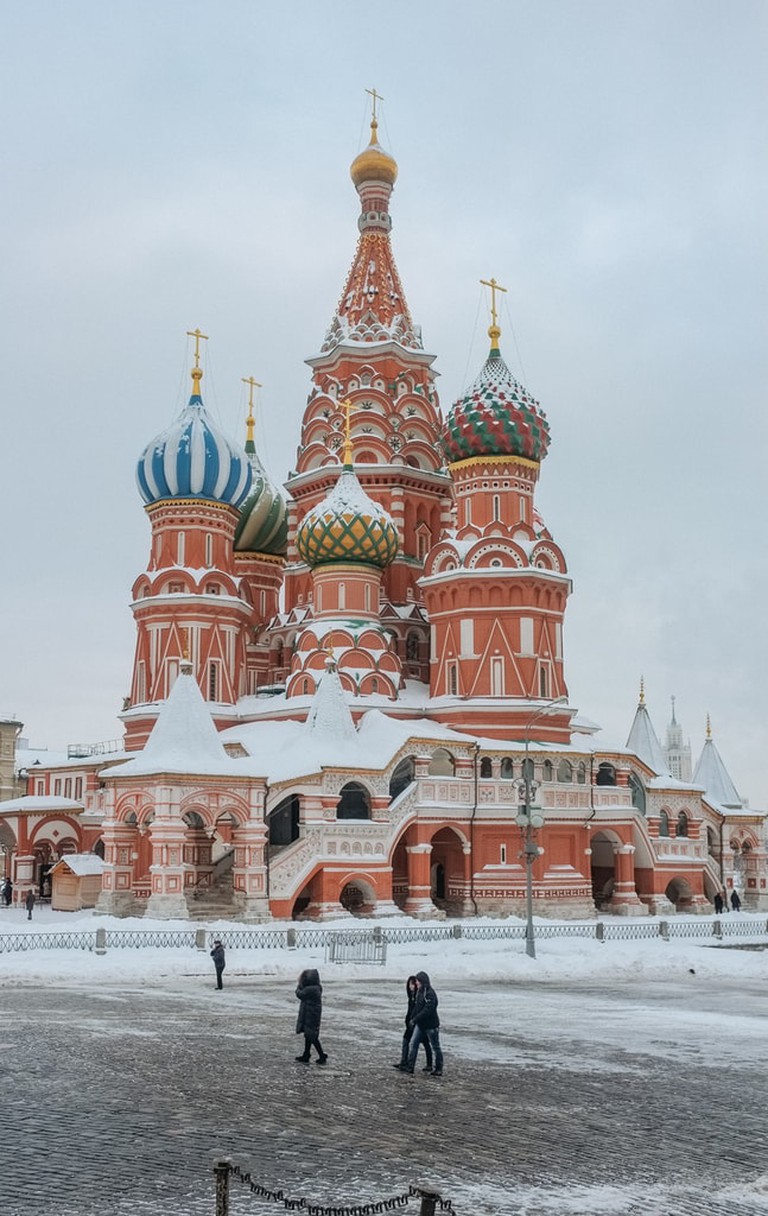 Julia Shinkareva / | © Culture Trip
Book Now
No trip to Moscow is complete without a trip to these two Russian landmarks. Soak up the archetypal view of Russia’s capital with the towering crimson Kremlin walls and glistening rainbow domes of St Basil’s cathedral. Red Square, at the heart of the city, is a buzzing hub of social activity, and regularly home to markets, festivals, and celebrations. Alternatively, while you’re here, take a more sobering trip to Lenin’s Mausoleum to inspect the preserved body of Vladimir Lenin, Russia’s first Socialist leader and a monumental icon of history.
Open In Google Maps
Krasnaya ploshad, Tsentralnyy administrativnyy okrug Moskva, 109012, Russia
Give us feedback 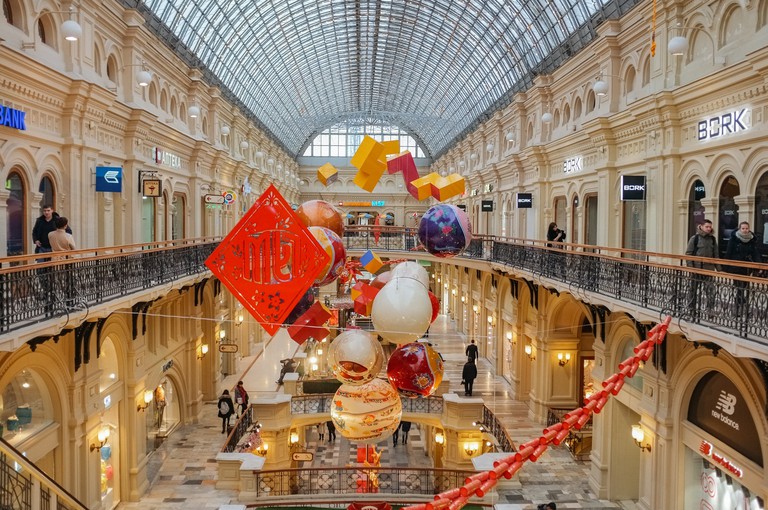 Book Now
GUM is a Moscow institution and a hotspot favored by Russia’s chicest residents. This exclusive department store boasts designer boutiques, charming cafes, and some of the most lavish Christmas decorations in the whole city. A monumental Christmas tree and outdoor ice rink stand outside for much of the festive season. We recommend coming to admire the building’s spectacular facade at night when it is illuminated by thousands of glistening lights. Situated in the heart of Moscow, GUM’s location makes it a highly convenient place to find shelter from the biting Russian winter weather.
Open In Google Maps
3 Krasnaya ploshad, Tsentralnyy administrativnyy okrug Moskva, 109012, Russia
+74957884343
Visit Website
Give us feedback 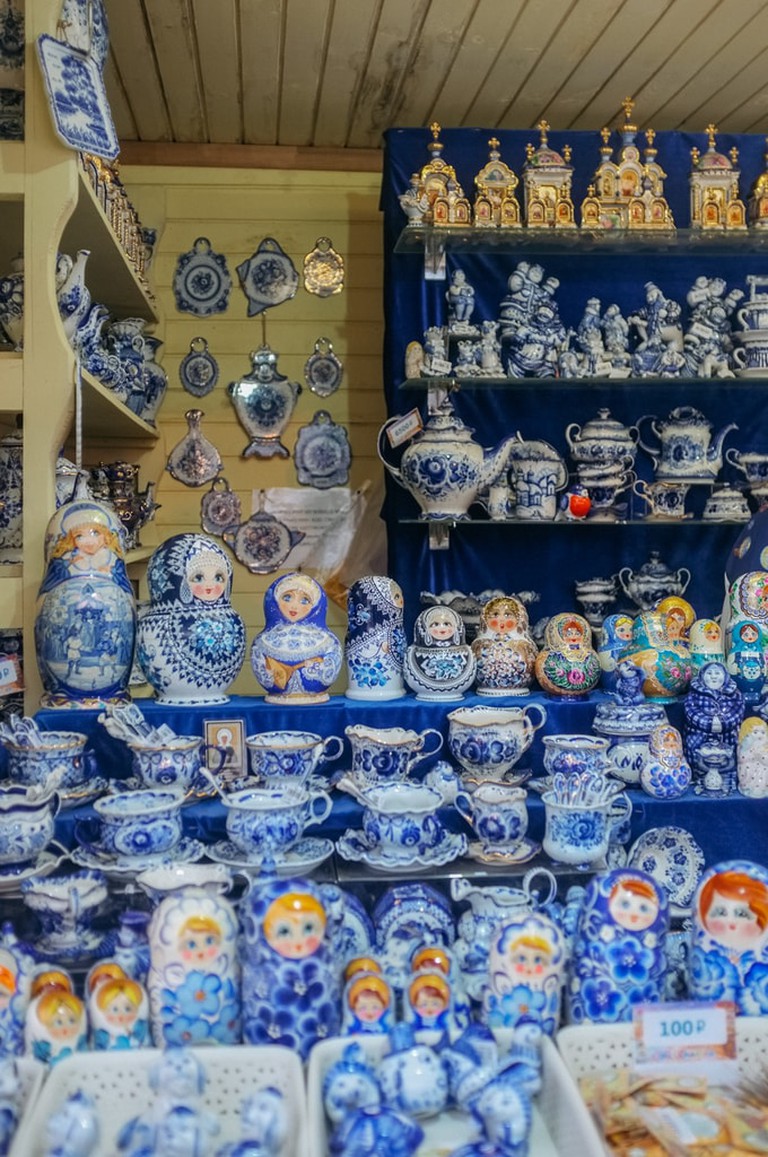 Spend time browsing intricate memorabilia at the market | Julia Shinkareva / © Culture Trip
Book Now
For those on a slightly more limited budget, ditch window shopping at the exclusive GUM and take a foray into the madly bustling world of Izmailovsky, Russia’s best flea market. Delve into the bargains, rifle through the artisan crafts, admire the local handiwork and be tempted by the silky smooth traditional fur hats. Expect walls of matryoshki dolls, fascinating Soviet memorabilia, and glittering hand-crafted jewelry. Head up to one of Izmailovsky market‘s cafes for a warming mulled wine before continuing your shopping spree.
Open In Google Maps
73Жс5 Serebryano-Vinogradnyy Proyezd, Vostochnyy administrativnyy okrug Moskva, 105122, Russia
+79035757017
Give us feedback

Building, Museum
Facebook
Email
Twitter
Pinterest
Copy link
Share
Map View
Widely regarded as the city’s finest gallery, this is Moscow’s largest museum of European art. This building itself is a sight to behold with its grand columns and classically styled facade, but the views upon entering are even more staggering. The Pushkin Museum‘s collection of Impressionist and post-Impressionist art is particularly impressive and is comprised of works by Picasso, Monet, Van Gogh, Gauguin, and Matisse. There is also a display of wonderfully preserved statues and artifacts from classical times. Visitors won’t have trouble getting lost in this haven of art and spending hours perusing the masterpieces on display.
Open In Google Maps
12 ulitsa Volkhonka, Tsentralnyy administrativnyy okrug Moskva, 119019, Russia
+74956979578
Visit Website
Give us feedback
Book Now 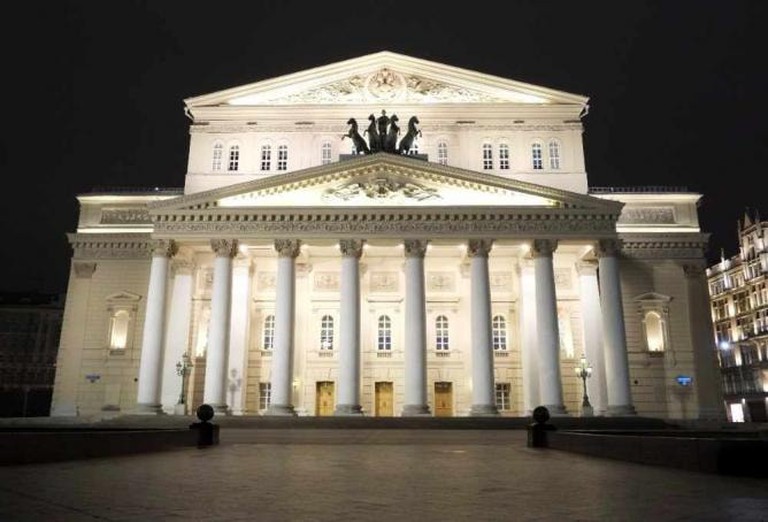 The Bolshoi Theatre | © Paul Nuttall/Flickr
Book Now
Dominating the skyline of Moscow’s famous Theatre Square, this Russian institution attracts visitors from all four corners of the globe. The building that stands on the square today was established in 1856 and is considered an emblem of Russia thanks to the dramatic innovation and contribution to the creative arts that has occurred inside its walls. Having hosted some of the finest performers in all of history, the Bolshoi Theater is where you can watch the best of today’s theatre, opera, and, of course, ballet companies. Tickets are highly sought after and tend to sell out months in advance so many simply come to admire the building’s breathtaking exterior.
Open In Google Maps
1 Theatre Square, Tsentralnyy administrativnyy okrug Moskva, 125009, Russia
+74954555555
Visit Website
Give us feedback

The Cathedral of Christ the Saviour 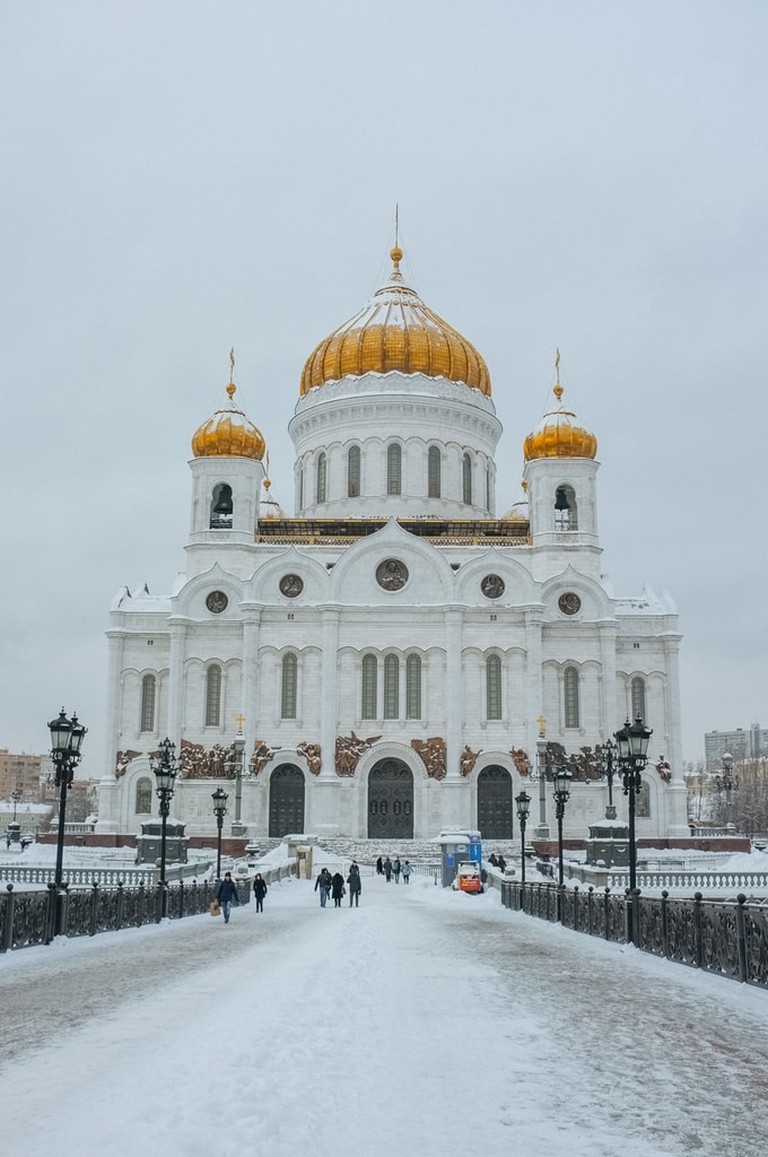 Julia Shinkareva / | © Culture Trip
Book Now
Once the site of a Soviet swimming pool, this towering landmark dominates Moscow’s modern day skyline. The tallest Orthodox Christian church in the world, the Cathedral of Christ the Saviour‘s riverside location and glistening golden dome make it a striking sight. Russia’s Soviet government intended to blow the church to pieces to make way for a proposed Palace of Soviets. However, these plans were abandoned in favour of a giant outdoor pool, the world’s largest, kept at a temperature of 27°C all year round. But the thick fog constantly surrounding the pool, and the number of grisly deaths that occurred in it, earned the pool a gruesome reputation. Nowadays, visitors come to appreciate the fine architecture and intriguing history while getting a glimpse of Russian Orthodox life. The church’s interior was also the site of Russian punk band Pussy Riot’s 2012 protest, which resulted in their controversial arrest.
Open In Google Maps
15 ulitsa Volkhonka, Tsentralnyy administrativnyy okrug Moskva, 119019, Russia
+74956371276
Visit Website
Give us feedback
Give us feedback