The Subversive Style of the Stilyagi, the Original Hipsters of Russia 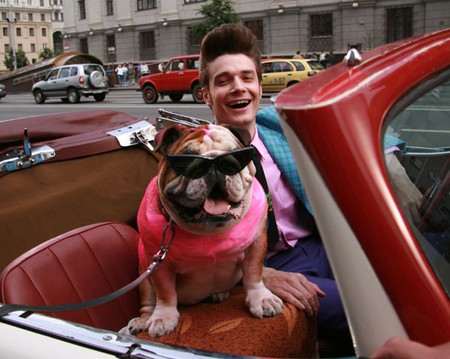 Born out of the post-WWII Soviet Union, the stilyagi were Russia’s first hipsters and devout consumers of banned Western music and fashion. Driven by a lust for youth culture beyond the Iron Curtain, they broke away from the monolithic Soviet society and oppressive government with their insatiable desire to look good and dance.

Despite the colossal loss of life that Soviet Russia suffered during the Great Patriotic War (WWII), they emerged victorious when it finally came to an end. The wartime hardships inflicted on civilians stopped, and returning soldiers received a hero’s welcome for their efforts in savage battles.

Soldiers brought back stories of the outside world and foreign goods. Music, gramophones, clothing, magazines and other morsels of Western culture washed into the USSR. In the triumphant few years immediately after WWII, Soviets welcomed in their promising new chapter with American jazz and other new sounds.

And then the Cold War enveloped the country. The government imposed a ban on Western culture, and the music, cinema, dancing and clothing disappeared because the regime argued they were part of an American plot to bring down the Soviet Union. Nonetheless, a handful of young Soviets chose to defy the censorship.

These cool kids were hooked on the new music and fashion to hit Soviet Russia and were not going to give it up. They were given the name stilyagi, from the Russian word for style. Although it was supposed to be an insult, style was central to the stilyagi. A little bit rockabilly, a little bit preppy and a little bit English teddy boy, the stilyagi stuck out from the Soviet masses with their bright flair. The men sported quiffs and pencil moustaches and wore thick rubber-soled shoes, tight trousers and bright, gaudy shirts and ties. Although there were far fewer women caught up in the scene, they were equally as bright and equally well styled. Aside from a love of Western style, these kids were bonded together through a desire to look good, dance and enjoy themselves, despite living in difficult times.

They danced the ‘unrecommended’ dances of the tango and foxtrot, as well as the jitterbug and lindy hop. Their favourite dances were the unfamiliar dances of the Canadian, the Atomic and a type of boogie called the Triple Hamburg. When rock and roll seeped in across state borders, the stilyagi danced to that, too. They danced in homes, in restaurants, at parties and in cafés – wherever they could.

Stilyagi were the law-breaking hipster counterculture of 1950's/60's USSR. Taking their cues from the West then spicing it up with their own special brand of rebellion🕶 . . . #bonemusic #inspiration #stilyagi #counterculture #rockandroll #shortfilm #indiefilm #womeninfilm #resist #theundergroundiseverywhere

It all changed for the stilyagi in 1957 when the USSR opened their borders to host the World Festival of Youth and Students in Moscow. Young foreign students streamed into the capital, including Americans and Western Europeans. For the first time, the stilyagi had the opportunity to compare themselves to whom they modelled themselves from, and they saw they were behind current Western fashion.

By the end of the ’50s, there were few true stilyagi left. The movement had transitioned into the mainstream, and the founding hipsters discovered new interests. The remaining original crew had separated into two further subcultures, which were defined by their differing musical tastes that had evolved on from the original love of jazz.

Many people dismissed these kids as irrelevant bits of fluff. However, despite being apolitical, particularly in comparison to the reactionary anti-Stalinists before them, the stilyagi’s disregard for Soviet ideals and flagrant adoration of Western culture undermined the regime’s pro-Soviet, anti-West stance. The stilyagi also left their mark on the USSR’s infamous black market through the manufacturing of bone music and influenced waves of youth subcultures to come such as the bitlomany, hippies and the Russian rockers, which all chipped away at the Soviet establishment in their own way.

Subkultura, Stories of Youth and Resistance in Russia, by Artemy Troitsky, is available through the New Social and HOME.