The Russian Avant-Garde From Cubism To Surrealism 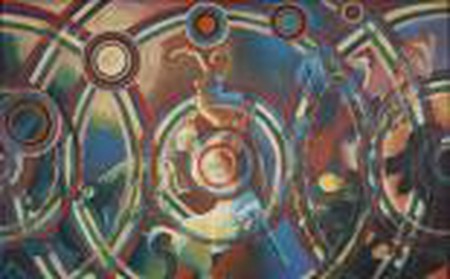 Dazzling variety is the defining characteristic of Vladimir Baranov-Rossiné’s work. The Russian painter explored a variety of styles throughout his life, rendering his oeuvre into an avant-garde kaleidoscope of colours and perspectives. Costanza Beltrami takes a closer look at Baranov-Rossiné’s paintings at From Cubism to Surrealism, an exhibition organised by the St Petersburg Gallery in London. 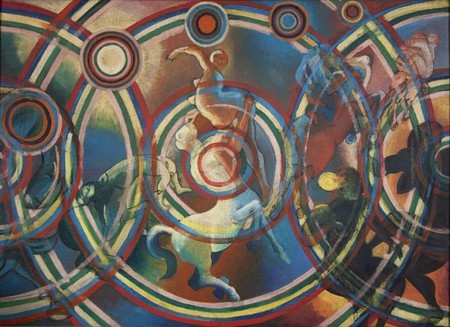 If every ground-floor window on Cork Street is alive with the lure of artworks, St Petersburg Gallery’s is ablaze with a kaleidoscope of colours and styles. Dazzling variety is indeed one’s first impression of Wladimir Baranov Rossiné’s work, an impression strengthened by the exhibition’s title, From Cubism to Surrealism.

This all-embracing outlook is certainly justified by the relative novelty of the artist’s work on the London art scene. In fact, this is only the second London exhibition to present Baranov-Rossiné’s oeuvre on its own, without reducing it to a footnote to the work of some better-known artist or editing it to fit within some carefully constructed ‘-ism,’ as at Fischer Gallery in 1973. Instead, St Peterburg Gallery’s exhibition dwells on the variety of styles explored by the artist throughout his life, just like its predecessor, the Rutland Gallery’s show of 1970.

Baranov-Rossiné was born in Odessa in 1888, but moved to St Peterburg to complete his studies at the Academy. Staunchly neoclassical in its curriculum, this Academy was hardly a forward-looking institution. Yet at the turn of the century it became home to World of Art, a group of artists who aimed to promote cultural exchange between Russia and western Europe. Discussing and exhibiting foreign artworks, the group popularised the Symbolist tendencies of turn-of-the-century French painting, greatly fostering their imitation in Russia. Influenced by Symbolist ideals, World of Art sought the union of painting, music and literature in a ‘total’ work of art, thus influencing the development of Russian theatre and ballet. 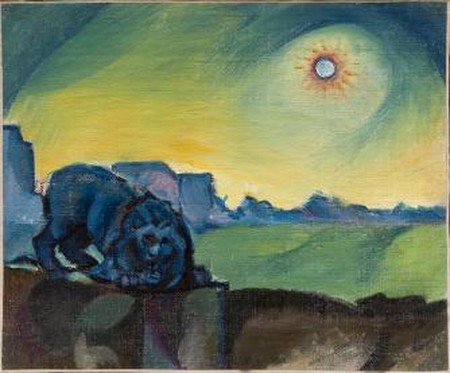 Born in the following generation, Baranov-Rossiné was not directly part of the World of Artcircle, and yet he was greatly influenced by it in his personal connection to France and French painting. Depicting a sphinx, a favourite creature of the Symbolists but also the majestic adornment of St Petersburg Academy’s neoclassical façade, Rossiné’s early painting ‘The Sphinx of St Petersburg’ (1909)is a testament to the weight of this influence.

From the realistic style of ‘Mansions’(1907), to the Cézannesque landscape ‘Red Roof’(1910) via the impressionistic touches of ‘Barges on the Dnieper’ (1907) and the green shadows of ‘Nude’(1909), Baranov-Rossiné’s early paintings seem to chronicle the discovery of the French avant-garde in Russia.

Contradicting the all-embracing emphasis of its title, the exhibition is in fact narrowly focused on the period between 1910 and 1915, when the artist moved to Paris. The exhibition opens with two major works corresponding to the beginning of this period: on one side of the entrance hangs ‘Still Life with a Shell’ (1910), its tilted tabletop, scattered apples and potted flower reminiscent of Cézanne’s ‘Still Life with Apples and a Pot of Primroses’ (ca. 1890, Metropolitan Museum, New York); on the other side, there is ‘Maternity’ (1910), whose cubist decomposition and muted colours seem inspired by Picasso and Braque’s contemporary experiments with analytical cubism. 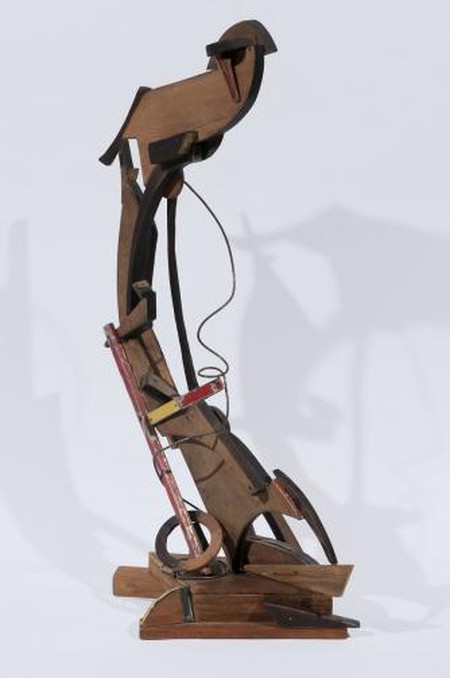 In-between the two paintings is ‘Polytechnical Sculpture’(1915), an abstract piece composed of disparate fragments of wood and metal. Located well in sight of the gallery’s window, this sculpture is clearly presented a highpoint in the artist’s oeuvre. Along with the larger pieces ‘Rhythm’(1913)and ‘Dance’(1914), also included in the exhibition, this is one of Baranov-Rossiné only five extant sculptures. Realised in a sequence opposite to that of display, the sculptures show Baranov-Rossiné experimenting with three-dimensionality and unconventional sculptural materials, such as polychrome metal, cardboard and even crushed eggshells, probably following the example of Picasso’s collages.

These sculptures are the artist’s most innovative works, acting as a ‘catalyst for a new era’ unsatisfied with traditional forms and therefore proving ‘crucial’ for the development of Cubo-Futurism. And yet, Baranov-Rossiné was definitely not the only artist influenced by the cubists’ experiments. Vladimir Tatlin, for example, began to create ‘painting reliefs’ following his revelatory meeting with Picasso in 1913. In these works, Tatlin broke away from figuration, introducing space as pictorial element and carefully exploring each material’s characteristic texture. 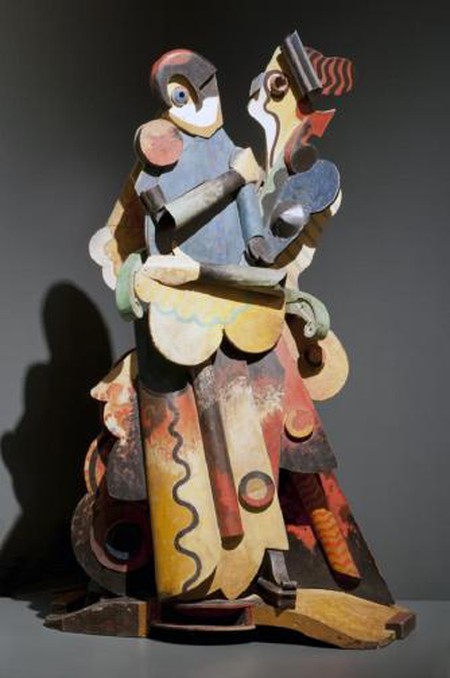 Resulting in such muted multimedia assemblages as ‘Corner Counter-relief’ (1914, Thyssen-Bornemisza Museum, Madrid), Tatlin’s artistic research seems superficially similar to Baranov-Rossiné’s, especially when the bare wood and metal forms of ‘Polytechnical Sculpture’ are considered in isolation. The priority given to this sculpture over the more eye-catching ‘Rhythm’ and ‘Dance’is perhaps an attempt to capitalise on such similarity. The comparison is misleading, however, for Tatlin would hardly have appreciated the other two sculptures. Characterised by brilliant colours and shallow relief, these are closely reminiscent of the work of another Ukrainian émigré, Alexandr Archipenko, Baranov-Rossiné’s neighbour at the Parisian artist colony La Ruche. In particular, the sculptures of Archipenko and Baranov-Rossiné manifest a common interest for the worlds of theatre and dance, perhaps a result of the extraordinary success of Diaghilev’s ballets russes season in 1909.

Divided in its elements of ‘Rhythm’ and ‘Dance’by the sculptures, music is visibly important in other works of the artist’s first Parisian period, notably the series of studies Nymphs and Centaurs. Although these paintings allegedly show scenes of mythological rape, the interlocked poses of male and female creatures evoke a grand jeté lift. Taking predominance over the figures, a pattern of coloured circles points to the influence of Orphism, a movement interested in the similarities between ‘pure painting’ and music which developed around Baranov-Rossiné’s close friends Robert and Sonia Delaunay. Creating a rich and brilliant pattern, the three paintings’ Orphic motives result in an all-over effect reminiscent of backcloth designs. 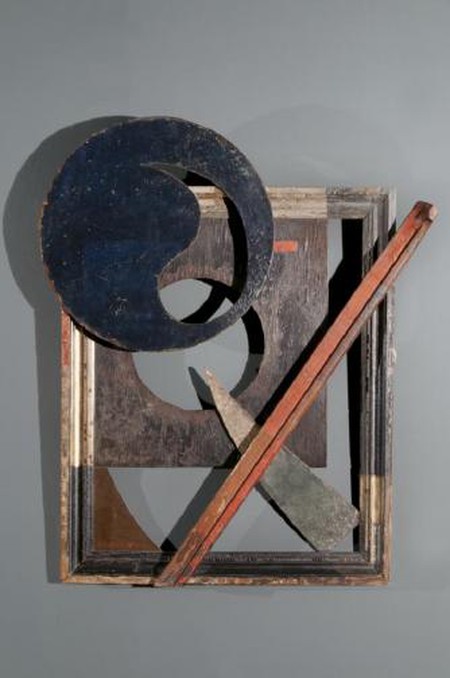 Whilst these Orphic paintings show Baranov-Rossiné’s full integration in the Parisian émigré circles, ‘Counter Relief’(1917), one of the last paintings hung on the gallery’s ground floor, marks the artist’ return to Russia after the Revolution of 1917. Consisting of wooden shapes attached to the front of an empty frame, ‘Counter Relief’ embodies a clear rejection of the illusionistic picture plane traditionally associated with figurative easel painting. Directly borrowing its title from Tatlin, this work reveals Baranov-Rossiné’s willingness to embrace a new art for a new order. As a result, Baranov-Rossiné was immediately accepted by the avant-gardeand achieved important educational and governmental positions such as Head of painting at the SVOMAS (Petrograd Free Studios) and member of the Izo-Narkompros (Department of Art and Industry of the People’s Commissariat of Education).

It is in Russia that the artist perfected the ‘Octophonic Piano’ (1920-1923), the first electronic instrument to create an ideal fusion between colour and music. Consisting in a piano with coloured disks illuminated by a magic lantern instead of strings, this silent instrument projected ever-changing coloured patterns at the touch of each key. Surprisingly, the instrument was functional to the point of being used for a season of concerts at the Bolshoi and Meyerhold theatres, and was later patented. 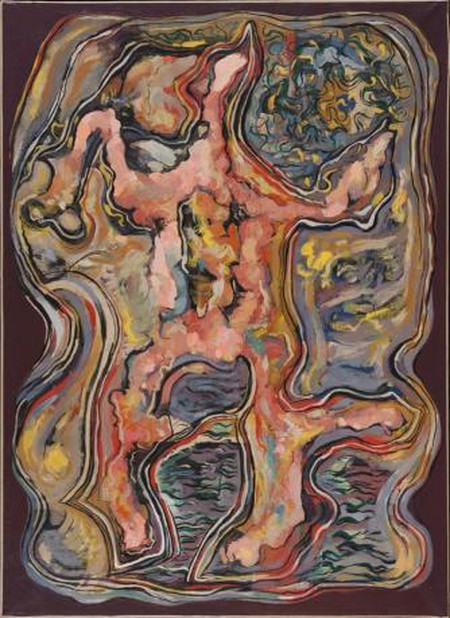 Crowded with artworks, the lower-ground space juxtaposes the artist’s earlier and later works: by bringing early and late paintings together, the exhibition allows the viewer to wonder at the artist’s impressive career. For on the late canvases, cubist angles yielded to soft-edged biomorphic forms, and the mechanical became metaphysical. And the same variety can be retraced in the late works themselves: grounded in literature, ‘Lady Chatterley’ (1932) arks back to the symbolism of the World of Art group, whilst ‘Abstract Composition’ (1932)forsakes figuration to look forward.

Indeed, this variety is what makes Baranov-Rossiné’s oeuvre so compelling; visually dazzling, his catalogue of heterogeneous styles confuses and, at times, disorientates, but most importantly – fascinates the viewer.

Vladimir Baranov-Rossiné (1888-1944): From Cubism to Surrealism is on display until 20 March 2014 at the St Petersburg Gallery in London.