The Rainbow Protest that Played Out at the World Cup 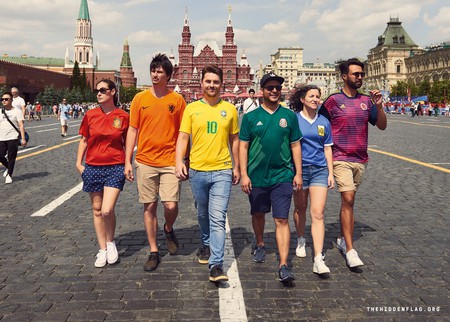 In the same weekend that Pride filled the streets of London, six activists in Russia put on their own slightly stealthier display of celebration with a rainbow flag like no other.

Six members of the activist group The Federación Estatal de Lesbianas, Gays, Transexuales y Bisexuales (FELGTB), the predominant LGBT group in Spain, wore six football shirts. In itself, no great surprise at an international football tournament, but the kits of Spain, the Netherlands, Brazil, Mexico, Argentina and Colombia (away) replicate the rainbow flag when lined up next to each other. 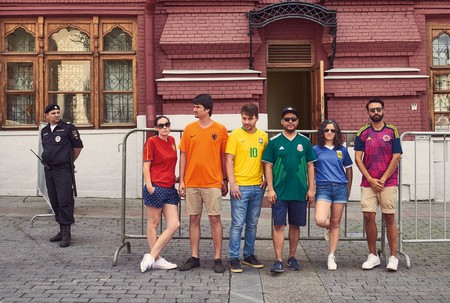 It’s a direct response to Russia’s anti-LGBT laws. Since 2014 “gay propaganda” has been banned in Russia, and the rainbow flag is included in that legislation. As individuals walking through the streets of Moscow, the FELGTB activists weren’t breaking any laws and yet could still carry out their protest.

Before the tournament began, Vitaly Milonov, who was part of the team that crafted and proposed the legislation, stated “I want to remind them that, no matter how much they try lobbying, their hideous way of life is condemned all over the world. They do not have the right to propagandize their hideousness.”

It’s at odds with the rhetoric produced by Russia’s World Cup organising committee, who said “The display of rainbow flags in the stands or at public celebrations will be allowed.” Yet, just days before the tournament kicked off, Diversity House – the safe space for the LGBT community and ethnic minorities to watch and enjoy the World Cup in Russia – was shut down and locked by the building’s owners.

The idea to each wear a shirt representing a colour on the rainbow flag is part of the activists’ Hidden Flag campaign. The group said, “There are still countries in which homosexuality is persecuted, sometimes even by jail sentences, and in which the rainbow flag is forbidden. Russia is one of these countries.

“Because of this, we have taken advantage of the fact the country is hosting the World Cup at the same time as Pride Month, to renounce their behaviour and take the rainbow flag to the streets of Russia. Yes, in the plain light of day, in front of the Russian authorities, Russian society and the whole world, we wave the flag with pride.”