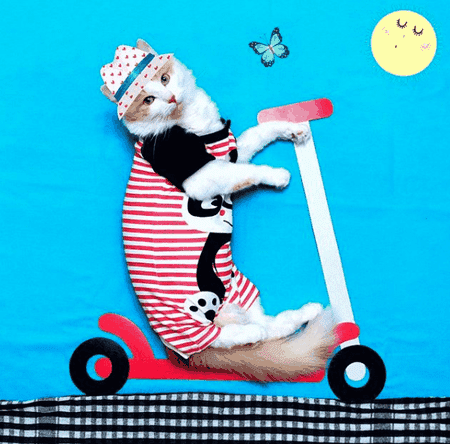 There are a lot of quirky Instagram accounts coming out of Russia that leave people wondering, ‘Where did they come up with the idea for that?’ From strange choices in pets to patriotic military feeds to accounts belonging to people who have a lot of time on their hands, here are some of the more unusual Instagram accounts you should follow.

An account that relishes military action, @politearmy‘s feed is loaded with tanks, guns, planes and the occasional explosion. There are aerial photographs of planes flying in formation and ships at sea, plus military officers in action. However, the feed doesn’t appear to be the official feed of the Russian Armed Forces. It appears to be just the love project of a military fanatic, with a strong sense of national pride, who knows some pretty incredible photographers.

This feed tells that classic love story between a family and their bear. The story goes that Svetlana and Yuriy Panteleenko took Stephan the bear in when he was just three months old in 1996. Now a hulking seven-feet-tall, and weighing in at over 130 kilograms, Stephan is now a fully integrated and beloved pet. He eats over 25 kilograms of fish, fruit, vegetable and porridge a day and earns his keep as a model and actor. He also has a pretty active insta account, and @svetlan_nko69 is full of pics of the beautiful beast just hanging out and mucking around, as well as him posing in glamour shots.

Another unusual choice for a pet, @I_am_puma is all about Messi the house cat, er cougar. Named after the footballer Lionel Messi, the domestic wildcat is the beloved pet of Sasha and Masha who live in Penza, a town in the Volga Region, East of Samara. Born in captivity in the Saransk zoo, he was sold to the Penza Zoo, where it was discovered he had a health condition. It is unclear whether the zoo realised Messi had health problems and tried to sell the regal feline or whether the couple fell in love with him and made an offer. But, somehow, the adolescent animal now lives a healthy and happy life with Sasha and Masha at home – and clearly loves it. Messi goes to dog obedience class, gets trips to the beach and to the forest as well as lots and lots of cuddles.

According to its VK page, @russianpolice is a non-official project ‘dedicated to the activities of the Ministry of Internal Affairs of the Russian Federation’. There are strict rules as to what gets posted as the feed aims to highlight the police force in a positive way. Essentially this feed is a citizen-driven PR campaign for law officers. Indeed, every police officer and their German Shepard featured in the feed look like law enforcement professionals, ready to help and serve.

This is the feed of the Yekaterinburg-based artist and photographer who took a photography award for her photo shoot with Barbie and Ken in a Soviet communal flat she constructed out of a cardboard box. Lara Vychuzhanina’s feed is filled with her delightfully eccentric and niche pastime of photographing dolls in detailed sets she’s created herself. Lara works as a commercial photographer but has been photographing dolls since she was a young child and @lara_art_dolls is clearly the result of technical skill and a love of the subjects.

Alexander Kravets likes to dress up. He also likes low-budget crafting. He also has a fairly keen sense of humour, because his feed, @bammbato, is filled with pictures of him in homemade budget costumes that make fun of some fairly famous costumes. He makes jokes out bloggers, stars, movies, and any remotely memorable image he stumbles across. He calls his pastime ‘zero-budget cosplay’ and replicates the pictures he parodies with kitchen utensils, vegetables, pets and food among whatever else he can get his hands on. Think pizza masks, hair made out of aubergines and a tonne of photos that parody supermodels posing sensually.

Probably one of the least dignified things to do to your pet, but one of the funniest is dressing them up. And @kuzya_in_red takes it to the next level. Kuza lives in Moscow and is the star of many photoshoots that are conjured up by his owners. Kuza’s owners base these photoshoots on how they believe Kuza would live if he was a human. Sometimes Kuza makes pizza in Italy, sometimes he drinks beer in Germany, or sometimes, he just likes to chill in outer space, listening to some tunes.

Perhaps one of the most unusual photo blogs around, @angela_nikolau incorporates travel photography and a love of dizzying heights. Nikolau posts photos of herself casually hanging about in precarious places. Clearly not one to suffer vertigo, she poses on the edges of buildings and on construction structures, smiling, sometimes in a yoga pose, sometimes kissing her boyfriend. These poses are always set in front of stunningviews of some of the worlds biggest and most beautiful cities.