The Most Beautiful Churches in St Petersburg 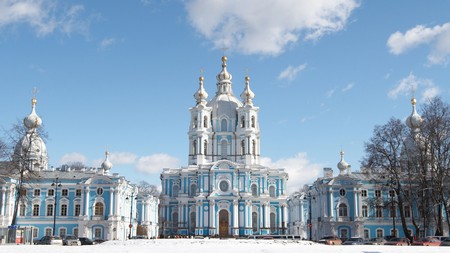 The city of St Petersburg officially came into existence under Tsar Peter the Great’s rule in the early 18th century, but many of the its religious buildings date back to the 15th and 14th centuries. Explore our guide to some of the most beautiful and historically important cathedrals and churches in Russia.

Church of the Savior on Blood 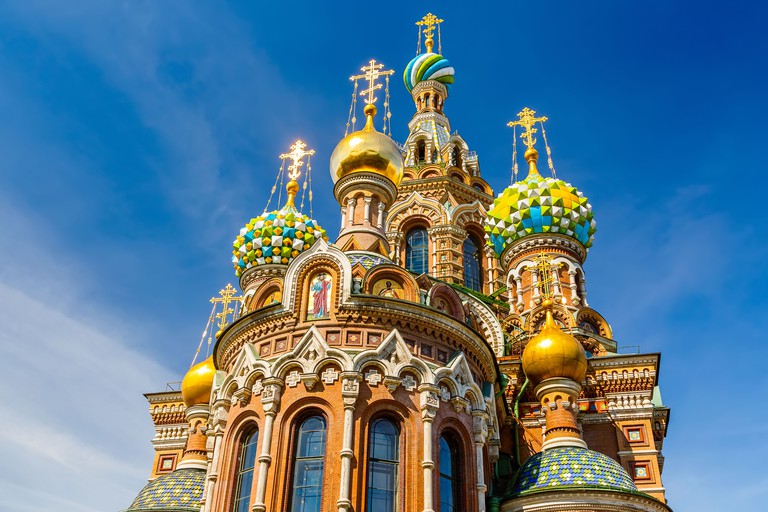 © Sergey Borisov / Alamy Stock Photo
Located just behind the main avenue in Nevsky Prospekt, the Church of the Savior on Blood was constructed at the beginning of the 20th century. It was built at the location of the death of Emperor Alexander II in 1881. Despite the city’s architecture being executed in mainly baroque and neoclassical styles, this cathedral goes back to the roots of medieval Russian architecture. The church’s decorations, predominantly on its walls and ceilings, contain a vast collection of detailed and carefully placed mosaics occupying approximately 7,500 square meters (81,000 sqft), which depict scenes and characters from the Bible. It is believed to be the largest collection of mosaics in the world. The interior decorations feature works by some of the most renowned Russian artists, including Viktor Vasnetsov and Mikhail Vrubel.
Open In Google Maps
Tsentralny District Saint Petersburg, 191186, Russia
Give us feedback

The Peter and Paul Cathedral 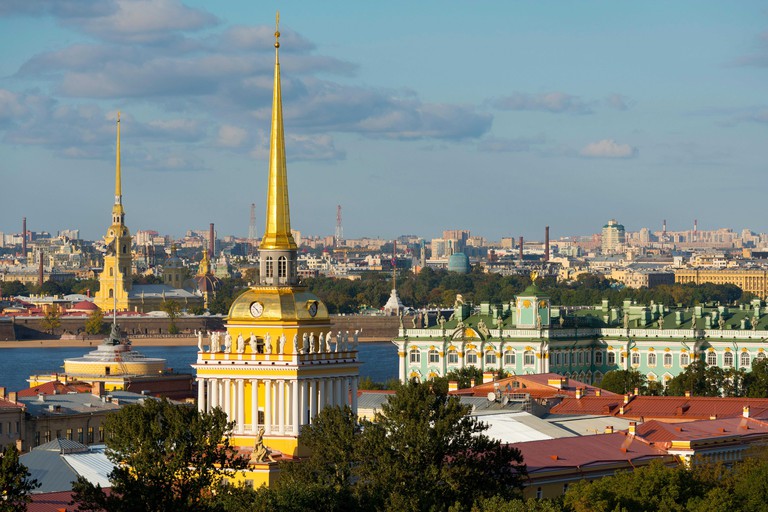 © robertharding / Alamy Stock Photo
The Peter and Paul Cathedral is a landmark of St Petersburg, no less important than the more famous St Isaac’s Cathedral, but it is often overlooked by visitors. The fortress, which was actually used as a military rather than defence base, marks the birthplace of the city. The cathedral built on the site was designed in a baroque style by the Italian architect Domenico Trezzini, and mingles details typical of Western European church architecture, such as the rectangular shape, tall towers and dome. The interior presents a spacious hall with a nave and side aisles, which is atypical of classical Orthodox church architecture. The vaults are decorated with fresco paintings in various colours and gold-pleated mouldings. The cathedral is very well lit because of the 12 wide windows, which create an atmosphere of harmony. The Peter and Paul Cathedral symbolises imperial Russia, since it once served as a burial site for the imperial family.
Open In Google Maps
Sankt-Peterburg, 197046, Russia
+78122306431
Visit Website
Give us feedback 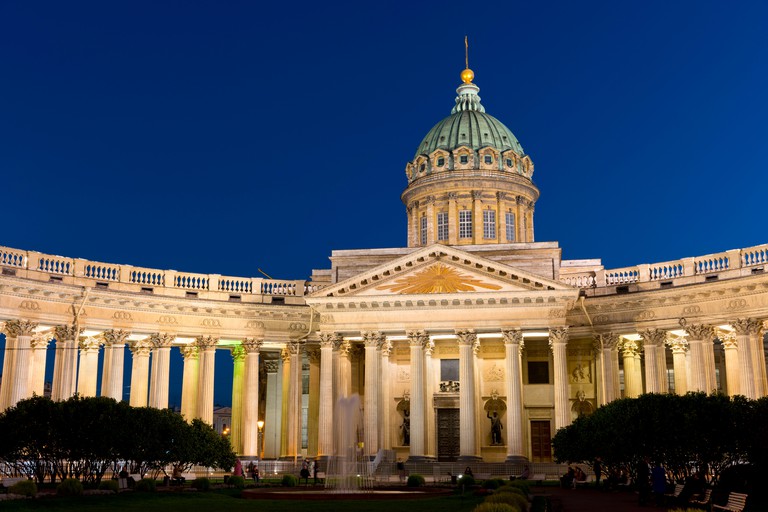 © robertharding / Alamy Stock Photo
This cathedral is dedicated to Our Lady of Kazan, the most sacred icon in Russia. It was modelled on St Peter’s Basilica in Rome. However, the Russian Orthodox Church disapproved of the plans to replicate a Catholic basilica in Russia, because of differences in religious opinion. Nevertheless, the design of architect Voronikhin found support among the royal family and its courtiers. The interior of the Kazan Cathedral is ample, featuring various icons produced by the best Russian artists of the period. The huge, attention-grabbing bronze doors are a copy of the original doors of the Baptistery in Florence, Italy. The cathedral was built in an imperial style, reminiscent of the temples of the Roman Empire; Kazan Cathedral became the first religious site in Russia to be built in a decisively European style. Its architecture and interior decorations, including sculptures and paintings, are united in a unique harmony and elegance.
Open In Google Maps
2 Kazanskaya ploshchad, Tsentralnyy rayon Sankt-Peterburg, 191186, Russia
+79819300801
Visit Website
Give us feedback

Cathedral
Facebook
Email
Twitter
Pinterest
Copy link
Share
Map View
St Isaac’s Cathedral is an outstanding example of the mid-19th-century Russian neoclassical architectural style, and is the biggest Orthodox cathedral in St Petersburg. St Isaac’s is also the largest Orthodox basilica and the fourth largest cathedral in the world. Tsar Alexander I ordered the church to be built under the directorship of the French-born architect Auguste de Montferrand. Its foundations were made more stable by driving 25,000 piles into the swampy ground of St Petersburg. The exterior walls of this incredible site were faced with grey and pink stone, and 112 red granite columns were erected around the cathedral. Its dome was decorated with pure gold and twelve statues of angels. The cost of the entire building totalled 1 million golden roubles. The Soviet government denounced the religious meaning of the cathedral and established a Museum of the History of Religion and Atheism on the site. After the fall of Communism the cathedral has remained open as a museum, while regular worship was resumed on the left-hand side.
Open In Google Maps
4 Saint Isaac's Square, Sankt-Peterburg, 190000, Russia
+78123159732
Visit Website
Give us feedback

Building, Cathedral, Church
Facebook
Email
Twitter
Pinterest
Copy link
Share
Map View
Smolny Cathedral is one of the most captivating churches in St Petersburg, and its beauty shines especially bright at sunrise or sunset, when the sun gently bathes the blue facade and domes of the church in its rich golden rays. The cathedral was designed by the Italian architect Bartolomeo Rastrelli in 1748. Rastrelli also constructed the Winter Palace and the palace at Tsarskoe Selo. The aim behind the site’s construction was to impress the Empress, Elizabeth the Great, who unfortunately passed away, and so the cathedral remained unfinished. Before the cathedral had completely fallen into disrepair, it was revived and completed by another architect in 1835. The entrance to the cathedral is framed by a semi-circular iron-traced fence, whereas the entrance steps to the altar were decorated with a crystal balustrade, and the walls and columns were ornamented with white marble. The cathedral’s Ark of the Covenant is made of 81kg (180lb) of silver. The Revolution brought Smolny a similar fate to other religious sights: the interior was heavily damaged and for many years, the building remained closed.
Open In Google Maps
1 Ploshchad' Rastrelli, Tsentralnyy rayon Sankt-Peterburg, 191124, Russia
+78129007015
Visit Website
Give us feedback 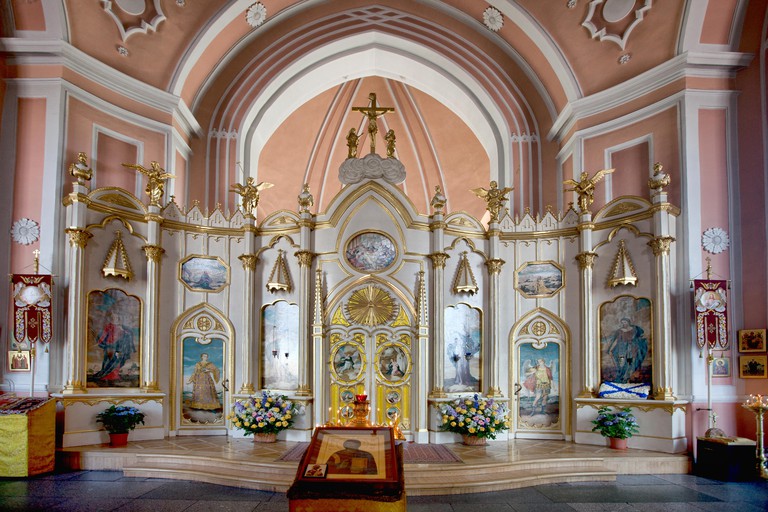 © Vladimir Sidoropolev / Alamy Stock Photo
Chesme Church is definitely one of the most unusual churches in St Petersburg. Located in the southern part of the city, it was established during the reign of Catherine the Great as the house church for the Chesme Palace, which is situated between St Petersburg and the summer residence of the royal family, the Summer Palace, in Tsarskoe Selo. It was ornamented in the gothic style typical for many Russian churches by the German-Russian court architect Yury Felton. The foundation is shaped like a stripy pink cake, topped with five sharp, neo-gothic domes. This unique church remained almost intact during the period of repressions and abandonment of religious monuments under the Soviet government, and the land surrounding the church has been used as a burial place for the war heroes of the Siege of Leningrad.
Open In Google Maps
12 Ulitsa Lensoveta, Sankt-Peterburg, 196135, Russia
+78123736114
Visit Website
Give us feedback

Cathedral of St Andrew the First-Called 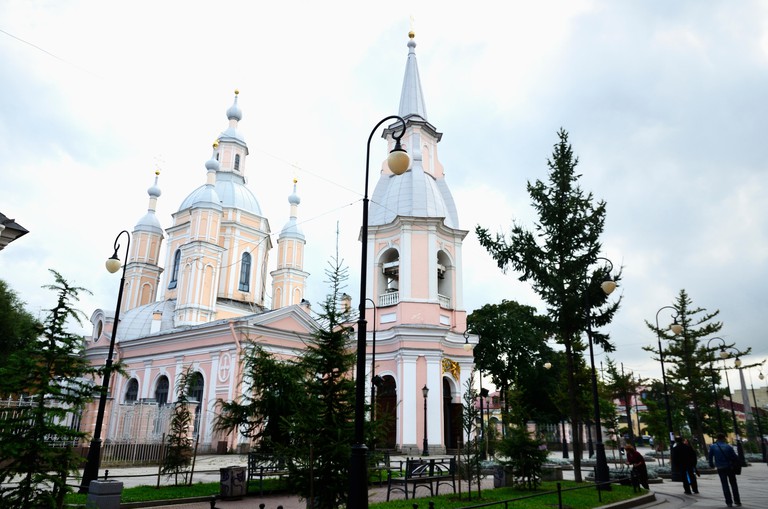 © M Ramírez / Alamy Stock Photo
The Cathedral of St Andrew the First-Called was erected in 1764 to replace a wooden church on Vasilievsky Island. It is dedicated to Andrew the Apostle, patron saint of Russia. The exterior of the site was completed in creamy pink and white, with soft decorations and fragile, tall towers. The interior of the church is much richer, with vestments in the main altar made of pure silver and weighing 115kg (254lb), the gospels in a silver frame, weighing in at 14.5kg (32lb), and an altarpiece of the Lord of Hosts, a beautiful artwork by an unknown artist. It is a lesser-known church, not often visited by tourists because of its remoteness from the city centre, and the slight difficulty in finding it. It is, however, well worth a visit.
Open In Google Maps
Sankt-Peterburg, 199004, Russia
+78123284664
Visit Website
Give us feedback
Give us feedback