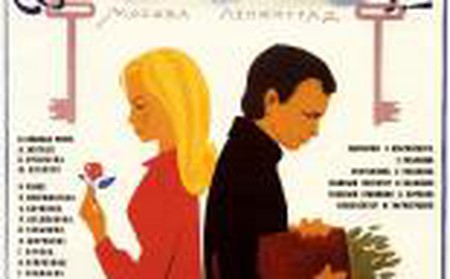 Loosely based on a play called Once on New Year’s Eve, Ryazanov’s The Irony of Fate is a Soviet romantic television film. Lucy Rubenstein takes a critical look at The Irony of Fate which is the cultural phenomenon that keeps Russians (and other former Soviet citizens) tuning in year after year.

Eldar Ryazanov’s 1975 made-for-TV romantic comedy The Irony of Fate, or, Enjoy Your Bath! remains a cultural phenomenon in the former Soviet states. Every New Year’s Day The Irony of Fate is broadcasted not only to Russia but to many former Soviet states, resulting in millions settling down to watch all 184 minutes of the distinctly Soviet equivalent of America’s It’s a Wonderful Life.

The Irony of Fate could be considered a ‘rom-com’ with one major difference. The traditional formula is intact – boy meets girl, they initially disagree but everything comes good in the end – except that the plot device that engineers their meeting is somewhat unusual. Having got drunk with his friends in Moscow on New Year’s Eve, newly engaged Zhenya has passed out and been put on a plane to Leningrad. Too drunk to know what’s going on, he arrives in Leningrad, thinking he is still in Moscow. Nothing alerts him to the fact that he is outside his hometown and when he gives his address as Third Constructers’ Street, the cab driver takes him to a building that is identical to his own, where his key even fits the lock of the apartment with the same number. Once he is inside he still does not realise where he is as the apartment even contains the same furniture as his own. When the owner, Nadya, returns and demands that Zhenya leaves her home he is adamant that she is the intruder, and it is only when she produces her internal passport that states her location as Leningrad that Zhenya realises his mistake. This element of the story may seem somewhat unfeasible to contemporary audiences, but it is what makes the film such a perfect satire of life in the USSR during the Brezhnev era.

The reason for this is that architecture in the Stalinist era had been based on a majestic, neo-classical style that created beautiful buildings but led to severe overcrowding in the cities as families were forced to live in shared apartments formerly belonging to the aristocracy. When Khrushchev became party leader following Stalin’s death in 1953, he made it his mission to construct affordable, prefabricated housing that would at least allow each family their own space. As such, millions of identical eyesores sprung up across the Soviet Union, imbuing the landscape and the population with a sense of melancholy, which is brilliantly portrayed through the tragicomic nature of The Irony of Fate.

Aside from presenting a gentle satire of the housing situation in Brezhnev’s ‘era of stagnation’, The Irony of Fate also touches on many more bleak realities of life in the USSR. Nadya has many photos of herself when she was younger around her apartment and her age is often emphasised throughout the film. She is in a relationship with a bureaucrat named Ippolit, and there is an underlying suggestion that she is only with him because she is afraid to be alone at her age. Zhenya picks up on this by saying, ’34 years old and still no family… You weren’t lucky. And suddenly, Ippolit appears, all positive and serious. You feel calm with him, secure, like being behind a brick wall. After all, he’s probably a profitable spouse: car, apartment…’ It is an account of life that undoubtedly rang true for many people in the USSR, where the sprawling bureaucracy was out of control by 1975. The nomenklatura lists, which indicated all the members of society that belonged to the privileged group that held administrative positions within that bureaucracy, granted these people and their family access to special stores across the USSR and its satellite states, guaranteeing them a better quality of life. The number of people benefiting from the special privileges of the nomenklatura lists at this time is estimated at almost 3 million. It was a sad reality that there were many ‘Nadyas’ in loveless relationships such as this.

Given this accurate portrayal of life in a ‘screwball’ style, it is not surprising that The Irony of Fate was given a theatrical release following its popularity on the small screen. Though not as overtly dissident as some of Ryazanov’s other satires, such as his most famous work The Garage, The Irony of Fate used humour to subtly highlight some of the bleak realities of life in what was supposedly the era of plenty. It is easy to understand the emotional connection that contemporary audiences felt with the film, but what is more surprising is its enduring popularity.

This may be a result of the developing love-story between Zhenya and Nadya at its core. Both are already in relationships and live on opposite sides of the country, but their blossoming relationship is the classic example of how love conquers all. Additionally, the physical slapstick comedy employed by Ryazanov to depict the drunkenness of his characters is a timeless comedic device that appeals to all. More so than this though, recently there has been a tide of nostalgia for life in the USSR as the rich in Russia grow richer and the oligarchy dominates. People who are pining for the imagined ‘glory days’ can look at the stagnant but solid years under Brezhnev portrayed in The Irony of Fate with somewhat rose-tinted glasses.

Ryazanov’s The Irony of Fate ultimately appeals on multiple levels: simply as an enduring love-story, but also as a cultural relic of a time gone-by. Its yearly repetition ensures that a new generation of young Russians subconsciously feels drawn to their Soviet past, even if this was quite the opposite of Ryazanov’s intentions.