The Coolest Neighbourhoods in St Petersburg 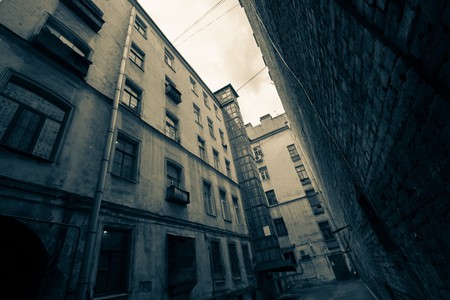 St Petersburg may be small, but it has several different neighbourhoods to explore, each with its individual charm. Quirky as they are – the city is built on islands interconnected by bridges – be aware that in summer, the bridges are drawn for the night, meaning that getting stuck is a common pitfall to avoid. Here’s our round-up of the city’s coolest spots.

Nevsky avenue is the city’s main artery – there isn’t a moment in a day when Nevsky Prospekt is completely calm and silent. The avenue and the nearby streets are the perfect places to look for dining options, shopping and nightlife. Many popular hotels are also located in the neighbourhood, since many tourist attractions are within convenient walking distance. There are a number of coffee shops to work at or watch people walk by on a sunny afternoon, such as the espresso bar Pitcher or the vegan sanctuary Ukrop. To experience the ever-lasting nightlife, check out the bars on Rubinshteyna street. With an array of places to choose from, you can start by drinking stylish cocktails at Geography restaurant and end up in the Israeli street-food bar Bekitzer.

Vasilievsky Island is the historic centre of St Petersburg. Some of the oldest buildings in the city are located on this side of the Neva river, such as the St Petersburg University, the Kuntskamera Ethnographical Museum or the Russian Academy of Sciences. It is interesting to notice how the streets are all parallel and perpendicular to each other, reflecting the original city plan of the tsar Peter the Great. Since the island is now home to many university students, it is naturally filled with bars and pubs to choose from. For a glass of wine and tapas step into the Bar of Broken Hearts Thelma & Louise, or discover the local craft beer scene at the Beer Boutique 1516.

This spot is another historic island and the perfect place to admire architecture in St Petersburg. The streets here have an undeniable charm of the past – many of the buildings house small businesses on the first floor, while the top floors are apartments, many of which have not changed for centuries. One of the notable landmarks is the Peter and Paul Fortress, which during the founding time of the city served as the city’s first stronghold. Now it is a museum with a cathedral inside – the final resting place of the whole royal family of the Romanov dynasty. As for dining, the Kommunalka restaurant would be an interesting choice to try Soviet-style dishes. Alternatively, transport yourself to England at the gastrobar Mesto for a mystic atmosphere and eclectic menu.

New Holland has been an up-and-coming neighbourhood for the past four years, and is based on an artificial island dating back to the 18th century. It is especially popular during the summer, as it is a large green space filled with cafés, bars, restaurants that host special events and festivals. This year it has undergone a number of changes, among which is the official opening of ‘The Bottle‘, a cluster of businesses housed in the building of an old prison. The first floor is dedicated to bars and cafés, the second floor to trendy fashion shops and the third floor to health and wellness.

Krestovsky Island is an elite area of St Petersburg with a large amount of expensive property built in recent years. The general feel of the neighbourhood is very calm and perfect to visit with a family. Divo Ostrov, the city’s largest amusement park can be worth a visit for the thrilling rides or just a fun day out. There are also appealing dining options, such as the serene country-style restaurant Na Rechke. A more lively option would be the Sydney Beach Club to dance the night away accompanied by local live acts and DJs.

The Moskovskaya neighbourhood follows down the Moskovskaya avenue from the city centre right to the edge of the city. For many years this neighbourhood has been fairly residential and very little was happening. Exploring the area gives an insight into the style of Soviet architecture – here massive, overwhelming buildings, simple and reserved in style, provide a contrast to the intricate palaces of the city centre. Now, as the city expands, there are more establishments opening their doors in the neighbourhood. All along the Moskovskaya avenue there are new restaurants popping up from time to time. Among the local favourites is the cosy family nook Bona Capona or the more hip Spices and Joy. For a more exciting experience, check out Floor 41, a restaurant located 145 metres (476 feet) above ground, providing a panoramic view of the city.

It is hard to define Pushkin as a neighbourhood of St Petersburg, rather it is more of a suburb. Still, Pushkin has been attracting more visitors than some parts of the city, thus becoming more a part of it, rather than an isolated entity. During the imperial times Pushkin was known as Tsarskoe Selo, translated as Tsar’s village. because it served as the summer residence of the royal family. The sky-blue Catherine Palace still stands today and is open to visitors wishing to see its lavish interiors and majestic gardens. Life here is fairly traditional in many ways: on a weekend you can see locals haggling at the market, strolling in parks or returning from the morning service at church. Still, it isn’t completely immune from modern developments, as restaurants and spas open in the area. An interesting find is the restaurant Daniel – a combination of fine cuisine in exquisite interiors.