The Best Things to Do in Kazan, Russia 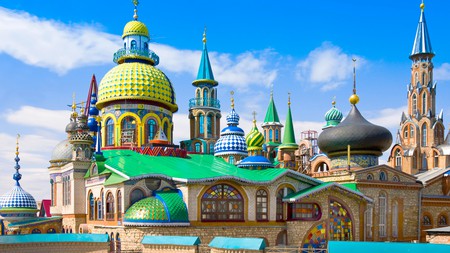 Kazan, a city deriving its name from the Tatar word for cooking pot, is true to its name. Over a hundred years older than Moscow, a genuine stew of both Tatar and Slavic cultures makes the capital of the Tatarstan Republic a treasure to explore. Here are 10 recommendations for what to do in Kazan that will ensure you get the most out of the city.

Rub shoulders with the locals in Bauman Street

Bauman Street, the main pedestrian thoroughfare, pumps life through the city centre both day and night. Alongside souvenir shops sit cafés, shops and museums with street performers and buskers out to entertain. At night people who are out looking for a good time fill up the restaurants, clubs, and bars that the strip has to offer. One of the oldest streets in Kazan, even a casual stroll down it will take you past beautiful sights such as the iconic bell tower for the Epiphany Church and the unique Monument Cat Kazan. 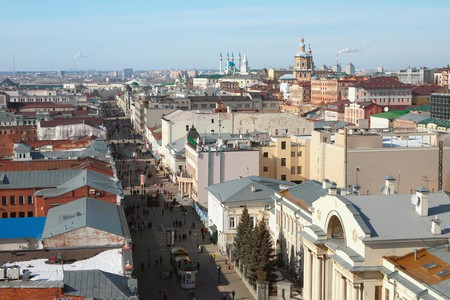 Get a culture hit at the Hermitage-Kazan Center

Art Gallery, Building, Museum, School
Facebook
Email
Twitter
Pinterest
Copy link
Share
Lesser-known than its sibling museum in St. Petersburg, the Hermitage Kazan is still a must-visit for art lovers. Many exhibitions comprehensively showcase both Russian and international art across artistic periods and mediums. Housed in a former Junker school, the building’s architecture dates back to the early 19th century and the elegant interiors are eye-catching works of art in themselves. 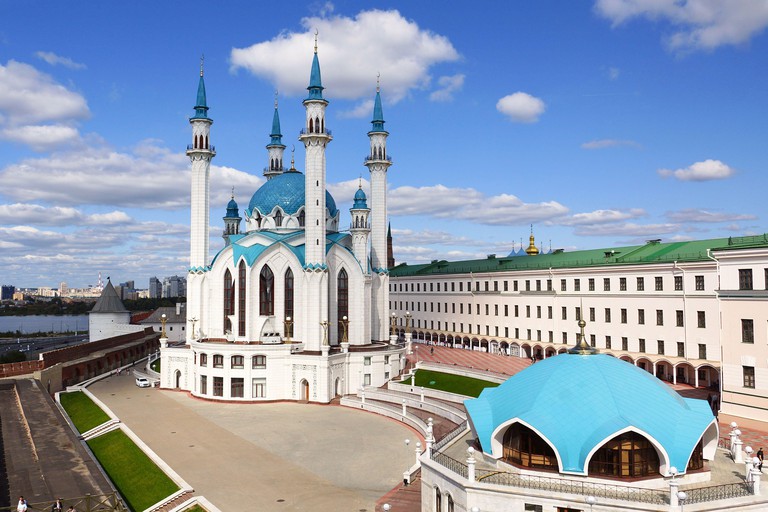 World Heritage-listed, the Kazan Kremlin is the only surviving Tatar fortress in Russia, parts of it dating back to the 16th and 17th centuries. Built at the request of the Ivan the Terrible, the bright white sandstone walls encircle the city’s historical centre filled with age-old buildings. Highlights include the Kul Sharif Mosque, the Hermitage and the Tatarstan Museum of Natural History.

Gaze at the Kul Sharif Mosque 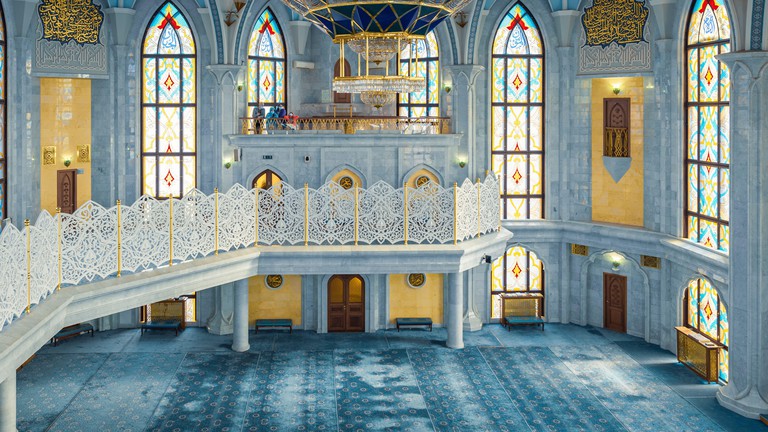 Inside Kul Sharif Mosque | © Denis Gavrilov / Alamy Stock Photo
First constructed in the 16th century and reputed to be the largest mosque in Europe at the time, the Kul Sharif Mosque was destroyed when Ivan the Terrible stormed through Kazan in 1552, effectively bringing the city into Russia’s realm. Efforts to rebuild the mosque didn’t start until 1996, and were only completed in 2005. While restoration may seem like it was a long time coming, it was worth the wait. With white-washed arches, domes and minarets topped with sky-blue, the Kul Sharif Mosque is as grand and impressive as it ever was while staying true to its former self. 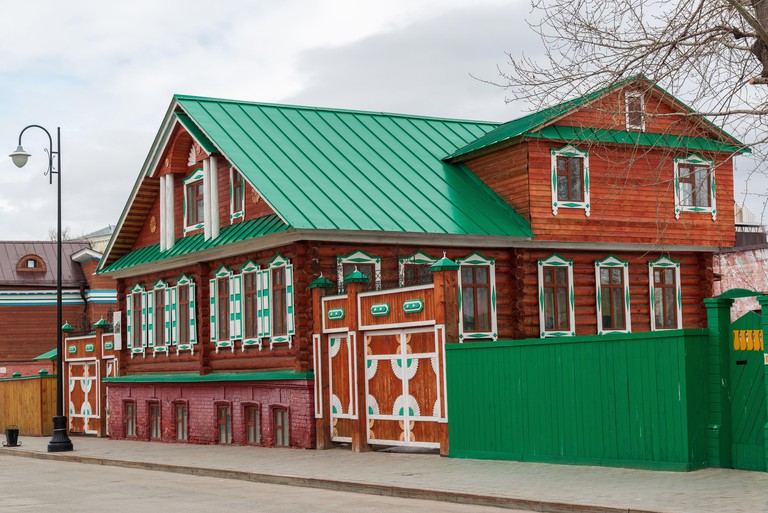 Kazan Museum Chak-chak | © Olga Volodina / Alamy Stock Photo
Sample the flavours of Tatarstan at any of the outstanding restaurants and cafés that have earned Kazan its reputation as a haven for foodies. Influenced by both Russian and Eastern cuisine, soups, dairy and beets feature just as much as sesame seeds and savoury, Turkish style pastries. Those with a sweet tooth shouldn’t miss the Museum of Chak-Chak, an interactive space dedicated to traditional tartar food and drinks, in particular chak-chak – honey baked balls of dough, served at celebrations and festivities.

Be inspired by the Temple of All Religions 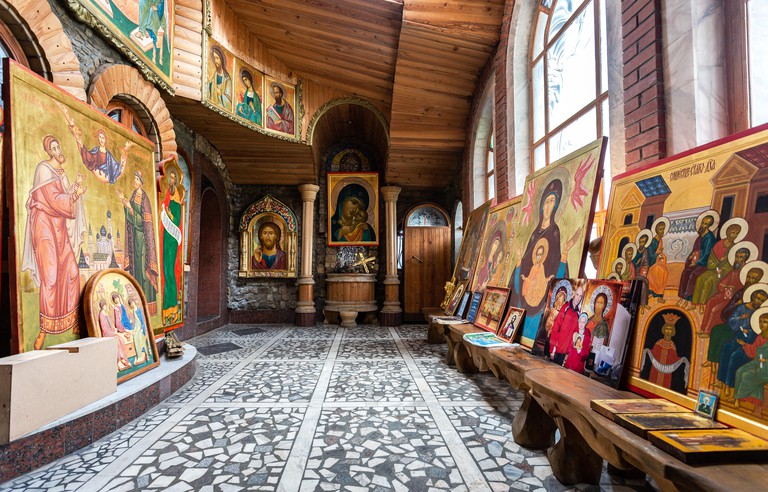 Hall with christian orthodox icons in the Temple of All Religions | © Alexander Blinov / Alamy Stock Photo
As a multi-faith place of worship, the inclusivity of religious beliefs systems is a driving force in the Temple of All Religions’ design. Created by local artist, architect and benefactor Ildar Khanov and a team of assistants he met through his work in rehabilitation services, the delightful jumble of colours and design draws on sixteen different faiths for inspiration. Sixteen minarets, spires and cupolas are coloured with neon greens, yellows and azures, each embellished with with a Christian cross, the Star of David or Muslim crescent, representing the unification of the major religions under one roof.

Ponder matters of the heart at Syuyumbike Tower 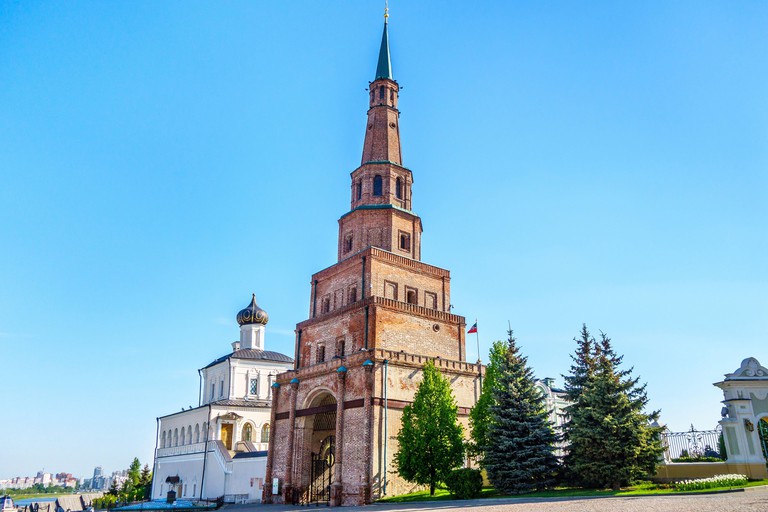 Syuyumbike Tower | © Dmitry Evseev / Alamy Stock Photo
The legend of the tower says that after Ivan the Terrible seized Kazan he then wanted to wed Princess Syuyumbike, who was less than impressed with the idea. She convinced Ivan that she would marry him on the condition he built a tower higher than any the city already had. He obliged and under the guise of taking in the view, Syuyumbike went up to the top and flung herself off, so to avoid the impending marriage. While this fable has managed to linger throughout the years, it is estimated that construction of the 58-metre tower occurred in the 17th or 18th century, long after Ivan the Terrible, when tiered, wedding-cake like buildings were popular. 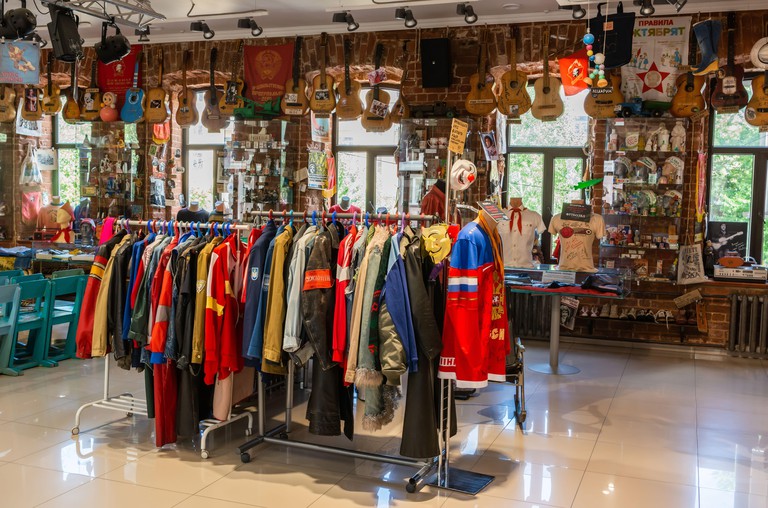 Soviet Lifestyle Museum | © Zeytun Travel Images / Alamy Stock Photo
Over-flowing with kitsch knick-knacks, trinkets and relics of a time now long gone, the quirky Soviet Lifestyle Museum pays homage to the cultural happenings during life under the Iron Curtain. Based in a former communal apartment, the collection spans from the 1930s to the 1990s. While most of the memorabilia relates to the music and art of that era, there is a Soviet secondary school experience exhibition as well as a rack of vintage soviet clothes visitors can dress up in.

Catch a match at the Kazan Arena 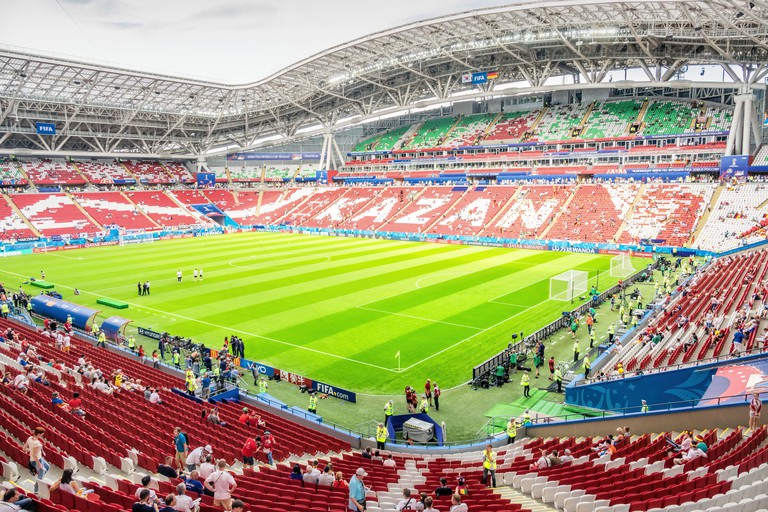 Kazan Arena | © Andrew Palmer / Alamy Stock Photo
As a host city for the 2018 FIFA world cup, Kazan is now getting recognised as a sports destination. Designed by the international architecture firm behind the Sochi Olympic Stadium, Populous, and completed in 2013, the Kazan Arena is state of the art. Since its opening it has already hosted several international competitions and is also now the home stadium for FC Rubin Kazan. It has a capacity of 45,000 people, and during the 2018 world cup it will host several games, including a quarter-final.

Soak up the local atmosphere at the Central Market 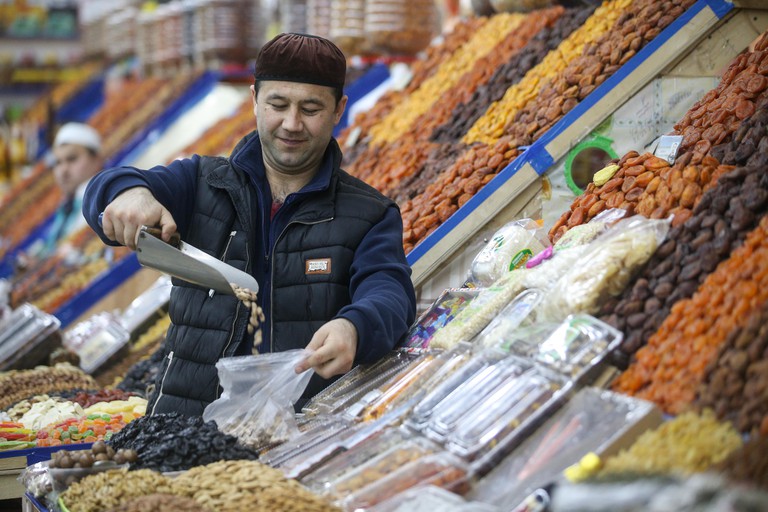 Echoing Tatar bazars of yore, Kazan’s central market is a vibrant reminder of life in bygone times. Vendors push their wares and rub shoulders with babushkas selling produce straight from their garden, or berries and mushrooms foraged from nearby forests. An onslaught of smells, tastes and sights, the central market is the place to be to soak up local atmosphere, buy souvenirs, or get stuck into a tasty lunch.

Looking for things to do in Moscow? Check out our city guide here.