Best Bars in Moscow to Watch the 2018 World Cup 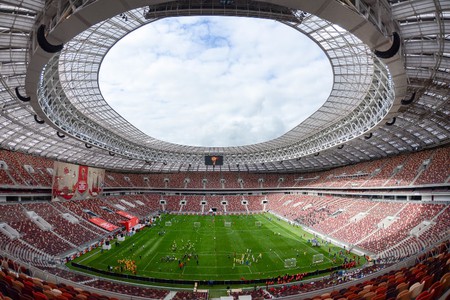 As the FIFA World Cup is reaching its peak, securing a ticket is becoming nearly impossible. Luckily for those who don’t get to watch the matches in Moscow’s stadiums, the city has no shortage of bars to watch the game. Here’s Culture Trip’s list of the best places to enjoy Russia 2018 in Moscow.

This is the best place to watch sport in Moscow, and not just because they screen it 24/7. Housed in a historic mansion, Liga Pap boasts massive TV screens and delicious food and drink.

With an interior created by Irish pub designers, the homey Tipsy Pub seats around 170 people and serves some of the best burgers in town. The pub has two floors decorated with authentic Irish memorabilia and sells a wide selection of draft beer. The Tipsy Pub also serves up a variety of home-cooked style dishes.

If watching a football game in an anti-nuclear bunker is on your bucket list, there’s a place in Moscow where you can cross it off. Located 65 meters underground, Bunker-42 is a former secret Soviet bunker right in the heart of Moscow, which now houses an atmospheric restaurant and a Cold War museum. You can take a tour of Bunker-42’s winding hallways and secret rooms, grab a bite and wash it down with some local beer, watch a football match, and even play a game of laser tag.

Glastonberry pub combines great beer, decent prices and high-quality entertainment. What started as an intimate music club soon became one of Moscow’s hippest concert venues, with a unique atmosphere of an old English pub. Whether you choose to watch a football game here, listen to a popular local band or have a night out with your friends, you are sure to have fun.

One of the most aesthetically pleasing pubs in Moscow comprises two floors, predictably filled with Irish memorabilia. Named after Dublin’s central railway station, this spacious place offers you everything you’d expect from an Irish pub: fantastic beer, Irish music and live football.

Tap & Barrel is situated in the centre of Moscow, on the site of the legendary Soviet bar Yama (‘The Pit’). Known for its traditional Irish food and drinks, the Tap & Barrel is the perfect place to watch those all-important World Cup games.

With its simple interior, large screens and friendly staff, Harat’s Irish Pub is a great place to catch a game. Harat’s stocks a number of beers and offers a variety of traditional Irish and English dishes, along with lots of beer-friendly snacks.

Chelsea is a place for football fans who know their food; this gastropub is considered one of the best in the city. Chelsea offers a good selection of beer brands and 100 whiskeys, and claims to cook the food of all former British colonies, which gives the chef plenty of space for experimenting. The must-try dishes are stew soup, grilled squid and cherry strudel.

Arguably the friendliest pub in Moscow, Petrov & Vasechka is where the food is fantastic and signature cocktails have names that’ll test your knowledge of Russian culture. Petrov & Vasechka’s highlights include New Orleans-style barbecue ribs, kimchi burgers and unagi salad. The pub’s quirky interior, charismatic staff and delicious cocktails are three reasons why you should head here.

Gastropub Bruxelles is a favourite of locals and tourists alike. Enjoy the football here while sipping on delicious Belgian beer and tucking into some of the best food around.

With its first-class menu and big-screen TVs, Beer Happens is a hungry sport fan’s dream. If the pub becomes too overcrowded, check out Beer Happens’ shop, which sells a variety of beers at discounted prices.

If you plan to hit John Donne on a game night, be sure to get there early as it gets packed. Latecomers won’t be able to squeeze their way in. On regular days, there’s less of a crowd, making it an ideal spot for beer connoisseurs and pub-lovers.