The Best Russian Snacks to Have with Beer 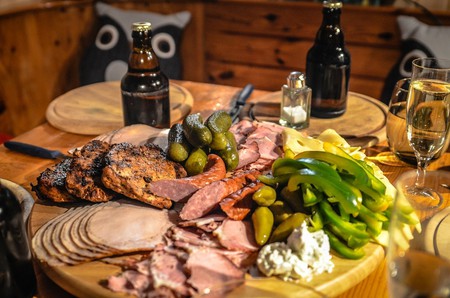 Beer drinking culture is very well developed in Russia. Here beer accompanies long evenings with friends or good music or games of Russian cards. Beer is good, but it is even better with local snacks, which are quite different from the typical bar snacks found outside of Russia. We suggest you take a look at a few of our favourite snacks found only in Russia.

Holodets is considered to be a favourite cold course or appetizer in Russia, made perfect by each family’s babushka. You absolutely can’t avoid it while visiting this country. The course is first boiled with special ingredients and then left in a cold place until the liquid becomes a jelly. Served with traditional Russian sauces and vegetables, holodets is a very common course during Christmas holidays. It can be found on most restaurant or pub menus.

Russian homemade pickled cucumbers are undoubtedly the best. They will be the most common accompaniment to your beer or vodka tasting. Pickled cucumbers can be bought in every supermarket and they’re usually served in beer and vodka bars. These cucumbers go fine with any dish and local drink.

The most popular fish appetizer in Russia is Selyodka fish. Usually served with black bread and onion rings, the dish was created during Soviet times and became very popular at celebrations. You can find this snack at any Russian restaurant or bar. It goes very well with beer or vodka or just by itself.

Siberian pickled mushrooms are on high demand in Russia. You might even see long queues at the market if the owner of the kiosk is a well-known gourmet mushroom trader. This homemade gastronomic delight can only be bought at the market, and it will most likely have a bit of a story behind it. First, the mushrooms are hand-picked in the woods of Siberia early in September; then they’re accurately and precisely prepared at a special venue. Many Russians will agree that Siberian Pickled Mushrooms are the best beer and vodka snack.

Russian Vobla Fish is a salt-dried beer snack, and it’s very common in Russia. You can’t buy it at the bar, but you can find it at local markets and try it at home. An interesting fact about vobla is that if you want to experience its real taste, you can swallow it down with beer. When both are mixed, the distinctive pure flavour comes out.