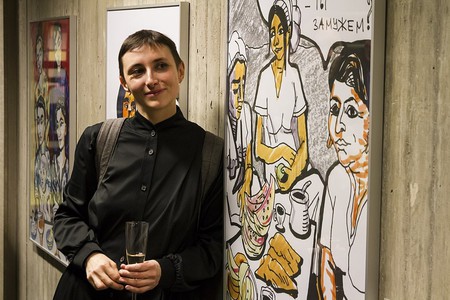 Russia has a long history of artists who make political statements through their art. Continuing this tradition are the women practitioners whose work push the feminist agenda and comment on Russia’s treatment of women. With dry humour, sharp concepts and a creative touch, here are seven of the best feminist artists working in Russia today.

Lomasko creates graphic stories and comics about the people on the periphery of Russian Society; the prostitutes, the skin-heads, the LGBTQ protesters and community, indentured servants and children who are growing up in isolated villages. Most recently, she travelled to the religiously conservative Dagestan, to document women’s relationship with religion. Although her work is technically not banned in Russia, she has gone on record to say it is hard to find a curator or gallery owner who wants to work with her. As a result, her work is viewed inside Russia through online platforms, and mainly by a liberal audience.

Natalia Pershina-Yakimanskaya (a.k.a Gluklya) lives and works out of St. Petersburg and Amsterdam. While she works with visual mediums, she is best known as a performance artist. She is a co-founder of artist collective Factory of Found Clothes (a wordplay on the factory of found hopes in Russian), which explores gender and social issues through installation, performance and video. She is also part of the political collective, Chto Delat? (What is to be Done?).

Gandhi is a street art collective who focus on equality and social issues. They work out of St. Petersburg using stencils and stickers. The immediacy of their work means they can comment on social issues while they are still current, and their commentary covers the treatment of the elderly, Russia-Ukraine relations, race-relations as well as feminism. The collective take their name from the Indian politician because of his non-violent opposition. The group formed around 2010, after they were collectively frustrated with the limitation of working inside the gallery system.

A Moscovite who works in both visual art as well as participatory projects, Bolotyan investigates gender and feminity with a gentle sense of humour. Her participatory projects recreate social situations between men and women. They have included inviting audience members to determine the nationality of an unknown woman, to asking men out on a date while in the museum. She is also known for her illustrations she makes of people on Moscow’s metro. She first takes photos of people with her phone and then bases her illustrations on these. In doing so, she captures the subtle gender roles and behaviours at play.

Smetanina is a visual artist who works across photography, graphics and installation as a solo practitioner and collaboratively with Ukrainian feminist artist, Oksana Brukhovetskaya. Together on project Feminist Pencil, they created work that addressed the gendered stereotypes in relation to women and mental illness. This project was inspired by mental health patients Smetanina met who claimed to have been discriminated against because of their mental health issues and their gender. In 2013 she was nominated for the Kandinsky Project Prize, an award that aims to support and promote Russian contemporary art.

Daria is the moniker of an unknown street artist who takes posters that advertise prostitution and escorts and transforms them into a feminist statement. She aims to humanise the advertised woman, rather than objectify them. For example, she will blank out everything in the advert aside from the woman’s name and write a story about her, or completely alter the poster through collage so they become something entirely different altogether.

Zaslavskaya uses illustration, painting, sly humour and inference to make her statements. She has made a collection of watercolours of raw meat to evoke the female form. She also paints mundane, everyday objects that are inherently ungendered by associated with gender, such as kitchen utensils, to highlight the traditional binary gender roles they stand for and become. She is part of Unwanted Organisation, a queer feminist art group made up of artists and social researchers.