The 8 Most Outrageous Performance Protests in Russia 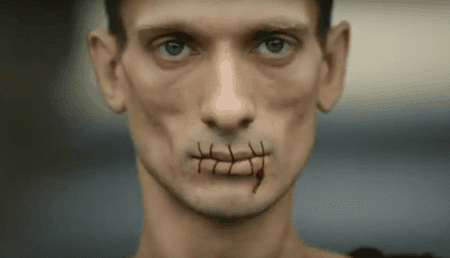 Perhaps it is the legacy of an autocratic state that political performance art in World Cup 2018 host nation Russia is often fairly out there. Since the Federation’s beginnings, artists, unwavering in their opinions and staunch in their political criticism, have taken to the streets and public spaces to make their point. Here are some of the most outrageous and extreme political acts of art in Russia’s history.

Expropriation of the Territory of Art

In 1991, the early days of the Russian Federation, members of the group Expropriation of the Territory of Art (ETI) lay down in Red Square to spell out the Russian profanity that is used as slang for both a rooster and penis. The Law of Mortality had just been passed, which forbade the use of obscenities in public places. Despite the timeliness of the statement, group members claimed there was no political motivation behind what they claimed to be a purely artistic act.

In Memory of the Decembrists, Voina

In 2008, to protest against homophobic and racial slurs made by the then Moscow Mayor, Yuri Luzhkov, the group Voina (which means war in Russian), staged a mock hanging of two homosexual men and three Central Asian migrant workers in a busy supermarket. The title of the piece refers to the 1825 military uprising against Tsar Nicholas I, dubbed the Decembrist revolt. Referencing the subsequent hanging of Pavel Pestel, leader of the dissidents, Voina members held up a sign that read: Nobody gives a f*@k about Pestel. 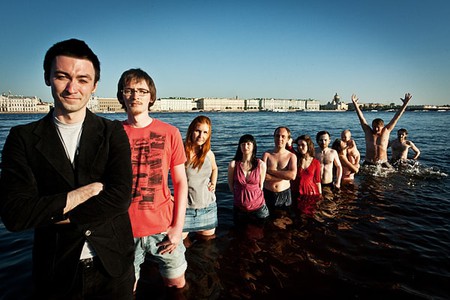 The bright balaclava-clad group of women shot to international stardom when they stormed the Cathedral of Christ Our Saviour in 2012. They staged a brief punk-rock protest song about their perceived links between President Putin’s government and the Russian Orthodox Church and were quickly arrested. Three members went on to be convicted of ‘hooliganism motivated by religious hatred’ and served a prison sentence for several years. 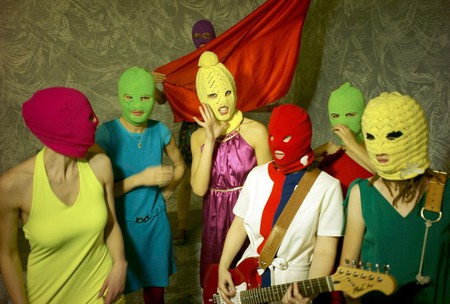 The first confronting and extreme performance in what would go on to define his career, Pyotr Pavlensky, then relatively unknown, sewed his lips together in protest of the government’s unjust treatment of Pussy Riot members and the silencing of free speech. While the trial was still ongoing, Pavlensky sewed his lips up and then silently (obviously) stood outside St Petersburg’s iconic Kazan Cathedral. Instead of getting arrested, medics were called to the scene to check Pavlensky’s mental faculties.

To protest against the laws that suppress civil liberties such as the legislation against homosexuality, Pavlensky lay naked in front of St Petersburg’s Legislative Assembly cocooned in barbed wire. Apathetic and motionless, he remained there until the police cut him out of the wire and took him away.

In 2013 Pavlenkey returned to the headlines when he hammered a long nail through his scrotum and into the cobblestones of Moscow’s Red Square. The nailing took place on Police Day, the holiday where police achievements are celebrated. The artist statement argued the performance highlighted the chauvinism entrenched in Russian society and its relation to power, as well as the general apathy and indifference of the Russian people.

Sitting on top of Moscow’s Serbsky psychiatric centre, Pyotr Pavlensky sawed off his chunk of his earlobe with a large knife in a Van-Gogh like act of protest. Naked, he sat there in the winter’s cold as blood ran down his neck and chest until police dragged him away. The 2014 statement of self-mutilation was to draw attention to Kremlin driven use of politically-motivated psychiatry. 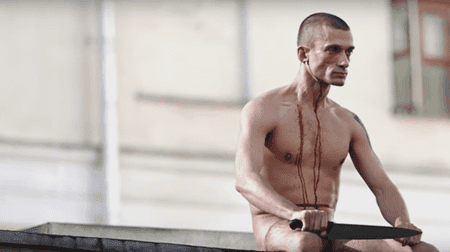 The Exorcists: the Defilement of the Mausoleum, The Blue Horsemen,

Two artists sprinkled holy water on Lenin’s mausoleum in the red Square, while crying Rise and be gone. Using humour as their tool, the collective aimed to “destroy the things people attach themselves to”. The act only lasted a few minutes before the artists got arrested.