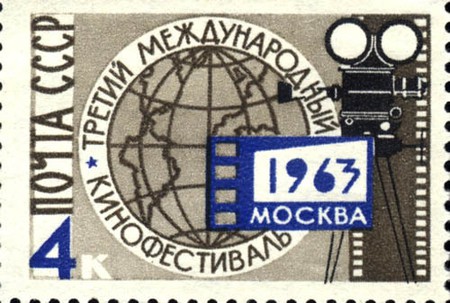 A stamp commemorating 3rd edition of the Festival in 1963 | © WikiCommons

Russians are proud of their cinema. From the Soviet classics to modern masterpieces, films are always a good icebreaker while making friends with Russians. Where there are films, film festivals must follow. The calendar of film-related events in Russia is full of hidden gems. Here is the list of seven best film festivals that Russia has to offer.

Moscow International Film Festival was first held in 1935 with Sergei Eisenstein as the chairman of the jury. It is the second oldest film festival in the world, right after the Venice Film Festival. The second edition of the festival was held in 1959, and then taken place biannually (alternating with Karlovy Vary Film Festival) until 1995, when it began being held every year. Its programme includes both Russian and international feature films, documentaries and short films. In 2017, a separate section of the festival was devoted to films unfolding in virtual reality. MIFF takes place every year at the end of July and is most certainly worth your attention.

A stamp commemorating 3rd edition of the Festival in 1963 | © WikiCommons

Doker is a crowd-funded documentary film festival organised by a group of highly devoted documentary filmmakers. Despite its relatively short history, it has already grown to be an important part of the international documentary festival scene. Doker draws some of the most interesting filmmakers and the most accomplished jury members to Moscow every year. The exact dates of the festival vary from year to year, but if documentary films are your thing, it is worth planning a separate trip to Moscow just to attend Doker.

Kinotavr is the biggest festival of Russian fiction films. It’s held annually in Sochi. Its first edition took place in 1991. Every year Sochi turns into the capital of Russian cinema, drawing the brightest-shining film stars and the most devoted audience. Since the festival takes place in June, it is a perfect destination for those who are fond of great films and beach holidays — Sochi is one of the biggest beach resorts in Russia.

The Kansk festival is one of the most interesting events on Russia’s calendar. It takes place in the town of Kansk in Siberia, in Krasnoyarsk Krai. The town was found on the internet and chosen to host the festival since Kansk in Russian is pronounced in a very similar way as Cannes (where the famous annual French international film festival is held). The International Kansk Festival is open to both professionals and amateurs creating some sort of digital video art: short films and video projects not exceeding 30 mins in length. The festival is held every year in August/September. Some of the screenings take place in Moscow and St. Petersburg as well as in Kansk.

Shorts is an international festival of short films. Fiction films and animations not exceeding 15 minutes in length take part in the competition. Films longer than that, and documentaries as well, are shown in special screenings. The festival takes place every year in October/November in the town of Tula in the Moscow Oblast.