The concept of wine bars is still relatively new to St Petersburg, which is why the cultural capital of Russia has not got much to offer. Despite the lack of variety, there are some decent wine establishments, located in trendy areas, and ready to offer customers an excellent service and wine assortment. Their popularity is gaining momentum, and this guide shows you the 10 trendiest wine bars to visit in St Petersburg.

The wine bar Prosto Vino is an ideal place for a leisurely dinner in good company, which will ensure a perfect start to the night. Chief Anton Abrezov prepares hearty meals in the open kitchen, with the specialities being barley risotto with rabbit’s liver and cod with lentils and apricot mousse. The brand names of wines by the glass are written on a blackboard, there are six of them and they are updated daily. Speciality wines served here are carefully selected from interesting Russian brands from small farms in Lefkadya and Gaikodzor.
8-aya Sovetskaya, St Petersburg, +7 931 276 0871

Bar, Wine Bar, Russian, Cocktails, Wine, Beer, $$$
Facebook
Email
Twitter
Pinterest
Copy link
Share
Map View
Located in the contemporary space Fligel on ploschad Vosstaniya, but hidden from prying eyes, Do Immigration Bar was opened by Viktor Bocharov and Yekaterina Savchenko. The owners have comprised an extensive wine list from recommendations of sommelier friends, which they then tested themselves. The final selection of two dozen wines came after recommendations of the first visitors who came to the grand opening. The wine list includes wines from both the New and Old World, which are rarely found in non-specialized bars in St Petersburg. All choices are poured by the glass, and the price is fixed. There is no kitchen in Do Immigration, but the menu includes bar snacks, featuring Italian crostini, olives and pickles, or panini with prosciutto and anchovies for a hot meal.
Open In Google Maps
24/27 Ulitsa Vosstaniya, Tsentralnyy rayon Sankt-Peterburg, 191014, Russia
+79819869826
Visit Website
Visit Facebook page
Give us feedback 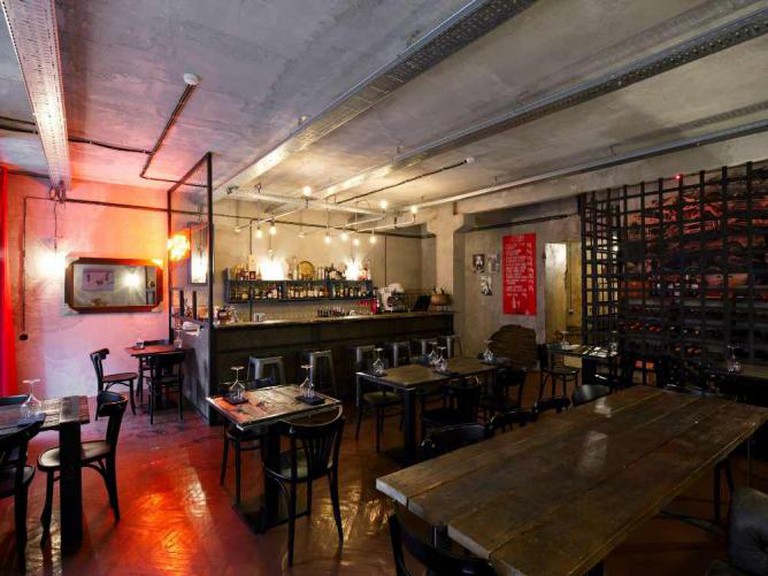 Vinnyy Shkaf, Petersburg | Image courtesy of Vinnyy Shkaf
Vinnyy Shkaf attracts customers with its cozy family-like atmosphere. The concept of the bar is that there is no division between the waiters, bartenders, and managers, and there is only one name for them – ‘the owner of the hall’. All workers can make a recommendation for customers choosing a beverage, because all complete a thorough training process. Vinnyy Shkaf focuses primarily on importing wine specialties from private wine cellars and local suppliers. World brands are imported from France, Italy and Portugal. However, the bar also offers some classic versions of internationally renowned wines such as Chablis or Gavi.
Open In Google Maps
9/3 Rubinstein Street, Tsentralnyy rayon Sankt-Peterburg, 191025, Russia
+78123108051
Visit Website
Visit Facebook page
Give us feedback

Wine Cellar 1853 is situated on the ground floor of the luxurious Kempinski Hotel Moika 22, located on the premises of an old mansion. Wine Cellar 1853 boasts an enchanting ambiance and rare antiques. Here you can escape from the bustle of the city and spend the evening embarking on a relaxed journey into the mysterious world of wine-making. Guests will appreciate the wide selection of wines imported from the Old World, including Bordeaux, Burgundy, Alsace and champagne such as Dom Perignon and Veuve Clicquot; with over than 200 variations on display, amazing authored cuisine, intimate settings and special service. 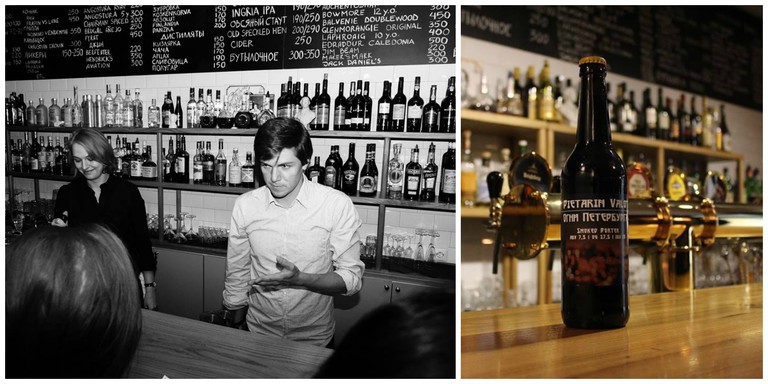 Chroniki bar, Sankt-Peterburg | © Khroniki Bar
When creating Khroniki Bar, owners focused on the traditional wine bars of old early twentieth century Leningrad (what St Petersburg was called during the Soviet period), with a typical interior design including high tables without stools, crystal clear ashtrays, and a herring sandwich available from the menu. Bartenders mainly pour strong spirits, such as vodka from different countries, whiskey, bourbon and Finnish liquor. Khroniki Bar does not boast a menu, so expect snacks only, such as sandwiches made with unusual fillings such as herring, potatoes or chicken, baked with tzatziki sauce.
Open In Google Maps
26 Ulitsa Nekrasova, Tsentralnyy rayon Sankt-Peterburg, 191014, Russia
+79112753161
Visit Website
Give us feedback 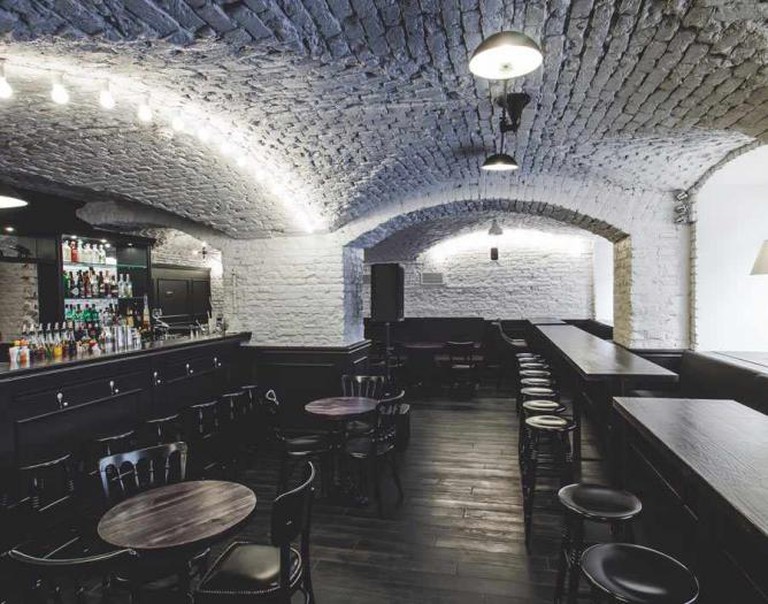 Belinsky, Sankt-Peterburg | Image courtesy of Restaurant Bar Belinsky
Resturant Bar Belinsky is a gastronomy bar located in the city center, on the Belinsky Ulitsa. It was named in honor of the writer, with the hopes of attracting an intellectual audience. The wine list for Belinsky was composed by sommelier Tatiana Sharapova. Each section, whether it will be of dry white wine or a dense red, is offered by the glass. The cuisine at Belinsky was created to provide a perfect accompaniment to wine, and the menu offers many light salads and meat, cheese and vegetarian snacks. For a more hearty lunch, choose one of the rich and nourishing soups or a hot meal such as sea bream or grilled salmon.
Open In Google Maps
8 Ulitsa Belinskogo, Tsentralnyy rayon Sankt-Peterburg, 191014, Russia
+79219039698
Give us feedback

Bar 74 specializes in French wine, with 135 products currently available from different regions of France. Furthermore, Bar 74 represents wines from the region of Savoy that are rarely imported into Russia. To accompany the great French wine are gourmet dishes of French cuisine. The wine list was carefully chosen by Ukrainian sommelier Alexey Pobegay. In addition to wines, Bar 74 will offer you to try Mark, a traditional French home-brewed hooch, the light apple liqueur Pommeau de Normandie, traditional vodka, Pastis, Armagnac and a couple of varieties of French beer.
4-aya Liniya V.O. 45, St Petersburg, +7 812 995 47 94 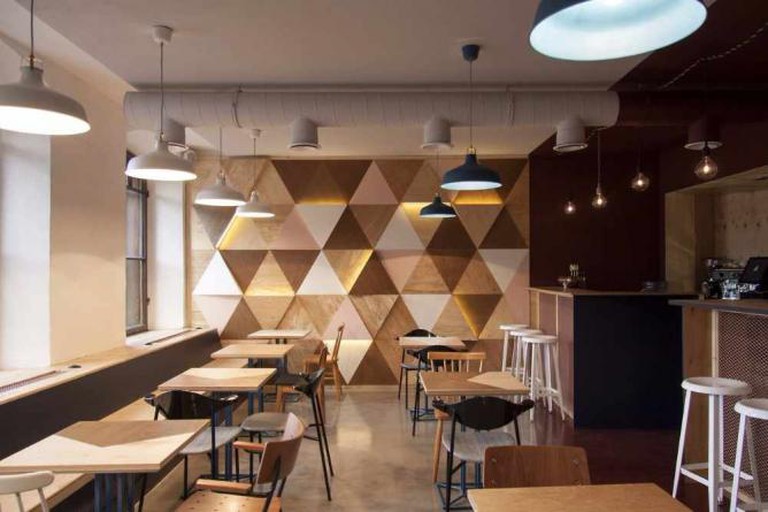 Wong Kar Wine, Sankt-Peterburg | Image courtesy of Wong Kar Wine
A small restaurant and bar designed in a Scandinavian style, Wong Kar Wine serves classic Asian dishes that are complimented by an extensive selection of good bottled wines. The wines are not bound to specific dishes, so mixing and finding a unique balance of flavors between delicious Asian cuisine and European wine will be a delight. The wine list in Wong Kar Wine is reasonably priced, and you can experiment drinking famous Pinotage while indulging on spicy dishes, or match seafood delicacies with Pinot Grigio.
Open In Google Maps
14 Fontanka River Embankment, Tsentralnyy rayon Sankt-Peterburg, 191028, Russia
+78129431930
Visit Website
Give us feedback

Bar 27 is located on the premises of Goose Goose Restaurant, and offers a variety of traditional Italian food and drinks with a modern flare. The decor was inspired by Andy Warhol’s pop art, with an additional infusion of dim lights, exposed brick walls, wooden tables and cushioned chairs. The wine list at Bar 27 consists of nearly 200 wine brands that were carefully selected by sommelier Anna Moskvitina. Almost all of them, including public favorites Pinot Grigio, Rioja Antano and Château des Muraires, are available by the glass. Bar 27 has minimized menu options from Goose Goose restaurant, which act as small but delicious wine snacks.
Bolshaya Konushennaya 27, St Petersburg, +7 812 928 3727