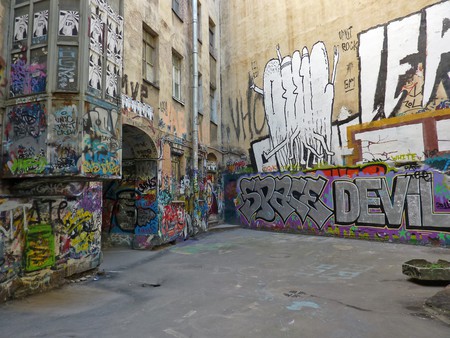 Russia’s rap battle scene is getting bigger by the year, with battles between big names watched by millions on YouTube. Russian rap isn’t just a stream of insults – although of course they are ever-present – but also involves complicated word play, literary references, and plenty of puns. Here’s your guide to the most-watched rap battles in Russia.

It all really started from this battle. Before the rap duel between Oxxxymiron and Johnyboy that brought attention to the battling scene, the Versus battle platform – which is now one of the leading rap battle organisations – had been in existence for two years, but barely anybody talked about it. The two contestants were previously on good terms, but when the relationship broke down, a battle was a must. Johnyboy initiated the battle, and to make even more of a point, invited five judges rather than three. All five awarded the win to his opponent though, and Johnyboy retreated from the rap scene, discontinuing his career.

This was Russia‘s most awaited battle of 2016, although to the disappointment of viewers there was no aggression that rap battles are famously loaded with. Despite Oxxxymiron’s victory, even he later commented that the judges were not fair, and the second round was played out far better by ST rather than by him. It was also the first time in his battling history that Oxxxymiron stumbled on his lyrics and was lost for words. This battle may have grabbed views for its disappointments, rather than rap battle milestones, but achieved 20 millions views nonetheless.

What can make a rap battle more entertaining? That’s right – alcohol. When one of the opponents has been drinking, there are really only two possible outcomes for a rap battle: it can be amazing, or it can be a total failure. Luckily for Obe 1 Kanobe, drinking enhanced his improvisation and he managed to remember his lyrics. The judges were so taken with his endearing stumbling about that they awarded him the win.

Hitting 15 million views in just three days, the rap battle between Oxxxymiron and Slava KPSS became the biggest event of the Russian rap scene in 2017. All five judges unanimously voted in favour of Slava KPSS over Oxxxymiron, who was previously undefeated. The most appealing element of this battle was that it was more than just a load of insults directed towards each other. These two rappers composed poetry on the spot, making complex literary references, and showing that both of them were masters of the Russian language.

This was a battle with unusual participants, as the two contestants to meet on the rap battle ring were video bloggers rather than actual rappers. However, they both put on a show no worse than their rapper counterparts. These two YouTube bloggers had a longstanding rivalry that they decided to take to a neutral territory where neither of them had any leverage. Their lyrics were naturally humorous, filled with inside jokes, but Hovansky did it just that little bit better, taking home the winning title.