Read the Prologue to 'The Long Hangover', a New Book on Putin's Russia 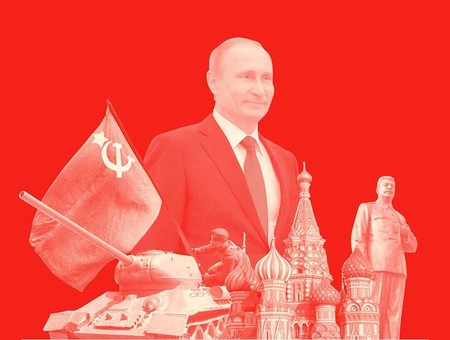 Described by the BBC’s John Simpson as ‘thoughtful, brave and full of insight’, The Long Hangover is a thoughtful examination of Vladimir Putin’s Russia, and how it has chosen to make sense of its complex past. Shaun Walker’s account not only provides a rich analysis of the political landscape, it also reveals the expertise of his reporting as he tells the story of this great nation through the eyes of its citizens.

The Long Hangover: Putin’s New Russia And The Ghosts Of The Past By Shaun Walker

There had been an autumn chill in the air for a few days, and even inside the seized secret police headquarters, it was cold. The Romanian did not seem to notice the temperature, apparently comfortable in his light military jacket and a single, fingerless leather glove. But he clocked me shivering, and declared it unacceptable that the town’s heating system had not yet come on. He had been to the power plant the previous day, he said, and laid down an ultimatum. They had a week to get things sorted or he would have the management shot for sabotage.

This might have been taken for bravado, were it not for the fact that the Romanian had organized two public executions in the preceding weeks. Most recently, a young man in his twenties had been caught looting by some of the Romanian’s men, and sentenced to the ultimate punishment. ‘He thought it was a joke until the last minute,’ the Romanian said, puffing his way through the latest in a steady stream of cigarettes held in his ungloved hand.

The young man was executed by a bullet to the back of the head, outside the shop from which he had stolen. A crowd of locals gathered on the street to watch.

Public executions seemed a little out of place in twenty-first-century Europe, I ventured. The Romanian shrugged. ‘Nobody blames a surgeon for the fact they remove tumours from the body with a scalpel. That is what we are doing here, with this society.’

Despite the name, he was very much Russian; ‘the Romanian’ was merely his pozyvnoi, a nom de guerre chosen because one branch of his family had roots in Romania. All the fighters I met during the war in eastern Ukraine had a pozyvnoi. There was the Amp (a former electrician), the Ramone (they were his favourite band), and the Monk (he’d never cheated on his wife). 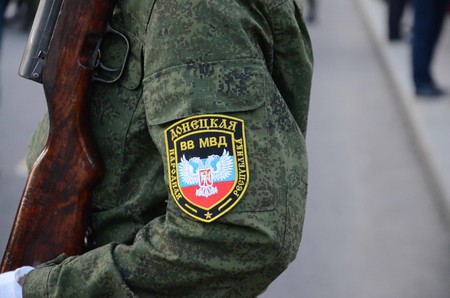 With their silly names, they often seemed like boys playing at war, but the Romanian was one of the serious ones. He radiated intensity, and had a clipped, military brusqueness when he spoke that bordered on disdain. Nevertheless, it was clear he enjoyed having an audience. He had griped repeatedly when our interview was set up that he did not have time to waste chattering with journalists. But when I arrived, he proceeded to talk about his fiefdom for three hours with little interruption, spraying literary and biblical references, ranging from the novels of Stendhal to obscure conspiracy websites about the Bilderberg Group. Tall and lean, with closely cropped greying hair and a neat, clipped moustache, he sat at the head of a long table, drinking over-brewed tea and ashing his cigarettes into a rusting old tuna tin. The walls were bare save for peeling light-blue paint.

The building had previously been the headquarters of the SBU, the Ukrainian security services, in the grimy mining town of Torez. Now, it was a heavily fortified base, controlled by the Russia-backed militias of the Donetsk People’s Republic, a lawless quasi-state that had come into existence a few months previously.

A retired Russian military officer, the Romanian now held the official title of Head of Counterintelligence for the Ministry of State Security of the Donetsk People’s Republic. In practice, this gave him license to act as a kind of vigilante ombudsman. A blonde woman, with gold hoop earrings, an elaborate manicure, and a combat jacket lined with faux fur, periodically entered the room to hand him sheets of paper, appeals from locals about looted property, or other grievances linked to rebel forces behaving badly.

He was trying to get to the bottom of one case of a local farmer, whose only cow had been pilfered by rebel soldiers. He had jailed several rebels for theft. The two public executions for looting were justified, he said, because only the lowest form of humanity would steal the few provisions remaining in the town. ‘In order to live by the laws of the New Testament, first we must live by the laws of the Old Testament; an eye for eye. If the people behave like animals, we will treat them like animals.’ 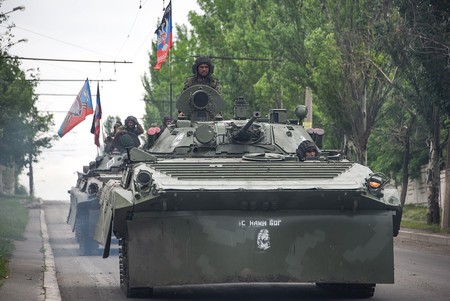 This was the Romanian’s sixth war. The first had been the Soviet invasion of Afghanistan, soon after he signed up. He became an officer in the Soviet and Russian armies, and later in an interior ministry special forces unit. There was no way of verifying his claims; he never even told me his real name. But I doubted he was lying.

Having been through the blood, mud, and brutality of both Chechen wars during the 1990s, he left the army. Afterwards, he tried his hand at civilian life, setting up a small construction company in Moscow. It was not a success, and he ended up working on the building sites himself to make a living.

The Romanian did not like corruption; his eyes sparkled with fury whenever he brought the subject up, which was often. If he had his way, he would have all the corrupt officials shot. Joseph Stalin had been right, he said; there may have been repression back then, but the country developed, and progressed, and that was the main thing.

‘Giving a bribe makes you feel like a gay. It’s like being raped. This repulsive man standing in front of you with a leering smile and his hand open. It’s disgusting. I never gave a single bribe when I was working in construction.’ He continued, pensively, after a pause: ‘That’s probably why nothing ever worked out for me.’

The Romanian had come to eastern Ukraine of his own accord, he insisted. Nobody had sent him. He made regular, informal reports to old friends in the Russian security services back in Moscow, but was spending his own small savings pot to subsist here. He had seen footage on the news a few months previously, of pro-Russian protesters burning to death in Odessa’s trade union building, a horrific event in any terms, but one that Russian television had upgraded to a Nazi-inspired pogrom. He decided there was nothing for it but to travel to Donetsk himself. Just as patriotic Russians had come together to defeat the Nazis in the Second World War, he said animatedly, it was again time to join in unity against the modern-day ‘Ukrainian fascists’ and their backers in Western capitals. On his lapel, he wore the orange-and-black St George’s ribbon. It marked the Soviet victory in the Second World War, and had become the symbol of the Donetsk rebels in this new war. 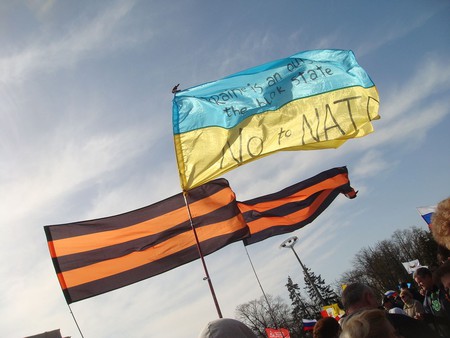 The national flag of Ukraine alongside the ribbon of St. George at a pro-Russian meeting in Odessa in 2014 | © HOBOPOCC / Wikimedia Commons

Although he despised the corruption of Vladimir Putin’s Russia, he was pleased that over the past year the president had done ‘at least something’ to restore Russian prestige, annexing Crimea and providing support to the rebels. The army was being revamped again; money was being spent on defence. Maybe soon, Russia would once again become a country of which he could be proud.

The Romanian’s trajectory over the past two decades was an extreme variation on a recurrent theme of post-Soviet malaise that I encountered during my years reporting from Russia and other former Soviet countries, first as correspondent for The Independent and then for The Guardian. He had lost his way in the aftermath of the Soviet Union; now, as he meted out summary justice on the battlefields of a messy war, he felt that he was finding his bearings again.

By any measure, his presence in Ukraine, commanding a ragtag bunch of armed separatists and ordering public executions, was illegal. But the Romanian did not consider himself to be outside his homeland. His home was the Soviet Union. That was the country in which he was born, the country to which he first swore a military oath, and the country that still lived on in his heart. He admired the coal miners and steelworkers of eastern Ukraine, ‘simple, hardworking and morally outstanding people’ who made him feel he was back in the Soviet Union.

The Romanian mourned the Soviet Union’s passing, but it was not quite right to say that he longed for its resurrection. His nostalgia was not about a devotion to Leninist philosophy. It was not necessarily even a striving for the same kind of lives people had lived before Mikhail Gorbachev’s perestroika and the subsequent Soviet collapse. What the Romanian really missed was something more fundamental.

‘We need to rebuild the country. The Soviet Union, the Russian Empire, it doesn’t matter what you call it. I want a Russian idea for the Russian people; I don’t want the Americans to teach us how to live. I want a strong country, one you can be proud of. I want life to have some meaning again.’ 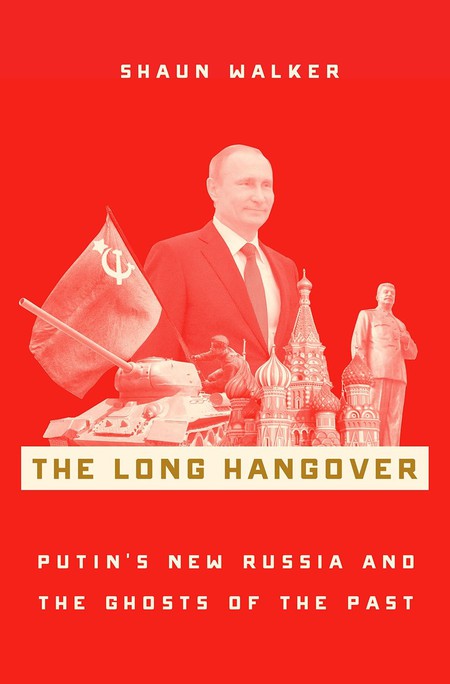