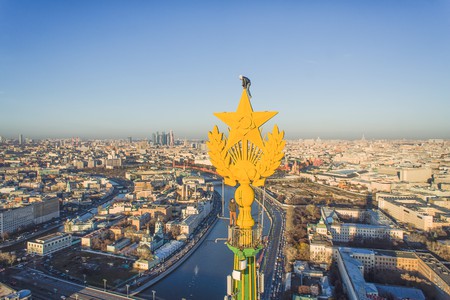 Other people his age collect shoes, clothes and followers. Kirill Vselensky collects buildings… and the occasional police charge. The 25 year old Muscovite belongs to a community of roofers – young Russians who climb the world’s tallest and most important structures around the world without any safety equipment.

Some do it for the thrills, others to make a political statement. In August 2014, four roofers were arrested for protesting Moscow’s support of separatists in eastern Ukraine by painting a Stalin-era skyscraper with the colours of the Ukrainian flag. Others who followed, including Vselensky, were also arrested.

It is no surprise that roofing was born in Russia – a country known as being one of the worst for government surveillance of its citizens. Others have described the act as ‘hacking’ the city by looking for cracks in the system. The act of roofing is both a reclamation of public and private space and a way of testing one’s own limits. Many of Moscow’s original roofers have amassed huge online followings as a result of their vertigo-inducing shots. While the admiration of a global online community is a bonus, most roofers share their photos for their contemporaries and to prove themselves within this competitive community. 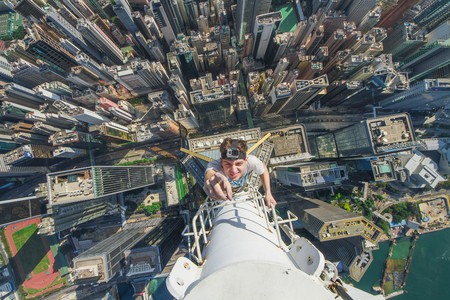 We caught up with Vselensky to gain an insight into the secretive world of roofing, and how his insatiable desire to keep on climbing has taken him around the world.

Culture Trip: How did you get into roofing?

Kirill Vselensky: I started by climbing onto the roofs of neighbouring houses and apartment blocks. I found the views to be very different from my own, and every time, I discovered something new about my home town. I also enjoyed taking other people up and showing them this new cityscape.

CT: What are your favourite roofing spots in Moscow?

KV: The abandoned building of the Mirax Plaza has one of the best views of downtown Moscow and its skyscrapers. The view has everything I like to look at: roofs, beautiful architecture, a river and a busy highway. But its also a difficult climb, because there is a lot of protection, even though construction has ended. There are some other places in the city centre, usually residential buildings, which are easy to climb with friends, and we’ll go and watch the sunset.

CT: Where has roofing taken you and how do you decide where to go next?

KV: I basically ran out of places to go roofing in Moscow. I’d climbed houses, bridges, power plants and monuments across the city. After that I decided to go to other countries and cities and see them from unusual points of view. When I travel to a new place, museums and parks don’t interest me. Instead I wonder how the city looks from above. I usually go straight to the centre and climb the first tall building that I’m able to get inside. 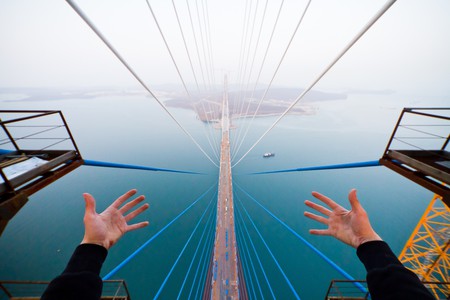 CT: How do you prepare before a climb?

KV: I don’t do any special training before climbing to the roof. Only I check if there is free space and that the camera is charged. Sometimes it is useful to look at the building from the side to see if it can be accessed from a neighbouring building or whether there is an exit to the roof (when it concerns monuments).

CT: How large is the community of roofers and urban explorers in Moscow?

KV: It’s hard to tell. More people are getting involved each year, but on the other hand its getting more difficult to get into some buildings. We started roofing in 2008, and there are now other communities of younger guys who started climbing much later and by our example. If you add up the number of people in the forums, I’d guess there are between 150-200 roofers in Moscow today. These are people who climb to different roofs. There are also those who know a few roofs and go regularly only to them – I would not call such people roofers. But there are a lot of them.

CT: What emotions do you experience during rooftopping?

KV: Every climb is an adventure. First I need to find a way to get inside the building by either picking up the code for the door, climbing the fence or deceiving the guards. Since I’m there illegally I get lots of adrenaline. After finding my way onto the roof, I experience such a mix of feelings. Above the bustle of the city, you can calmly watch life go by below. I feel the greatness of mankind, capable of building such large and complex things as a metropolis. 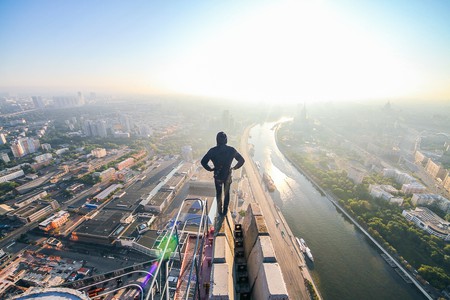 CT: Why do you think you’ve amassed such a big social media following?

KV: I think people like beautiful landscapes, especially urban landscapes. Many people start reading about me when they recognise their hometown in one of my photos and continue to follow my adventures.

CT: Where would be your dream place to go roofing?

KV: Surely the Burj Khalifa in Dubai. But as far as I know from friends, it’s unrealistic to climb to the top illegally. I also want to be in New York one day. Another interesting city for me is Mecca.

CT: What does urban exploration mean to you?

KV: I do it to satisfy my curiosity. I don’t just climb roofs, but also go underground. I find going down into metro tunnels and cable collectors very interesting! Firstly [it means] the satisfaction of my curiosity, and secondly it’s self-expression in the form of photographs and video.

Interested in amazing feats? Check out this list of unusual and dangerous sports including volcano surfing and powerbocking. For those who prefer to keep their feet planted firmly on the ground, here’s our guide to the most exciting utrarunners in the world today.