Make No Mistake, the Greatest WWII Novel is Russian 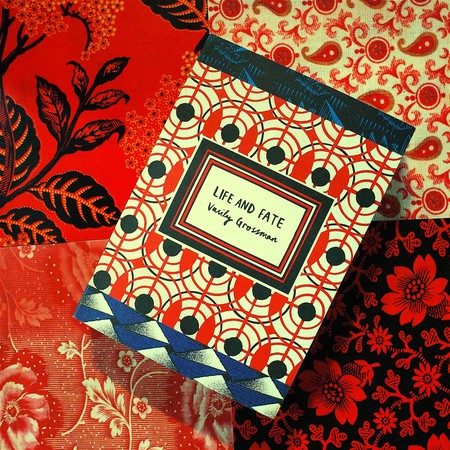 ‘Arrested’ by the KGB in 1961 after it was submitted for publication (one of only two manuscripts ever confiscated in this way by Soviet authorities), Vasily Grossman’s Life and Fate is an epic, dissident exploration of Eastern Europe’s darkest days. Set during and in the immediate aftermath of the Battle of Stalingrad, it chronicles the hardships of a diverse cast of characters brought together by their conflicts with totalitarianism—whether they be German, or Soviet.

“There is no question, he is the Tolstoy of the USSR, and this is the War and Peace of the USSR”—or so Martin Amis, speaking at a PEN America event in honor of Vasily Grossman, summed up the work. As with War and Peace, however, the sheer scope of Life and Fate can be a little daunting, especially to those tasked with writing its overview in less than 1,000 words. The author’s own remarkable life—a gradual transformation from party insider to dissident writer—should make for an easier introduction. 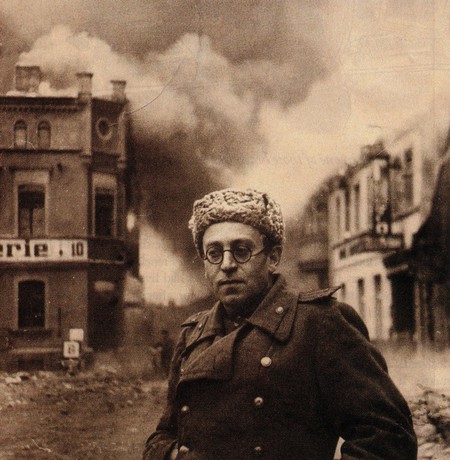 Vasily Grossman in Schwerin, Germany with the Red Army (1945) | Fair use / Wikimedia Commons

A writer at the heart of conflict

Vasily Grossman was born to Russian-Jewish parents in Berdychiv (Berdichev), Ukraine in 1905, and had a relatively eventful childhood; he was raised by a single mother from an early age, supported by his uncle, and spent a number of years in Switzerland and Kiev (he was staying in the latter during the revolution).

If he “realized his true vocation was literature,” as his translator Robert Chandler put it, while studying “chemistry at Moscow State University,” it nonetheless wasn’t until after the publications in 1934 of a critically acclaimed short story, “In the Town of Berdichev,” and the novel Glyukauf that Grossman became something of an establishment author. Before long, he had joined the Soviet Writers’ Union, was regularly nominated for the Stalin Prize (although Stalin himself ensured he did not win it), and survived the Great Terror unscathed—yet not without an act of bravery, lobbying the head of the NKVD (the ancestor organization to the KGB) to free his second wife after her arrest, and adopting her children so they wouldn’t be sent away.

Those actions were the first stirrings of a courage that would come dominate the next few years of his life; his exertions during the war certainly have something of the cinematic about them. After Berdichev was captured by the Germans in 1941, Grossman became a war correspondent for the Red Army newspaper, where his reporting became a favorite, “highly valued by soldiers and generals alike.”

The writer was present at the defense of Moscow and Stalingrad, and the fall of Berlin, and was embedded in the first Red Army to liberate Ukraine, where he learned his mother had been murdered along with most of Berdichev’s 12,000 Jews. Despite heavy censorship, he became the first journalist to write about the Holocaust in any language, and his piece on Treblinka was used as testimony in the Nuremberg trials.

After the war, Grossman bore witness to the Soviet Union’s own anti-Semitic stirs, incarnated by propaganda against “rootless cosmopolitans” and the infamous Doctors’ Plot (a supposed conspiracy of Jewish doctors against Stalin’s life). In 1952, at the height of the persecution, and after other former members of the Jewish Anti-Fascist Committee had been purged, Grossman signed a letter calling for the doctors’ harshest punishment—an act he would regret for the rest of his life. The oppression, which seemed to presage a second Terror, stopped immediately after Stalin’s death a year later. 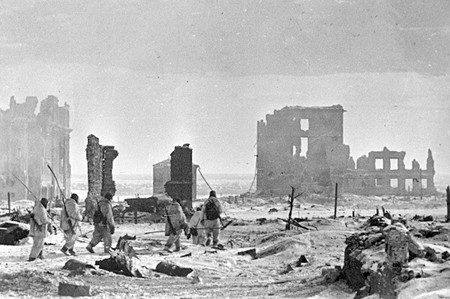 While saying so may leave one open to charges of oversimplification, there is no question that Life and Fate is rooted in Grossman’s experiences. To give a comprehensive slice of society, the novel follows, à la War and Peace, the lives of a wide cast of characters, all connected one way or another with a single family (in this case, the Shaposhnikovs). Yet the major markers of the writer’s life are all there. Its main character (to the extent that there is one) is Viktor Shtrum, a brilliant self-interested Jewish physicist married to one Lyudmila Shaposhnikova, and residing in Moscow.

From the book’s very start, Shtrum is harangued by feelings of guilt over his mother’s fate in occupied Ukraine. Throughout the novel, he himself gradually comes to be on the receiving end of state-sponsored anti-Semitism, put under pressure at work and made to sign—in a moment of weakness—a public letter denouncing two doctors for a conspiracy they clearly didn’t commit. The man’s moral conflicts, emerging from between his knowledge of the incompetence and horror of the state he works for, and his desire to pursue the scientific research he loves, provides the book with a recurring question: how is one to live, and love, when stuck between fascism and Stalinism?

One answer is found at the heart of it all, in wartime Stalingrad. For a few months in 1942 and early 1943, it wasn’t just the capital of the world war, but a “world capital,” as Grossman calls it. Unique not only because its fate was linked “with the fields and factories of the whole world,” but because it had its own divining spirit: “freedom.” Those left in its maelstrom—the soldiers, commissars, generals—were free from state oppression, to blaspheme against their government, to openly blame Stalin for the catastrophic defeats of 1941, and to equate the USSR with Nazi Germany, all the while fighting to save their beloved country.

The extensive Stalingrad scenes provide Life and Fate with its most gripping passages, enriched as they are with the kind of detail and precision that could only come from personal experience. But they do more than that: they give the book its ideological backbone, a defiant anti-totalitarianism that resonates throughout.

If Grossman does not shy from balancing Soviet crimes with those of fascism, it is nonetheless with the melancholy realization that the latter was only opposed by the former. The thought is raised by a range of characters throughout the novel, from an imprisoned Old Bolshevik waiting to be interrogated to Stalin himself on the day of Operation Uranus (the Soviet offensive that encircled and broke the German army at Stalingrad): the fate of Europe and humanity depended on the Red Army.

It is an idea illustrated with poignancy in the book’s darkest scenes, those concerned with the fate of Ukrainian Jews under Nazi occupation. Shtrum’s mother is shot and buried in a mass grave; Sofya Levinton, a friend of the Shaposhnikov family, is followed all the way to her death inside a gas chamber, in what must be one of the most devastating examples of literary realism I’ve ever read. The scene is followed thusly, as if to hammer home the Grossman’s central concern:

“When a person dies, they cross over from the realm of freedom to the realm of slavery. Life is freedom, and dying is a gradual denial of freedom. Consciousness first weakens and then disappears. The life processes—respiration, the metabolism, the circulation—continue for some time, but an irrevocable move has been made towards slavery; consciousness, the flame of freedom, has died out.” 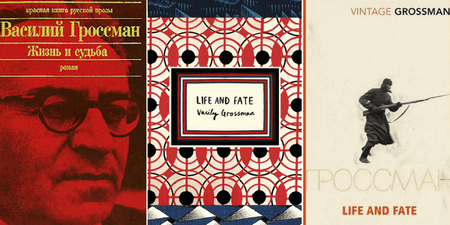 Three cover designs for Life and Fate, the first by Эксмо, the other two by Vintage classics | Courtesy of the publishers

In 1960, on the heel of a successful few years and at the height of Khrushchev’s de-Stalinization, Grossman submitted the manuscript of Life and Fate to a literary magazine. A few months later in 1961, “three KGB officers came to the flat,” Chandler writes, not to arrest the writer, but to confiscate everything that had to do with the book. A party dignitary later told him “that the novel could not be published for another two or three hundred years.” Its “lasting importance,” apparently, had not been questioned.

Grossman didn’t take too well to the ‘arrest’ of his work, and sunk into a depression, aging noticeably until his death from lung cancer some three years later. A manuscript left hidden at a friend’s was eventually smuggled out of the country in the 1970s, and first published in France in 1980 (it wasn’t in Russia until 1988). Life and Fate had finally achieved the freedom Grossman had begged Nikita Khrushchev give it, in a letter:

“There is no sense or truth in my present position, in my physical freedom while the book to which I dedicated my life is in prison. For I wrote it, and I have not repudiated it and am not repudiating it. …I ask for freedom for my book.”