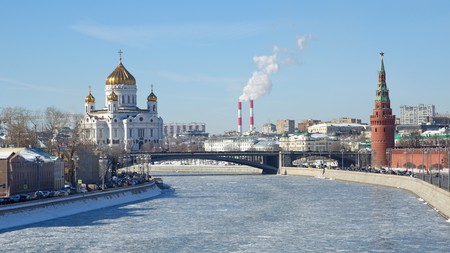 Moscow is a city of contrasts, and in 24 hours, you’ll see a lot of sides to the Russian capital. If you’re brave enough to head to the world’s most northerly megacity in winter, you’ll be rewarded with outstanding comfort food, breathtaking architecture and a glimpse into Soviet history.

Start your day with a wander through the café-lined streets of Patriarch’s Ponds (Patriarshie Prudy), the setting of the famous opening scene of Mikhail Bulgakov’s The Master and Margarita and the perfect place to find a cosy breakfast spot. Mari Vanna is second to none for a traditional Russian breakfast in a homely atmosphere, complete with a resident cat. Try the oladyi (fluffy little pancakes) with condensed milk, or the syrniki (pancakes made from cottage cheese and raisins) with sour cream. Reservations are recommended. 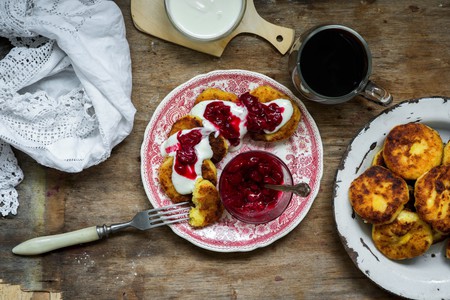 Take a walk through Moscow’s past

After breakfast, take the metro one stop from Tverskaya to Teatralnaya station to reach the heart of the city. The Moscow Metro, or Stalin’s ‘Palace for the People’, is decidedly the world’s most opulent. At Teatralnaya, spot the porcelain reliefs depicting traditional dress from across the USSR; the adjoining Ploshchad Revolyutsii station’s life-size statues show the participants of the Bolshevik Revolution (if you can find the dog, it’s said that rubbing his nose brings good luck).

No visit to Moscow is complete without seeing Red Square, home to the Kremlin and the iconic St Basil’s Cathedral, built in the 16th century under orders from Ivan the Terrible. Legend has it that after it was built, Ivan blinded the architect who made it so he could never build a more beautiful building. True or not, it’s undoubtedly one of a kind, even among Russia’s many eclectic churches, with its distinctive patterned and brightly coloured domes. 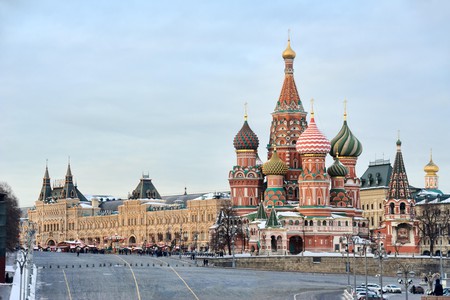 By the walls of the Kremlin, you’ll find Lenin’s Mausoleum where his body has been preserved since his death in 1924 (bar a few brief periods during wartime). While you’ll only be allowed a cursory visit, it’s an eerie historical relic to tick off the bucket list. An altogether cheerier way to spend the time could be skating on the seasonal rink that takes up residence each year next to the glittering lights of GUM, Moscow’s upmarket 19th-century shopping centre.

Take a walk in nearby Kitay-Gorod, one of Moscow’s oldest areas, where you’ll find icons of Tsarist Russia, such as the famous Bolshoi Theatre and the Hotel Metropol, the hotel of choice of foreign visitors from John Steinbeck to Mao Zedong. Decked out in a sea of Christmas lights, the newly pedestrianised Nikolskaya Street is one of the city’s top shopping streets. 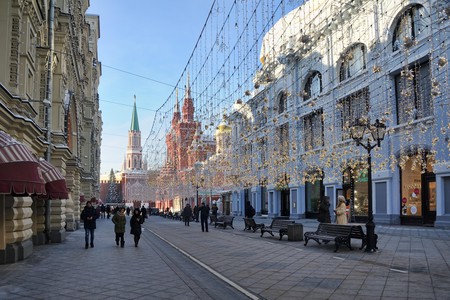 After a chilly morning of sightseeing, head to Varenichnaya No 1 on Nikolskaya Street for the perfect carb-filled antidote to the winter cold. Ravioli-like dumplings from across the former USSR are the order of the day. Try traditional flavours such as mushroom, cabbage or cheese, and even sweet variants like chocolate and raspberry (but maybe not all at the same time), all topped with lashings of butter and Russia’s beloved smetana (sour cream). The nostalgic Soviet-inspired decor is packed with old books and trinkets, so it’s almost a museum trip in itself.

Stroll by the frozen river

Walk or take the metro to the Cathedral of Christ the Saviour (metro: Kropotkinskaya), a site symbolic of Russia’s turbulent history. While you can find pre-revolutionary photographs of this opulent cathedral, this version is a replica. The original church was destroyed in 1931 to make way for the sci-fi-esque Palace of the Soviets, which would have been, at the time, the world’s tallest building. However, war efforts stopped its construction, and for many years, the site served as a huge open-air swimming pool. In the late 1990s, the cathedral was rebuilt, and in 2012, Pussy Riot staged a performance here that landed them in jail. From Kropotkinskaya, take the metro one stop farther south for a quick look at the palatial Park Kultury station, decked out with marble and chandeliers. 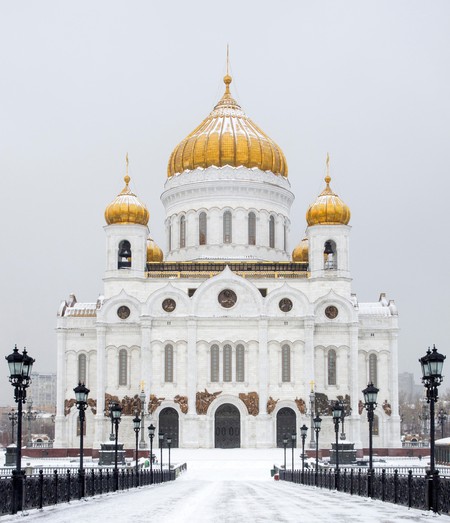 If you’re up for a walk, head to Sparrow Hills for panoramic views of the city (otherwise, shelter from the cold while admiring the Tretyakov Gallery’s comprehensive collection of Russian art). Take the red line onwards to Vorobyovy Gory station, and head down into the park to pick a path to meander up to the top of the hill.

At the top, you’ll have views over the whole city, while behind you is the imposing Moscow State University. One of Stalin’s iconic ‘Seven Sisters’ buildings, it was the tallest building in Europe until 1990, and its 33 kilometres (20.5 miles) of corridors house everything from a pool to a police station and a bomb shelter. See how many other ‘sisters’ you can spot – their monumental style is instantly recognisable.

Wander back down to the river and turn right for a scenic walk that will take you to Gorky Park. As the country’s first major public space, this was a Soviet project for the cities of the future – a place where everyone could relax and do sports. Ever a mirror of its time, after some bad years in the ’90s, it is once again a star attraction, with a rolling programme of concerts and festivals and a plethora of slick restaurants and cafés. In winter, it transforms into a lantern-lit maze of skateable rinks and paths and is the perfect place to curl up with some glintveyn (mulled wine) and some medovik (honey cake) and marvel at the sub-zero temperatures. 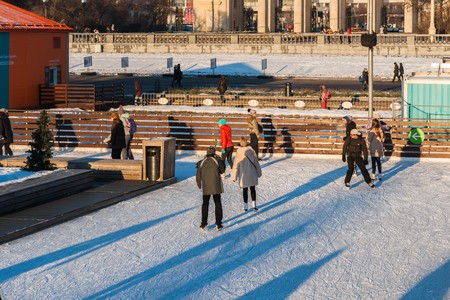 Moscow is one of the best places outside Georgia to get your hands on Georgian food, which makes a colourful and spicy contrast to Russia’s traditional fare. Khachapuri (14 Shabolovka Street), named after the tangy cheese bread that is a staple of Georgian cuisine, has a modern vibe and serves up tasty khachapuri, khinkali dumplings and vibrant Georgian mezze, to name a few. Wash it all down with a carafe of Georgian wine. 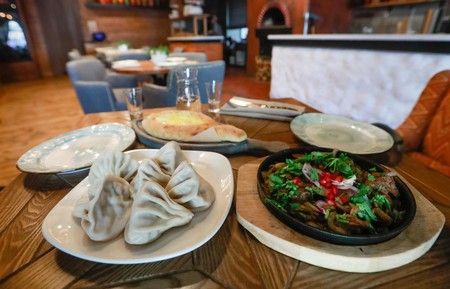 One of Russia’s most famous exports, vodka, is the drink of choice for celebrations. For the best experience, vodka should be kept in the freezer and served in ice-cold glasses. But be warned: a typical serving of vodka is a full 50 millilitres. To take the edge off, have a salty snack or some Russian rye bread. You can find a good selection of vodkas in most bars, but if you’re after a classier experience, try Oblomov near Dobryninskaya metro. It will remind you of a Tsarist-era country estate and offers upmarket vodkas as well as lesser-known Russian spirits in flavours from buckwheat to horseradish.

Party in an old chocolate factory

Situated right on the Moskva River, the former Red October chocolate factory now houses the Strelka Institute design school and is a prime hotspot for arty hang-outs. The Strelka Bar has a wide range of cocktails using fresh local ingredients and at prices below the going rate for such a central spot, with stunning views of the river. The nearby Gipsy nightclub boasts a huge dance floor and an eclectic soundtrack that should keep you dancing well into the night. 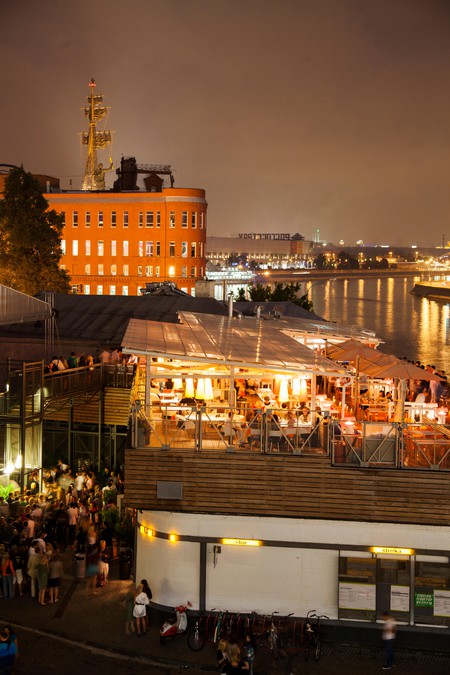